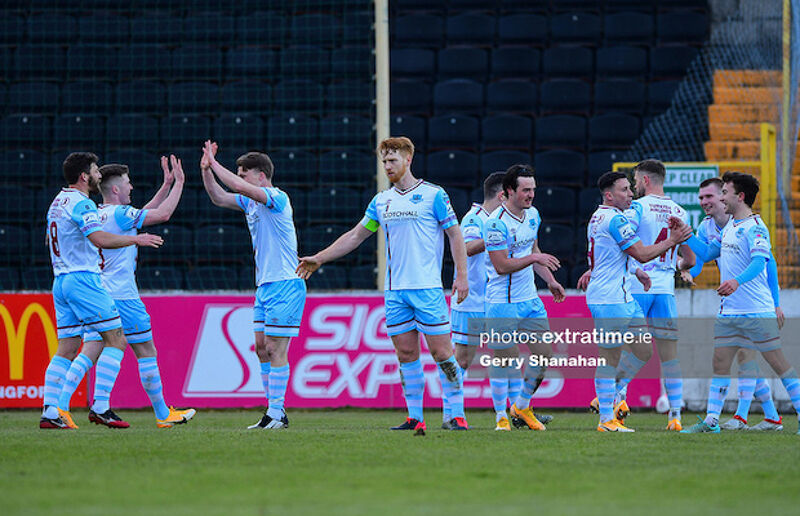 Where else to start this weekend’s stats roundup than at Finn Park where a last minute winner from centre back Dave Webster allowed Ollie Horgan’s men to pick up another three points, remain unbeaten and join St. Patrick’s Athletic on ten points at the top of the league table.

For Webster, it was the Harps captain’s first in the league since his goal against the Blues in a late 3-2 win last season. Incidentally, while he converted courtesy of a Barry McNamee corner kick this weekend, the same player provided the assist in 2020.

In a strange twist of fate, Waterford striker John Martin also scored in both encounters with Saturday’s goal also coming from a set piece as he nodded home Jamie Mascoll's free kick. As mentioned in last week’s stats roundup (see here), Waterford scored once directly from a set piece all last season.

Yet all four league goals to date in 2021 have been from dead balls. Jamie Mascoll has two assists - one from a free kick, one a corner, Shane Griffin netted from a free kick himself and Oscar Brennan converted the rebound from his missed penalty.

The first successful conversion of a Premier Division penalty in 2021 took place at Oriel Park as Georgie Kelly scored to give Bohs their first three points of the year. It was the second season in a row that an ex-Lilywhite named Georgie converted a penalty against Dundalk at Oriel Park following Poynton’s effort in Shels’ 3-2 defeat in 2020.

Shelbourne's goalkeeper that night was Cavanman Colin McCabe who had a much more successful trip to Louth in 2021 as he kept a clean sheet on his Drogheda United league debut - a 4-0 win against Longford Town this weekend.

Having recorded two shutouts for Shels in 2020, this meant he kept Premier Division clean sheets for two different clubs in consecutive seasons.

Another to achieve the same fate this weekend, though in the First Division this time, was the experienced Athlone Town netminder Micheál Schlingermann.

Having repelled Wexford FC in 2020 as the Galway Utd custodian, he denied Cork City this weekend as Adrian Carberry’s Athlone recorded a victory over Cork City courtesy of James Doona’s strike.

It means Athlone, after four games have half as many clean sheets as they had after 18 games of 2020. Incidentally, Athlone’s last league clean sheet of 2020 came away against Drogheda United.

Head in the Game

This weekend at Head in the Game Park, Drogheda’s 4-0 win saw Tim Clancy’s men record their first league win over The Midlanders since September 2018 - a run of six league games. Mark Doyle’s brace bringing him to three Premier Division goals for the season so far and on a streak of 16 goals in Drogheda’s last 20 league games.

The Seagulls recorded their second clean sheet of the season in a goalless encounter at UCD, meaning that Ireland under-21 goalkeeper Brian Maher has now kept a dozen clean sheets in 21 First Division games and is the first goalkeeper to keep a clean sheet against The Students in both 2020 and 2021.

UCD drew a blank on only three occasions in 2020 – Bray Wanderers and Galway United were the other two opponents.

Galway’s game against Cabinteely was called off due to a coronavirus issue this weekend so both clubs remain a game behind their fellow First Division inhabitants.

A man who scored against Rovers for Derry City in 2020 repeated the feat this weekend in the Clash of the Rovers - Walter Figueira’s opener for Sligo in their 1-1 draw was assisted by Niall Morahan, who himself scored against Shamrock Rovers in 2020 (and by a rare error by Hoops goalkeeper Alan Mannus).

For their part, the Hoops saw Seán Gannon involved in their late equaliser - his last two assists for Dundalk came against Cork City, one assist in the home encounter and one at Turner’s Cross.

The first side to visit the Munster venue this season were Cobh Ramblers who drew with Treaty United this weekend, picking up their first point of the campaign.

The Limerickmen on the other hand have taken a result from each of their three league games in 2021 - two draws and a win ensuring they remain unbeaten. However, a red card in all three games means they also remained without the full complement at the end of their games.

It was the recipient of their first red card, Seán McSweeney, who scored against Ramblers this weekend. Tommy Barrett made three changes to the starting lineup - Tadhg Ryan back in goal after picking up a slight injury against Bray, McSweeney returned following his red card in the same game and ex-Ram Charlie Fleming.

It was a night of mixed fortunes for the trio as McSweeney scored, Fleming was sent off and Ryan appeared to have been fouled for the Cobh equaliser.

From a Cobh point of view, their own scorer Darryl Walsh has now matched his league tally for 2020 - his solitary strike in the campaign coming in a 4-0 win against one of his former sides, Wexford. However, at underage level, the Waterford native hit the net more frequently - in 2017 he netted against Shamrock Rovers at both under-17 and under-19 level.

The Waterford under-17s won the League Final, beating a Sligo Rovers outfit for whom five of their starting XI were involved in League of Ireland squads this weekend - three against Shamrock Rovers.