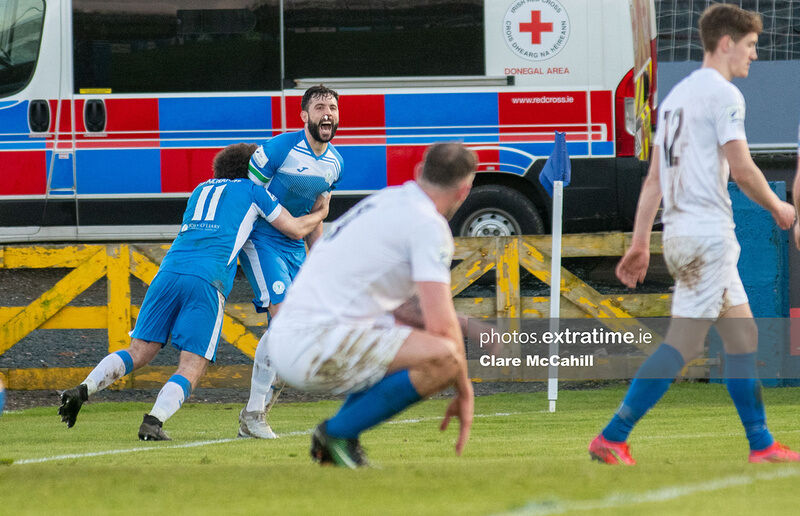 A 35th minute John Martin header was cancelled out by an Adam Foley equaliser five minutes later. Finn Harps created the better chances in the second half but it looked as if the game was set for a draw before David Webster found himself free inside the box and drove the ball into the net to gift all three points The Harps.

Waterford will be bitterly disappointed with the manner of the defeat. It looked as if they had clung on to claim a valuable point away from home, but on the balance of play, especially in the second half, Finn Harps definitely would have been the disappointed side had the game ended in a draw.

Played in a chilly Ballybofey, it was a very scrappy opening 30 minutes, as both teams struggled to string any passes together, and the opening exchanges almost resembled a tennis game as long hopeless balls kept both keepers on their toes.

Barry McNamee did have half a chance when the ball fell to him just outside the box 14 minutes in, but the Harps midfielder was unable to hit the target as his left footed shot dragged harmlessly wide.

If there were to be any chances in the opening half, it looked as if it may come from a set piece, and 35 minutes in, Waterford found a breakthrough. Prince Mutswunguma delivered a beautiful in swinging free kick and it was John Martin who rose highest inside the box as he connected well to head past Mark Anthony McGinley in the Finn Harps goal.

That Waterford lead lasted just five minutes, however, as McNamee got on the end of a long ball forward. He teed up an incoming Karl O’Sullivan who laid it off to Adam Foley. Foley showed real composure inside the area as he picked his spot slotting it past Brian Murphy into the back of the net.

The sides went in level at the break, with both sides taking their one and only chance of the half in what was a cagey first half affair.

The second half started much brighter, and Finn Harps almost took the lead two minutes in. Karl O’Sullivan’s left footed shot had Murphy at full stretch to make a very decent save tipping it behind for a corner, which was subsequently cleared.

Finn Harps certainly looked the most dangerous of the two sides and they played with a lot more urgency in the second half. Set pieces were causing problems for the Waterford defence, and 66 minutes in, it was McNamee again who delivered a dangerous cross from a corner. Murphy had to deal with a number of bodies in front of him as well as a dipping sun. When he came to claim the cross, he almost dropped the ball into his own net, but he did well to recover and keep it from crossing the line.

Daryl Murphy had a huge chance on the 74th minute mark to give Waterford the lead. He had a free header on the six-yard box following a promising cross from Tshipamba Mulowayi, but he was unable to direct his header away from McGinley who made a comfortable save.

As the game wore on, despite Finn Harps having the better chances, it looked as if the game was destined for a draw. However, Webster had different ideas. It was a McNamee corner again which caused the Waterford defence serious problems. The ball fell kindly to the feet of captain Webster, and he made no mistake as he buried the ball to the roof of the net in the 91st minute to break Waterford hearts at the death.

Waterford did manage to work the ball up the other end but to no avail, as Finn Harps held on to claim all three points and continue their unbeaten start to the season and re-join St Patrick’s Athletic as joint leaders at the summit of the Premier Division table.