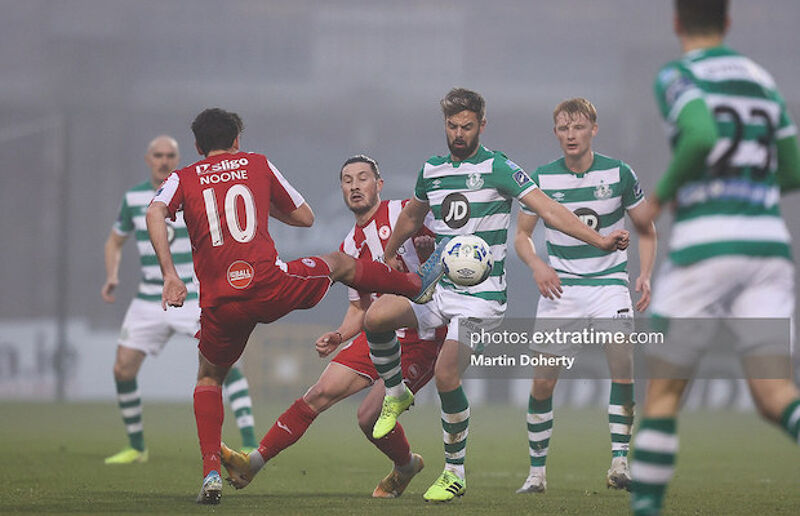 Liam Buckley’s men have begun the new season in fine form and the unbeaten Bit O’ Red welcome the champions to the Showgrounds on Saturday evening for the 6pm kick off.

Having drawn 1-1 at home to Dundalk on the opening night of their season they followed that up with away victories over Waterford (2-1) and Longford Town (1-0).

“It was a tricky game last week in Longford and we came away with the win which we were very pleased with,” said Buckley ahead of the Saturday's game.

“Our points total is very good from the three games and I see us getting better in terms of performance. I know there is more in the group here.”

Last Monday the Bit O’ Red played a friendly game against Finn Harps. “We had what was really a training exercise on Monday. It was for players who needed some minutes because of various circumstances.

“I was happy with what we showed in that game. There are good players trying to get into the team whether that is starting or coming off the bench. We know there are good options available to us at the moment.

“This game is really about another three points being on offer. It’s the same in every game in the league. The opportunity is there and we have to do our utmost to take it.

“We know it’s going to be a tough ask. Shamrock Rovers won the league at a canter last season. They’ve brought more good players into their club in the off-season.

“That said, we have as well. We have to compete well, work hard and give it our all to get something out of the game. I can see it being a tight game. We’ve got to produce the right performance to give ourselves the chance to get the result.”

The Hoops come into this game in the Showgrounds with four points on the board from their two games played and on the back of last week’s 2-1 win over Dundalk.

“It’s always nice to get off the mark and get up and running,” said Hoops Head Coach Stephen Bradley when speaking about his team’s first win of the season.

“When you watch the game back I felt we deserved it and we’re really happy to get the first three points on the board.”First half we were excellent, controlled the game and created chances. In the second half we did well but went too deep which allowed them to get a lot of crosses into the box.”

The Rovers victory was secured thanks to goals from Danny Mandroiu – his first for the Hoops - and Dylan Watts before a late Pat Hoban Dundalk goal made things a bit tighter than they would have liked.

“It was a fantastic strike,” said Bradley about Mandroiu’s goal. “He can strike from distance, left or right foot and now he’s off the mark. His all-round game is getting better every week.

“It was good to score (the second goal) because we weren’t in control. We had taken Graham Burke out at that stage. He was probably the best player on the pitch but he’d been booked and we needed to be careful. We couldn’t afford to lose him.

"Dylan was ready to go and he’s shown that on the pitch the last few weeks. When he came on he played really well and got a good goal.

“We should have been out of sight at that point with our chances, the offside goal and the penalty incident but in the end the game was a lot closer than what it should have been really. Once they got the goal it became a bit of a nervy ending because they’d so many in the box and were obviously pushing to try and get the equaliser."

The Hoops have gone 24 league matches unbeaten – their best run for 94 years. “Its a tremendous record to have. We know at some point it will come to an end but right now I think this group are enjoying it and will only get stronger and better the more games they play together.

“They’ve shown real glimpses of what this team will be and shown great quality at times. It’s a great record and one that we’re proud of. We’ll try and continue it for as long as we can.”

The Hoops won 3-2 in Sligo last year – the last match that played in front of fans. In Tallaght the home side won 4-0 in the league and 2-0 in the FAI Cup semi-final. The Bit O’ Red though are unbeaten so far this season.

“They’re doing well. I felt last year they were a strong team and nothing has changed this year. They’re a strong team with threats all over the pitch. It’s going to be a tough game on Saturday but it’s one that we’re ready for and looking forward to.”

The last time Sligo beat the Hoops was in May 2019 – a 2-1 win in the Showgrounds. Daryl Fordyce and Jack Keaney scored for the home side with Dan Carr getting the goal for the Hoops.

The Hoops are chasing their all-time unbeaten record in the league – that was 30 games without defeat stretching from January 1926 to November 1927.

Greg Bolger will face his former club on Saturday. He played 75 competitive matches for the Hoops across three seasons in Tallaght.

Stephen Bradley on Danny Mandroiu: 'He has been excellent. He has worked really hard and his attitude has been first class. He scored the goal tonight but there is a lot of work that he has done behind the scenes to get to this point.'https://t.co/cIaR6ALvjE pic.twitter.com/RwWckIT1Yj