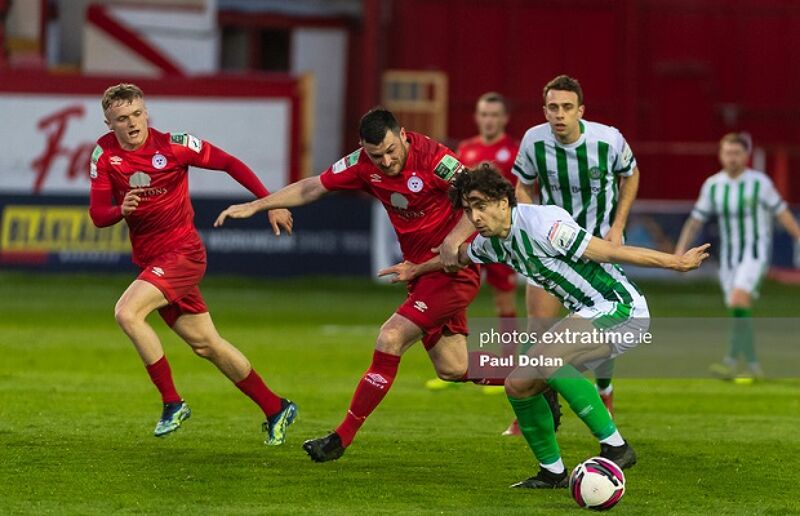 The Reds are looking for their first win of the season when Wexford visit Tolka Park on Friday. Credit: Paul Dolan (ETPhotos)

Unbeaten Shelbourne will take on the challenge of pointless Wexford in what promises to be an entertaining encounter in the SSE Airtricity League First Division at Tolka Park tomorrow evening (kick-off 7.45pm).

The Reds are hoping to jumpstart their promotion aspirations by registering their first league win of the season against the hapless Wexford in front of yet another empty Tolka Park as life without fans continues for another while at least.

The side from Richmond Road treated us to an absolute thriller last Friday evening when they drew 3-3 against Bray Wanderers in a topsy turvy affair at Tolka Park giving full value for fans who have signed up to watch the League of Ireland streaming on WatchLOI.

Ian Morris’ side started the game brightly and deservedly took the lead after 16 minutes courtesy of a Georgie Poynton goal but this sparked the Seagulls into life and they quickly drew level thanks to Brandon Kavanagh on 24 minutes.

The visitor’s joy was short lived and Shelbourne regained the lead just three minutes later with Ryan Brennan getting on the scoresheet.

The score line stayed the same until the break but the game was turned on its head in six second half minutes when Ryan Graydon made it 2-2 and then Brandon Kavanagh’s second of the night put Bray in front for the first time.

Shels fought back and earned a share of the spoils with Georgie Poynton netting from the spot with 15 minutes left on the clock.

Shelbourne boss Ian Morris was pleased with his side’s efforts and is keen to focus on the plusses telling the club’s website, “It’s about us working on the little details now to build on the positive elements that have been there.

“They’ve been unlucky in their games so far and have been really solid just missing out slightly against Treaty last week.”

Shelbourne are currently unbeaten with two draws from their two league matches so far having also drawn 0-0 away to Galway United at Eamonn Deacy Park on the opening weekend of the League season.

Ian Morris will have to make do without the services of the injured Gerardo Bruna and the suspended duo of Glen McAuley and Luke Byrne.

Wexford will make the trip up the M11 to the capital with hopes of putting a dent in Shelbourne’s title ambitions by taking three points back to the sunny south east.

Brian O’Sullivan’s men put in a resilient display last Friday night at the Markets Field but succumbed to a narrow 1-0 defeat to the newly formed Treaty United despite the home side going down to ten men for the final quarter of the game.

The away side had the better start and a through ball to Jack Doherty invited a chase but he was thwarted by the alert Treaty United keeper Shane Cusack.

Then, Tommy Barrett’s men took the lead after 26 minutes when Jack Lynch headed on a Marc Ludden free-kick for Anthony O’Donnell to make history by finishing from close-range.

The game fizzled out and the home side went into the break 1-0 to the good.

The Shannonsiders looked comfortable after the interval and the more likely to extend their lead but this was made very difficult when Clyde O’Connell was dismissed for a second bookable offence in the 65th minute after a fairly innocuous challenge.

Treaty United shut up shop for the remaining twenty-five minutes and Anthony O’Donnell marshalled the troops to maintain their clean sheet and edge out Wexford 1-0.

This was the second consecutive League defeat for Wexford in what has been a disappointing start to the campaign for Brian O’Sullivan’s charges having gone down 2-1 to Cabinteely at Ferrycarrig Park on the opening weekend of the season.

The Wexford boss has a number of selection headaches ahead of the trip to Drumcondra tomorrow evening with Jack Connolly, Paul Fox and Jack Doherty joining long-term casualties Anto Dolan and Cameron Power on the sidelines.

In addition, Alex O’Hanlon and Harry Groome on loan from Shelbourne will be unavailable for selection.

Shelbourne and Wexford last met each other competitively during the 2019 season in the SSE Airtricity First Division with Shels winning all three matches 3-0 and 5-2 at Tolka Park and 2-1 at Ferrycarrig Park.

Shels and Wexford have played each other 34 times in all competitions since 2007 with Shelbourne boasting the better head to head record with 19 wins to Wexford’s 7 with 8 draws.

Shelbourne are in 6th place in the SSE Airtricity First Division on 2 points with 2 draws from their 2 league matches.

Wexford are in 9th place in the SSE Airtricity First Division on zero points with 2 defeats from their 2 league matches.