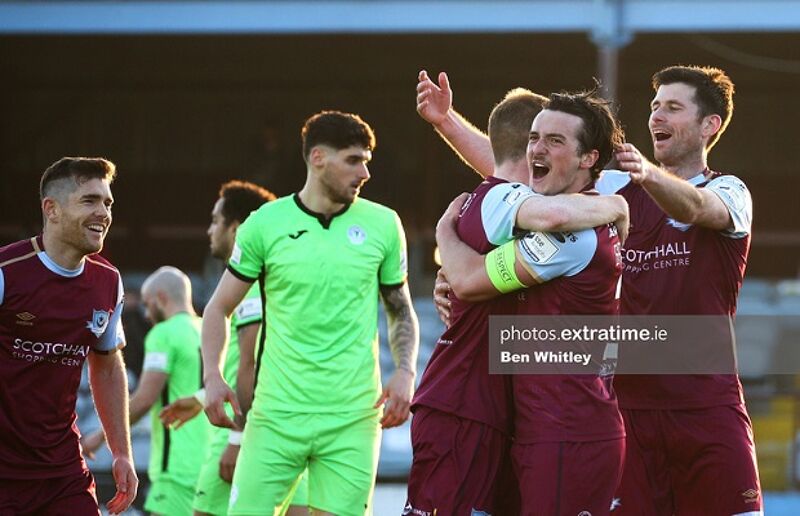 Finn Harps remain unbeaten this season after Drogheda’s Mark Doyle cancelled out a Karl O’Sullivan rocket in a scrappy 1-1 draw at Head in the Game Park.

There was a lack of quality throughout the game, but Drogheda dominated the final half an hour but neither side could find the winner.

The opening half was rather forgettable. The only chance of the half fell to Mark Doyle after Drogheda countered through Gary Deegan who played Doyle in down the left-hand side. Doyle beat his man and his shot from inside the box was straight at McGinley.

Adam Foley showed the confidence of a man who is top scorer in the Premier Division. He looked lively throughout with some nice flicks, and some penetrating runs. His movement saw him get on the end of Barry McNamee’s through ball and his early shot was saved by David Odumosu in the Drogs goal.

The first half petered out at a whimper as neither side could put a string of passes together to create a chance.

The second half sprung into life when Mark Russell tried his luck from 30 yards and Odumosu let the ball slip through his fingers. Fortunately, the ball went over the bar for a corner.

The opening goal arrived after 56 minutes. David Webster’s long throw was headed away but it fell to Karl O’Sullivan on the edge of the box who unleashed a first time low bullet that flew into the bottom right corner to give the visitors the lead. A contender for goal of the weekend.

Tim Clancy turned to his bench and introduced Darragh Markey, and it paid dividends. He was involved in a great team equaliser that saw Murray dink the ball in behind for the onrushing James Brown who squared it for Mark Doyle to tap home for his first goal of the season.

It was a case of de ja vu for Drogs as it took them falling behind to finally start playing football. They dominated proceedings from the moment they went a goal in arears.

James Brown and Darragh Markey linked up excellently down the right and Brown’s goal-bound shot was superbly blocked by Kosovar Sadiki to deny a certain goal.

Daniel O’Reilly was booked after a crunching challenge on the industrious Barry McNamee that saw tempers flare on both sides.

Gamechanger Markey was involved in everything good about Drogheda since his introduction linking the play and he put a dangerous ball back towards the penalty spot but to no avail.

Drogheda failed to make use of promising set piece positions with some shocking deliveries at times and wasteful passes.

James Brown nearly turned provider again at the death but his ball was superbly cleared by Sadiki denying Corcoran the chance to tap home.

In the end a draw was a fair result in a game that won’t live long in the memory.