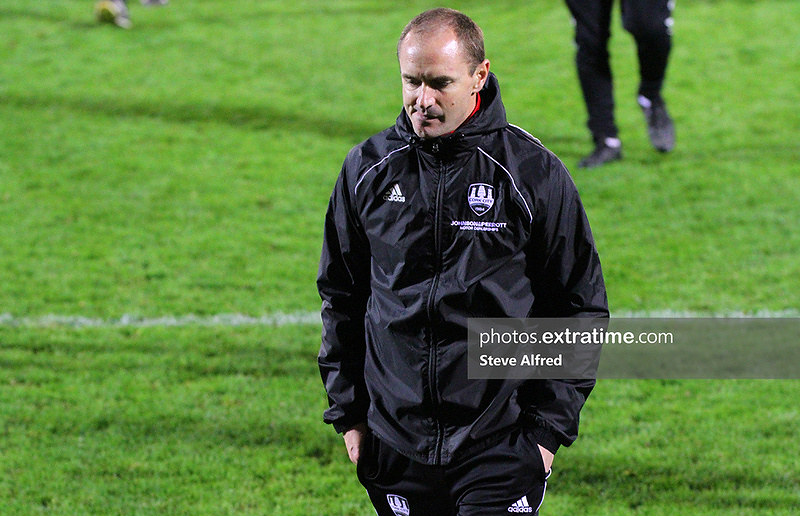 Cabinteely sit atop the Airtricity League First Division tonight after a 1-0 home win over Cork City.

An own goal from the visitors’ centre-half George Heaven was enough to give them all three points from a lacklustre encounter in Stradbrook. Both sides entered the game off the back of 2-1 wins in their first games of the season last weekend.

City had beaten Cobh Ramblers at home despite a middling performance, while Cabo had gotten the better of Wexford at Ferrycarrig Park.

The prize for tonight’s winners was a two-point lead at the top of the table, and Cork City looked the more likely side to take it in the opening exchanges. An early corner from Dylan McGlade had the host’s goalkeeper Adam Hayden in trouble, but the ball evaded everyone on its way across the six-yard box. Gearóid Morrissey then forced Hayden into a good stop from twelve yards after Cian Bargary’s long throw was only half-cleared.

An iffy pitch meant that a set piece looked the most likely route to goal, and the next action of note came after another McGlade flag-kick in the 21st minute. George Heaven’s header looked to be goal-bound but Dean Casey was in the right place to hook the ball clear.

Cabinteely found it difficult to maintain possession and their forward-looking players were left isolated as a result. A scramble in the away side’s area after a free-kick midway through the half was as close as they came, apart from a misplaced backpass from Heaven that briefly had McNulty worried as it bobbled for a corner.

The end of a somnambulant first half would have come as a relief to neutrals.

A switch from three to four at the back by manager Pat Devlin gave the hosts a more enterprising shape in the second half, allowing them to probe City’s wings more often and more effectively. Still City threatened from dead balls, with McGlade’s free-kick deflecting just wide of the wall.

However Cabinteely hit the front after 55 minutes. Labutis threatened down the right, and his cross was sliced past McNulty by the luckless Heaven. City were briefly roused but found it difficult to impose themselves on a more confident home side.

Jack Walsh’s introduction for Cian Murphy gave the Leesiders more of a threat up front and he came desperately close midway through the second half.

City continued to huff and puff but Hayden looked secure. McGlade’s cutback from the left was fired goalwards by Walsh, but the Cabinteely stopper was in the right place. A flurry of corners in injury time was to prove equally fruitless and the hosts held out comfortably.

Cabinteely are top of the table at this early juncture, while City must be wondering if this new season is to be as frustrating as their last.