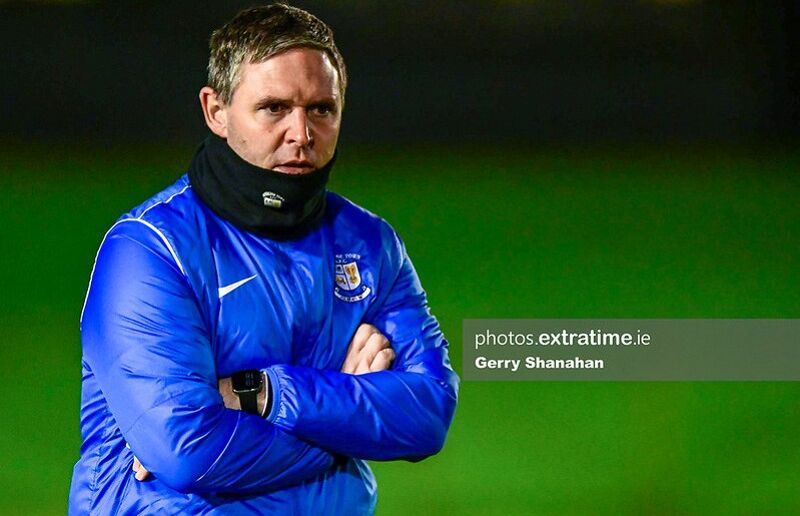 Athlone Town produced an impressive performance to cruise to a comfortable 3-1 victory against a fancied Galway United side in Athlone on Friday night.

An own goal from Gary Boylan and two goals from Stephen Meaney in the opening 30 minutes was enough to seal all three points. Substitute Wilson Waweru pulled one back for the Tribesmen, but the Athlone men held on to secure their first three points of the campaign.

Had there been fans in Lissywollen for the opening 45 minutes and indeed the 90 minutes, Athlone certainly would have gotten a standing ovation, such was the quality of their performance. They played with confidence, and they gave the Galway defence a torrid time in the first half, with a sense of shock visible on the faces of the Galway defence at half time.

Galway did start well and almost opened the scoring inside the first five minutes. Conor McCormack’s in swinging corner was met by the Ruari Keating at the front post, but his header glanced just over the bar.

However, it was the Athlone men that broke the deadlock 11 minutes in. Adam Wixted did brilliantly to dispossess Galway left back Stephen Walsh’s attempted clearance. The ricochet fell into the path of Wixted who raced down the right side. He laid it off to Aidan Friel on the overlap, who whipped in a dangerous cross which was met by the unfortunate head of Gary Boylan, who turned it into his own net.

Athlone grew into the game from there, and they doubled their lead just six minutes later. A ball over the top fell kindly to Wixted again on the right-hand side, and he sent Stephen Meaney through one on one with a neat header forward. Meaney made no mistake in rifling the ball to the roof of the net, to give The Town a two-goal lead inside the opening 20 minutes.

The wide channels were causing Galway all sorts of problems in the opening half and remarkably Athlone made it three with just 26 minutes of play gone. A long, seemingly harmless ball out wide found James Doona on the left. He beat Killian Cantwell and sent a cross into the danger zone. Meaney arrived at the back post and made no mistake of burying the ball into an empty net for his second of the night and Athlone’s third.

Chances did dry up for the remainder of the half. Galway threatened with some dangerous set pieces but were unable to break the Athlone defence. The referee’s half time whistle was a relief to John Caulfield and his team bringing an end to a nightmare opening half for the Tribesmen.

Galway did start much brighter in the second half and almost pulled one back five minutes after the restart. Mikey Place delivered a dangerous ball in, which bounced around the danger zone. It eventually fell at the feet of substitute Wilson Waweru, but he was unable to hit the target as his shot sailed just wide of Schlingermann’s left post.

Four minutes later, and at the opposite end to the field, Galway keeper Conor Kearns was at full stretch to tip Kurtis Byrne’s effort over the bar from just outside the box after Wixted had done well to tee him up.

Galway did settle well into the game and piled the pressure on the Athlone defence, with substitute Mikey Place and Waweru both looking dangerous.

As they packed players into the box, they left themselves open at the back, and 61 minutes in, Athlone almost capitalised and added a fourth. Aidan Friel raced onto a loose ball in behind the Galway defence and it was a three on one scenario. Galway did manage to clear but the clearance fell to Wixted who unleashed a rocket from well outside the box, which cannoned off the crossbar.

Galway pulled one back 76 minutes in. Schlingermann came to claim a long ball but he mishandled it and it fell to the feet of Waweru, who slotted it in, to give the Tribesman a glimmer of hope.

Almost straight after, Athlone captain Kurtis Byrne rattled the crossbar. A long ball bounced harmlessly over to Byrne just outside the box. He hit it first time, and the ball beat Kearns in the goal, but failed to clear the crossbar as he hit the underside of the bar, and away to a Galway defender, who cleared his lines.

Galway did create some late chances, with Wilson Waweru going close, but it was Athlone’s night as they held on to claim all three points.