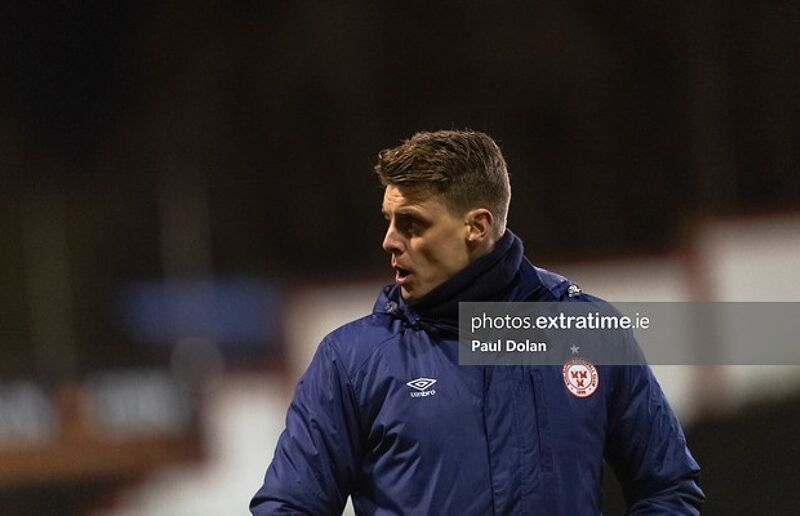 Two of the favourites for promotion go head to head in a heavyweight clash when Shelbourne play host to Bray Wanderers in the SSE Airtricity First Division at Tolka Park tomorrow evening (kick-off 7.45pm).

Shels will be looking to register their first home win of the season and get their promotion push firmly underway minus the support of the Drumcondra faithful due to the ongoing restrictions imposed by COVID-19.

Ian Morris’ charges made the tough trip to the West last Friday night to take on Galway United at Eamonn Deacy Park and came away with a hard earned 0-0 draw. In treacherous conditions both sides showed a lot of endeavour and created problems for both defences but neither side to break each other down in the opening period.

Shels prospects were dealt a hammer blow just four minutes from the interval when Gareth McAuley was given his marching orders for a reckless two footed lunge on Galway’s Maurice Nugent. It was a case of all hands on deck in the second period with some heroic defending and graceful goalkeeping ensuring that the game ended with a share of the spoils.

Shels boss Ian Morris hopes to turn Tolka Park into a fortress and to play a brand of exciting football telling the Shelbourne FC website, “We are aiming to create a number of chances, to entertain and excite people at home. The fans need joy and we want to bring them that.”

Ian Morris will have make do without the services of Gerardo Bruna who sustained an injury against Bray Wanderers as well as both Gareth MacAuley and Luke Byrne who will be unavailable due to suspension.

The Seagulls make the relatively short trip up the M11 with hopes of upsetting their illustrious hosts by notching their first league win of the season.

Bray had the enviable task of welcoming newly formed Limerick based side Treaty United to the Carlisle Grounds last Sunday afternoon for an historic fixture but could only fire blanks an play out a 0-0 stalemate.

The onus was on Bray to take the game to Treaty United but they found the Shannonsiders defensive organisation a tough nut to crack. Clear cut chances proved very hard to come by and the Seagulls were under pressure from set-pieces where Treaty United caused Bray a lot of problems from.

However, any chance that Tommy Barrett’s men had of taking maximum points were all but dashed when Sean McSweeney was dismissed for a second bookable offence after a clumsy challenge on Richie O’Farrell. Bray huffed and puffed but couldn’t blow Treaty’s house down and the teams had to settle for a point each.

The last time Shelbourne and Bray Wanderers met each other competitively was in the 2019 season in the SSE Airtricity First Division when Shels came out on top winning 1-0 home  and away and the final match ending in a 0-0 draw at Tolka Park.

Shels and The Seagulls have met each other 21 times in all competitions since 2005 with the Drumcondra side having the bragging rights with ten wins to Wanderers five and six draws.

Shelbourne are in 5th place in the SSE Airtricity First Division on 1 point with 1 draw from their only league match.