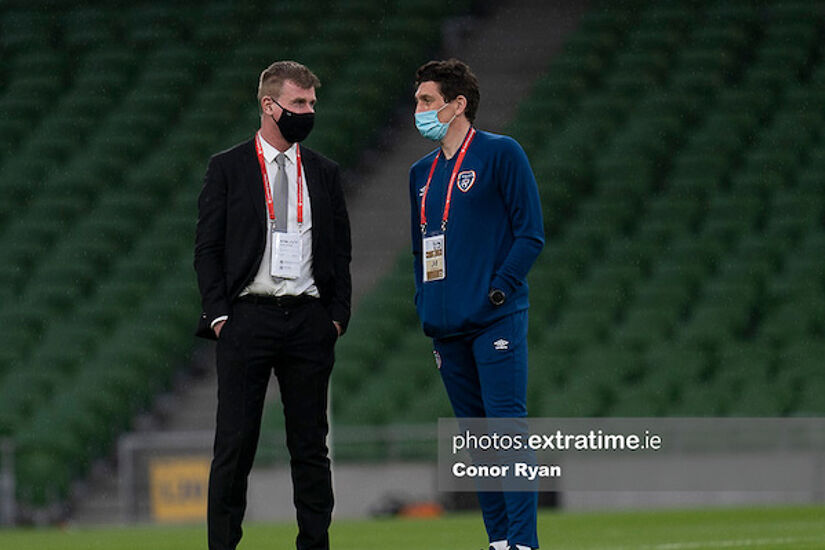 Opinion: Any Stephen Kenny departure would have detrimental effect on Irish football

The Republic of Ireland slumped to a 1-0 home defeat to Luxembourg on Saturday evening in the Aviva Stadium extending the winless run for the Boys in Green to 11 games with Stephen Kenny yet to get a win as Ireland boss.

On the plus side, there is a noted change of playing style and an emergence of young Irish talent throughout the Nations League campaign and into the World Cup qualifiers with goalkeeper Gavin Bazunu impressing on debut against Luxembourg.

Despite this, questions are being asked about manager Stephen Kenny reflecting Ireland’s dour run of results. Since his appointment, the Boys in Green have drawn four games and lost six. They have only scored three goals, with two coming in last week’s 3-2 loss against Serbia.

There are calls for the former Dundalk manager to be shown the exit door at the FAI. Kenny is steeped in the League of Ireland and his departure would have a knock-on effect for domestic Irish football.

The Tallaght man joined the FAI as Ireland under-21 manager in 2018 providing a boost for the League of Ireland even if he was departing from the dugout within the domestic league.

Two years previously, the senior men’s team qualified for the European Championships with a squad including plenty of graduates from the League of Ireland having come through a qualifying campaign which saw victories over world champions Germany and Bosnia. In the EURO2016 finals, the Republic of Ireland made it to the last 16 of Euro 2016 with a memorable 1-0 win over Italy.

Wes Hoolahan, a star of Shelbourne’s 2004 long European campaign, crossed the ball in for Robbie Brady’s goal against the Italians. James McClean, who came through at Derry under Stephen Kenny, scored the goal to beat Wales and send Ireland through to the play-offs for the 2018 World Cup.

The performances that summer coincided with a resurgence of Irish clubs in Europe. Cork City reached the third qualifying round of the Europa League and were narrowly knocked out by Genk, who went on to reach the quarter finals. Dundalk beat FH and BATE Borisov to qualify for the play-off round of the Champions League. Their run was ended by Legia Warsaw, but the Lilywhites progressed to the Europa League group stages, where they earned four points.

This kind of investment into the League of Ireland is always needed, as clubs are heavily reliant on gate receipts. The reliance was cited in a report from UEFA in 2017, which stated that 31% of a total €11m revenue for Premier Division clubs came from attendances. That was the third highest proportion behind Scotland (37%) and Switzerland (34%).

The unsuccessful 2018 World Cup campaign saw more graduates of the League of Ireland make the step up, such as Sean Maguire who came on as a substitute against Moldova that October.

Shamrock Rovers’ Graham Burke, in a friendly against France just ahead of the World Cup, becoming the first League of Ireland player to score for Ireland since 1978. Matt Doherty, who trained with Bohemians in 2009 and 2010, put the ball into the back of the net to guarantee Ireland a play-off spot for Euro 2020. Jack Byrne earned four international caps during his time with Shamrock Rovers.

The appointment of Stephen Kenny in 2018 as manager of Ireland’s Under-21s was a vote of confidence in the League of Ireland. This was a huge change in mindset from the early 2010s when former Ireland manager Giovanni Trapattoni said there is “no league in Ireland” and FAI CEO John Delaney called the league a “difficult child for the organisation”.

Kenny’s appointment, and his footballing style, resonated with the wider football community, with 4,772 turning up to see Kenny’s first under-21 game, against Luxembourg, in March 2019. This was quite a turnaround from the 1,588 who turned up for Ireland’s opening qualifier for the 2017 European Under-21 Championships in 2015.

Prolonged bad results will certainly lead to discussions on Irish football’s future and may mean the early departure of Stephen Kenny. That would have an impact on the future relationship between the national team and the League of Ireland. The picture is a lot bigger than a few missed opportunities in front of goal and some bad results for the Boys in Green.