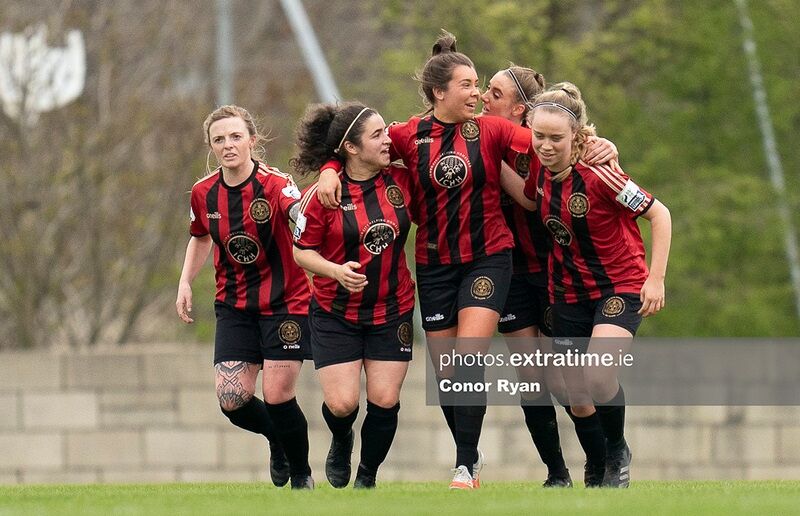 Bohemians were the big winners on the opening day of the Women’s National League season as they trounced Treaty United 6-2 to climb to the top of the table.

Bronagh Kane and Aoife Robinson scored a brace each, either side of strikes from Naima Chemaou and captain Sophie Watters, as Bohs set an early marker at the Oscar Traynor Complex.

Kane set the ball rolling with two goals in the space of 37 seconds inside the opening ten minutes, while new signing Chemaou marked her debut with a smart third.

Captain Watters made it 4-0 before goals either side of half time from Aoife Cronin and Shannon Parbat halved the deficit.

Robinson added a late double to seal a comprehensive win for Sean Byrne’s side, however, who have already matched their win tally from last season, when they finished bottom.

Galway and Cork City played out a six-goal thriller of their own at Eamonn Deacy Park, with Rachel Kearns’ first-half hat-trick not enough to seal the win for Galway.

Kearns struck twice in the first quarter to give Galway a commanding lead but goals from Lauren Egbuloniu and Eabha O’Mahony levelled things up eight minutes before time.

Within a minute, Kearns had her hat-trick and Galway led once more, but Becky Cassin buried a fine five minutes from time to ensure the points were shared.

Youths captain Kylie Murphy had a chance to put her side in front three minutes earlier but she saw her penalty strike the post.

Ryan Doyle took full advantage, and the winner was worthy of winning any game, a fine effort from 30 yards that left Keev Gray with no chance.

And Shelbourne also had to be patient as Pearl Slattery and Alex Kavanagh netted in the final quarter to earn a 2-0 win over a stubborn Athlone Town side.

Captain Slattery opened the scoring in spectacular style 22 minutes from time when she played a one-two with Emily Whelan before picking out the top corner from 20 yards.

And Kavanagh sealed the win just four minutes later as the Noel King era got off to a winning start in the midlands.