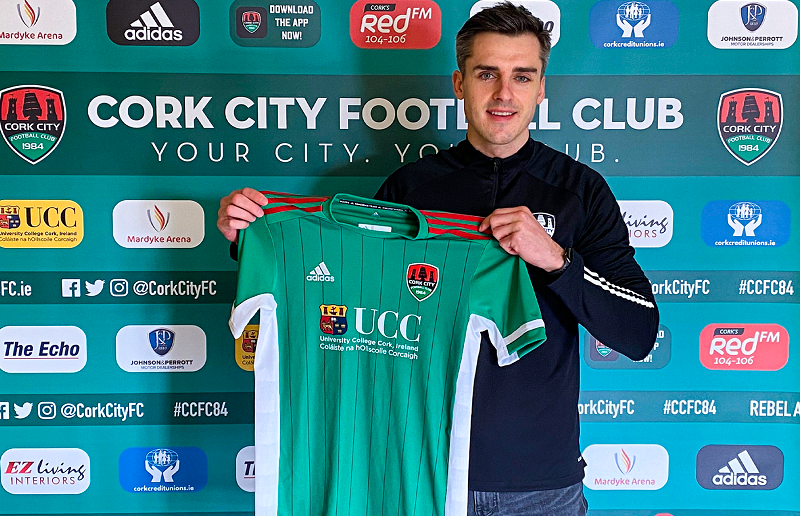 Walsh is one of many players from the Munster Senior League to step up to the League of Ireland this year. Credit: Cork City FC

The forward joins the club after an incredibly successful spell at the Dale, which earned him FAI Intermediate Cup and Beamish Stout Senior Cup medals in 2019.

The same year he also played in the Avondale team which qualified for the FAI Cup proper after beating Newtown Rangers on penalties.

Walsh is also an accomplished hurler, having played with Valley Rovers and Cork’s intermediate team.

“I am delighted to sign for such a great club,” he told the club’s media team.

“I’m really looking forward to working with Colin and the team and to doing my part to try and help the team back to where it should be.

“There is a good young group there, with a number of experienced players in there as well. I’m a number 9, I can hold the ball up, get others involved in attacking areas and, hopefully, get a few goals.

“I want to try and force my way into the team if I can; my main focus is to play as many games as possible and to score as many goals as I can.”

City boss Colin Healy welcomed the latest addition to his squad, adding: “Jack has been in training with us for a few weeks and he has done very well.

“He has good experience; he has trained very well and he did well in the friendly against St. Pat’s recently.  It is a great opportunity for him and I know it is one he is keen to take.”

Walsh is one of many players to make the move from Avondale to Cork City in recent seasons. Club legend Mark O’Sullivan, who won the 2016 FAI Cup with City, was signed from the Munster Senior League club.

Walsh is one of many players from the Munster Senior League to step up to the League of Ireland this year.