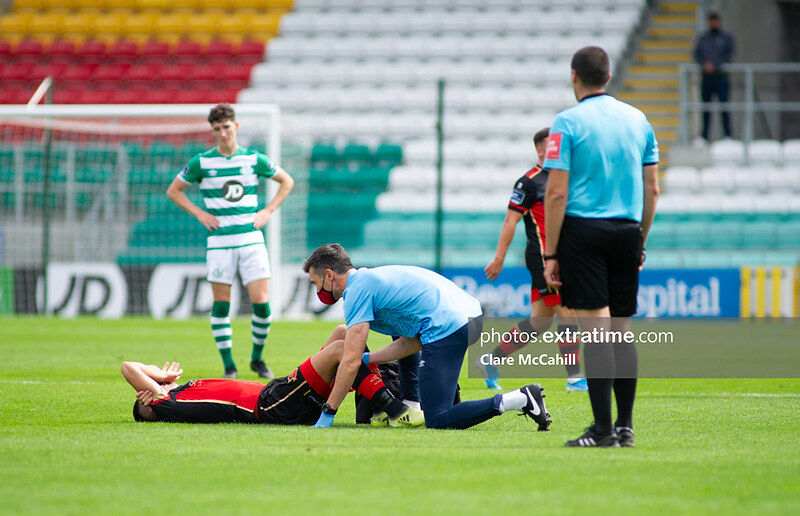 The FAI have announced that they are going to trial a new concussion protocol in the upcoming League of Ireland and Women's National League season.

In a statement the FAI said that the "IFAB had confirmed their approval to  League of Ireland Director Mark Scanlon."

Protocol B, which is being promoted by FIFA and Uefa,  will be implemented and this will allow for two permanent concussion subsitutes per team in a game with no numerical or tactical advantage. This wll hopefully allow medical and coaching staff to focus solely on the players welfare when assessing head injuries.

If a player is deemed to have a head injury, he may be replaced and this change will not impact on his teams limit of three subs, while the opposition team may also make a change in order to counter the change that has been made, again at no cost to their substitution limit.

League of Ireland director Mark Scanlon commenting on the news, said he was looking forward to having this in place for the new campaign.

“The FAI is delighted that the Protocol B Concussion Substitute guidelines will be utilised in the new League of Ireland season, beginning with the President’s Cup on March 12.

“We have worked on this plan with our Medical Director Dr Alan Byrne since IFAB first approved such trials in December and we have opted for Protocol B with the approval and full support of the Board of the FAI, the National League Executive Committee, Women’s National League Committee and our clubs. We have also worked closely with the referees via our Referee’s Department and they have given the implementation of these Protocol B concussion substitute rules their full backing.

“This approach prevents a player sustaining another concussion during the match as multiple head-injury incidents can have very serious consequences. It also sends a strong message that, if in doubt, the player is withdrawn but there is no numerical or tactical disadvantage to either side by prioritising the player’s welfare.

“The rule reduces the pressure on medical personnel to make a quick assessment and is simple to operate.”

The FAI's medical director Dr. Alan Byrne has also produced a video with information for all relevant parties in the League of Ireland, while Dr. Byrne welcomed the news.

“FIFA and UEFA have been involved for many years in research around concussion and this is a development which I very much welcome. I don’t think we can ever be done with educating and making people more aware of this topic.

“The season long trial is part of the knowledge gathering around the whole area of concussion. We hope to gain some knowledge around the types of injuries that can cause concussion, help build our knowledge base and put us in a better position to make decisions around the welfare and safety of our players.”