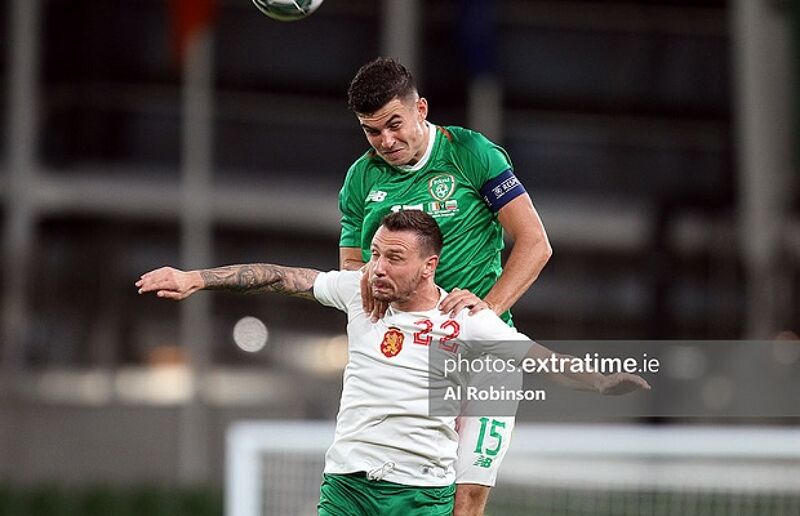 Egan stayed down following an innocuous-looking collision with Jesse Lingard and was treated for several minutes before being fitted with a protective boot. Credit: Al Robinson (ETPhotos)

Stephen Kenny has been dealt a selection headache ahead of next month’s World Cup qualifying opener in Serbia as John Egan was stretchered off with a potentially serious leg injury.

The Corkman sustained the injury during Sheffield United’s 3-0 defeat to West Ham United on Monday night, a game which saw the return from injury of Enda Stevens.

Egan stayed down following an innocuous-looking collision with Jesse Lingard and was treated for several minutes before being fitted with a protective boot.

"It didn't look too good with the stretcher," said manager Chris Wilder.

“He's on crutches now and that caps a miserable night for us. He’s a tough Irish boy so for him to stick his hand up wasn’t a good sign."

John Egan appears to have sustained a serious foot/leg injury.

28-year-old Egan has been a mainstay in the Irish defence since Kenny took over last year, starting all of Ireland’s competitive games until he missed the final two Nations League game with injury.

With Shane Duffy enduring an unhappy spell on loan with Celtic, and Dara O’Shea having lost his place at West Brom, Kenny’s options suddenly look a little stretched at the back.

There are also question marks over the fitness of first-choice goalkeeper Darren Randolph, who hasn’t featured for West Ham since picking up a knock in early January.