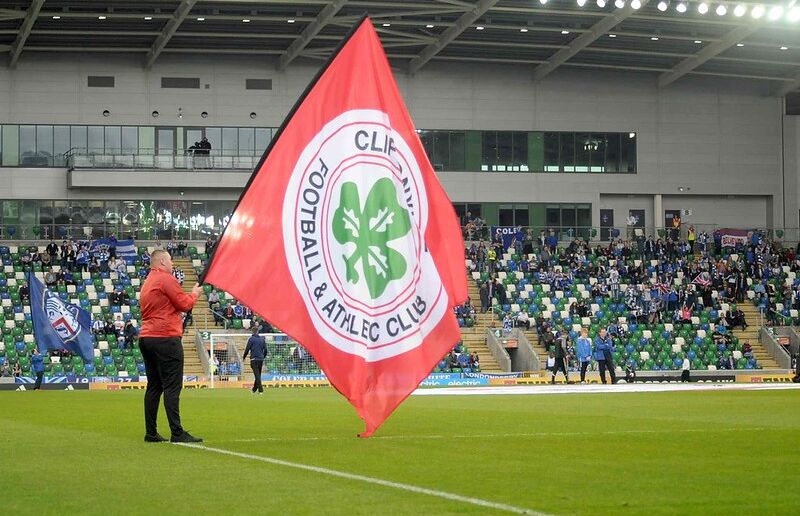 Cliftonville came from behind twice to earn a dramatic 4-3 win over arch-rivals Linfield at Solitude this evening.

The Reds win over their bitter Belfast rivals saw them move level on points with Ballymena United, although they have played two games more than Ballymena so far.

Linfield took a 12th minute lead through Jordan Stewart before they were swiftly pulled back in the 18th minute by Michael McCrudden.

The Blues retook the lead midway through the first half via Charlie Mulgrew. However, they were too fall behind in a nine-minute spell that saw Conor McMenamin score twice.

And Ryan Curran made sure of the win late on in the 90th minute through Ryan Curran who slotted home inside the penalty area.

Linfield scored a consolation in injury time though Kirk Millar, but it was not enough to earn David Healy’s side a point.

Elsewhere, Coleraine extended their winning run of form to five games on the spin thanks to a 2-1 win away to Larne.

Two early first-half goals from Stephen Lowry and James McLaughlin set the Bannsiders on their way to a big win.

Albert Watson scored what turned out to be a consolation goal in the 74th minute as the Inver Park side fell to a 2-1 defeat at home to Coleraine.

Declan Caddell opened the scoring for the Crues in the 25th minute. But Stephen Baxter’s side were pegged back in the 39th minute by Adam McCallum.

Crusaders went ahead again in the 49th minute through Paul Heatley. But Heatley’s goal was not enough as Bonis fired home a dramatic equaliser.

Glentoran returned to winning ways thanks to a 2-0 home victory over Carrick Rangers at the Oval.

Jay Donnelly and Robbie McDaid both scored for the Glens as they saw off Carrick.

The games between Warrenpoint Town versus Ballymena United, and Dungannon Swifts versus Glenavon were called off.