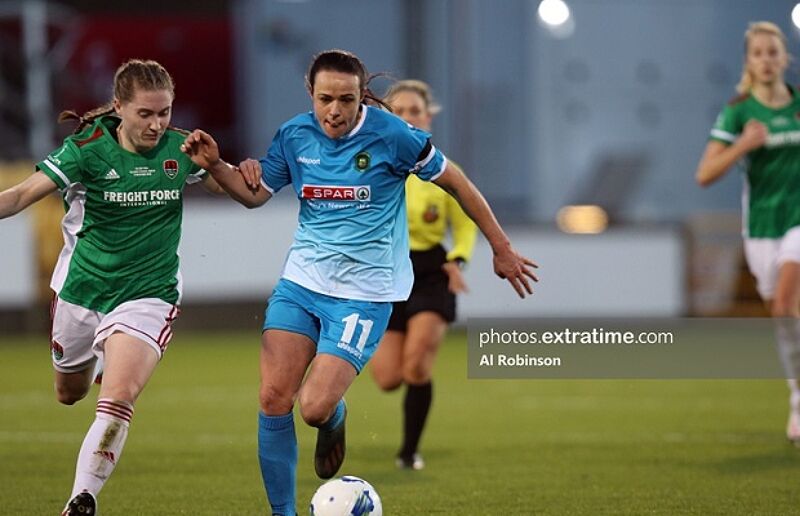 Fresh off the back of a double winning 2020 campaign, Peamount United captain and Republic of Ireland international is relishing the new challenge that awaits the Peas in 2021.

Peamount won the FAI Cup Final thanks to a comprehensive victory against Cork City in December, just weeks after they clinched the league title with a win at home to Shelbourne.

But despite their 2020 double winning exploits, the 31-year-old is wary that the chasing pack will pose to both her and her teammates in 2021, none more so than Shelbourne.

The Reds have recently appointed former Republic of Ireland boss Noel King as their first-team boss – and O’Gorman is relishing that prospect of battling it out for the title with Shels again.

“Noel will bring in a different dynamic to that Shels team who are full of top, and talented players,” she told extratime.com.

“It’s going to be a big challenge playing Shels this year. I know Noel very well; I would have played under him with the international set up.

“He was really good and always knew how to get a result. He is a top coach. It’s great to have him back in the league and it will probably push us on even more.”

And Peamount will have to defend their title without the services of Niamh Farrelly who has made the move to Glasgow City.

21-year-old Farrelly joins Glasgow – a full-time professional outfit – and Enniskerry native O’Gorman is hopeful that she can push on in her newfound environment.

“She has a great attitude and is a really hard worker,” she noted. “Niamh (is) probably one of the players who has improved the most since I’ve been at Peamount over the last three years.

“Niamh has a very professional attitude and she’ll do really well. She’ll adapt to it well and is a good team player and has an abundance of talent, so the future is very bright for her.”

Peamount recently appointed Alban Hysa as the club’s new under-19 boss ahead of the inaugural under-19 Women’s National League campaign.

And the inaugural under-19s Women’s National League is something that O’Gorman views as a positive step for all involved in the women’s game at underage level.

“I think it’s really important to help bridge the gap between the under-17s and senior level,” she noted.

“To keep young players at under-17s playing at a good level gives them a good incentive to keep playing and not see them drop off. It’s a good progression and step going forward.”