Shelbourne's Jack Brady: 'I'm glad that I put in the hard yards over the last few years because I'm reaping the rewards of it now' 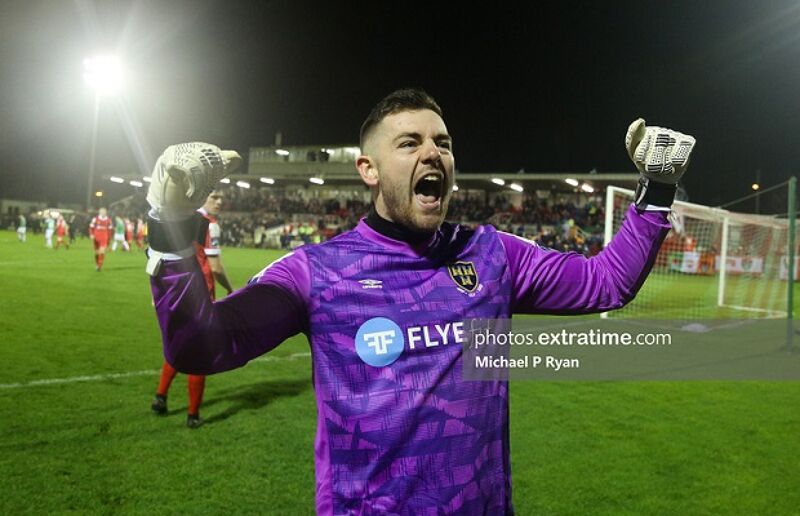 A year is a long time in football, and for some, like Shelbourne goalkeeper Jack Brady, while it was long, it was also rewarding.

The man from the Tipperary-Clare border town of Killaloe-Ballina completed his Professional Master of Education degree in DCU in 2020 – which qualifies him as a secondary school teacher.

And he also played a pivotal role for the Reds in their unsuccessful battle to survive in the Premier Division.

Currently, the 24-year-old is now working full-time in teaching, while also preparing for the 2021 League of Ireland season.

After a challenging 2020 in the top-flight with the club he made his name at early on in his career, Brady is raring to go ahead of this season, whenever that may be.

“I’m glad that I put in the hard yards over the last few years because I’m reaping the rewards of it now,” the goalkeeper admits.

“During lockdown, I have a full-time job and play football, so it was worth putting the work in.

“You could probably go through the motions with college and football if you wanted to, but for me, it was all about committing to things fully.

“The last few months taught me the importance of structure and not taking things for granted and going through the motions.”

Formerly of Longford Town and Limerick, the former Co. Tipperary minor footballer was part of a Shelbourne squad that was paid right through the Covid-19 break last year.

And that, he says, was reassuring at a time when it was difficult to find many certainties in everyday life.

“Obviously with how things went both before and after the break – with us getting relegated – was extremely disappointing, but the club were unbelievably professional paying us through the lockdown,” he noted.

“I have to say the club were fantastic with us through their professionalism.”

He added: “I’m incredibly grateful to the club over the past year for what they did for us.

“It was badly needed, not just for me, but for a number of players as well, and I do appreciate that.”

Shels won two of their opening four league games last season – with both wins coming at Tolka, where upwards of 3,000 people packed into Tolka Park on both occasions.

By the time their next league came around against Waterford on August 1st, Shels were playing in front of a smattering of club officials at a deserted Richmond Road venue.

“To go from sold-out games to having nobody in the ground was very difficult,” Brady said. “I think that cost us a bit because Tolka is a cauldron and the fans are incredible – they were brilliant last year.

“The one thing I regret the most was letting them down because that buzz was back in Drumcondra.

“I think by getting relegated; I think the wind has been taken out of that buzz a bit. It feels like another rebuild and we will be going for the league (in 2021).”

The Reds shot-stopper also felt that he pushed on as a player in 2020 – after spending much of his early days in the First Division – despite relegation.

“I think I improved a lot even if it was in a short season,” he said. “There’s nowhere to hide, the games are on tele, and the players are better. That’s the kind of thing you want to be dealing with.”

He added: “Working with a coach like Paul (Skinner) helps because he knows me inside and out as a player and a person.

“Paul is a massive character and has brought me on hugely in my career. I trust him and we have a good relationship.

“I think that is important because it means you can be open and honest with him about things and know that it will only benefit you and him in the long run.”

During the 2020 campaign, Brady was battling with Colin McCabe as the first-choice goalkeeper at Shels.

And ahead of the 2021 season, the 24-year-old will now be battling it out with Brendan Clarke for the Shelbourne number one jersey.

“I know it’s me versus one person for a jersey, but it’s a great opportunity to learn from them,” he said.

“In Brendan, it’s a great opportunity to learn from somebody who is so experienced. I know that I will be a better keeper from picking up bits from both Paul and Brendan this season.”

Midway through the 2018 season, while at Limerick, Brady decided to leave social media – something that he feels has helped him focus on his professions as a footballer and educator.

“One of the things I became aware of was how people talk about players,” he admitted.

“By staying off social media, it allows me to be as professional as possible in both my occupations. I can then also have a personal life where I don’t have to be always on edge about what I say or post.

“That was one of the main reasons why I left social media. It allowed me to entirely focus on my jobs and personal life, without always needing to think about what I’m saying in public.

“In the two professions I’m in, I have to be incredibly diligent and professional. By not indulging in social media, it allows me to be the best version of myself.”

And that is something that the Co. Tipperary native has found with age and experience in recent years: “I’m entirely focused on myself, and the opinions of others have never really bothered me.

“When you look back, you realise that the only person you need to impress is yourself. Once you know that, you don’t think about posting pictures of winning games.

“That comes with age and experience because when players go into the league, they’re young, and I don’t think people realise how difficult it is to break into a team.

“When you’re at that age, you’re going to want to post pictures and selfies. But as you become older and more experienced, that becomes less important.”

He adds: “What becomes more important is how you can contribute to the team you’re in and not worry about yourself as much.

“I think that’s the most important thing I’ve learned over the last couple of years. You don’t need to be impressing people (outside); you need to impress yourself.”

But as far as 2021 goes for Brady on the pitch, he will be looking to push on once more, this time in a highly-competitive second tier.

“You can never tell with the First Division, and I think that’s the beauty of it,” he finishes. “You can never switch off because one team could always make a late run.

“There’s always something to play for and this year; it looks like there’s going to be huge budgets in comparison to previous years. I think that’s going to make it an exciting division.”