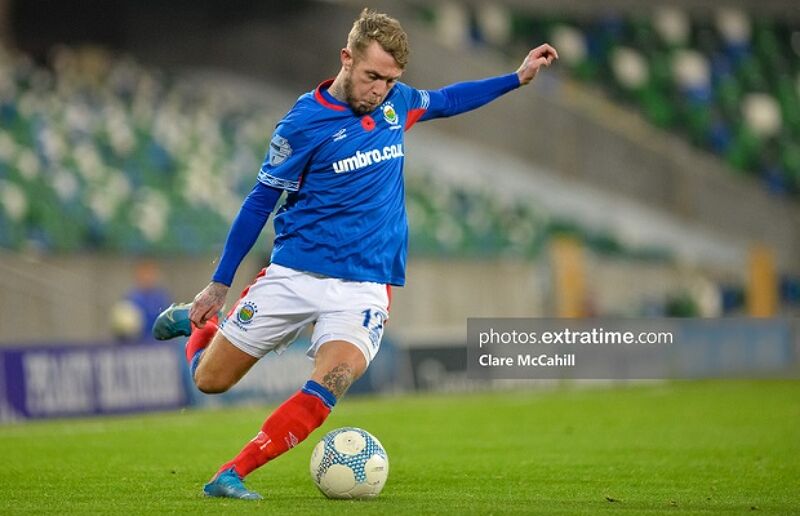 Linfield moved into pole position in the Northern Irish Premiership after they capitalised on Larne’s home defeat against Ballymena United.

Ballymena won by a goal to nil at Inver Park thanks to a second-half winner from Kofi Balmer.

The result saw United remain ahead of Cliftonville in the league table as Larne lost their first home game of the season.

And it was Linfield who were on hand to pounce on Larne’s defeat as they came from behind to win 2-1 away to Glenavon.

Daniel Purkis gave Glenavon – who handed Conan Byrne a start – a first-half lead before it was wiped out by two goals from Niall Quinn and Jordan Stewart in the second-half.

Cliftonville also came from behind to win in dramatic fashion away from home against relegation threatened Dungannon Swifts.

Aaron Donnelly’s own-goal gave the Swifts an unlikely lead in the 23rd minute but they were pegged back after just four minutes of the second-half by Chris Curran’s equaliser.

However, Cliftonville had to wait until the 90th minute to seal all three points as Ryan Curran scored from the spot for the Reds.

There was to be no dream debut for former Shelbourne central defender Daniel Byrne this afternoon as his Warrenpoint Town succumbed to a heavy 4-0 defeat away to Crusaders.

Byrne joined the Point earlier this week, but he was unable to help his side avoid defeat at Seaview.

Adam Lecky gave the Crues a first-half lead before Paul Heatley scored a ten-minute hat-trick for the hosts in the second-half.

Glentoran’s early burst saw them win at home to Portadown at the Oval. Former Sligo Rovers and Derry City defender Patrick McClean and Jay Donnelly both scored for the Glens early on.

However, they did have to survive a late Portadown surge towards the end of the game as Adam Salley scored what turned out to be a consolation in the 81st minute.

Elsewhere, Coleraine secured a comprehensive 3-0 win at home to Carrick Rangers. Ben Doherty, Stewart Nixon and Eoin Bradley all netted for the Bannsiders who won their third game on the spin.