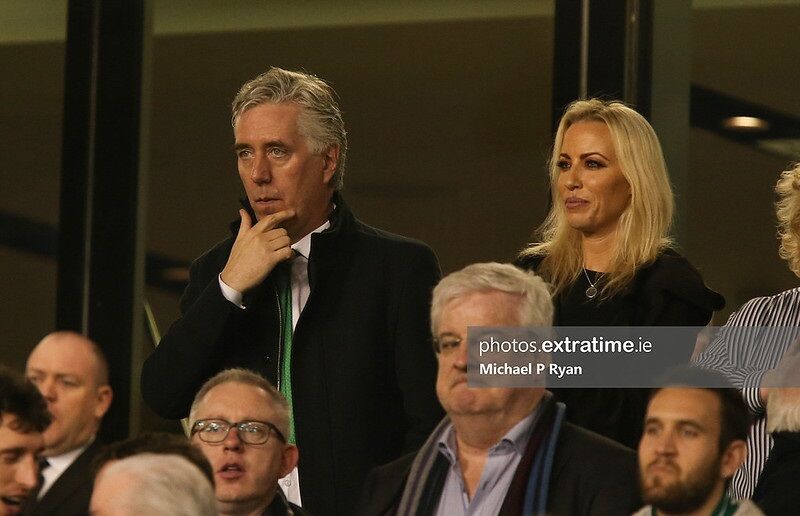 The FAI’s finances were presented in a grim light at the annual AGM on Tuesday afternoon as losses of more than €5 million for 2019 were outlined in full.

The suspension of Sport Ireland funding following probes into the association’s governance saw a €1.5 million drop in expected income on top of reduced gate receipts of €4.1 million.

FAI finance director Alex O’Connell also confirmed that the association is currently paying back €100,000 a month at a 5% interest to Mike Ashley’s Sports Direct.

This relates to a €6.5 million prepayment on a sponsorship deal for the FAI Summer Soccer Schools the company had an option to call back should it not be satisfied with the deal.

Including interest payments, the FAI is scheduled to pay back the last installment in October 2025 – further underlining the disastrous financial management under disgraced ex-CEO John Delaney.

O’Connell confirmed that €42 million in repayable bank loans has been restructured over 20 years but had to be declared as repayable within 12 months due to a “technical breach.”

Savings were made in terms of a settlement with Delaney, who accepted an offer of three months’ salary (€90,000) and a pension contribution of €372,000 as a severance payment.

This represents an effective saving of €2 million as the agreements in place with the former CEO could have entitled him to a total of €3 million.

O’Connell revealed that the FAI has not budgeted on the assumption of gate receipts in 2021 or on qualification for major tournaments in future years.

In association with auditors Grant Thornton, whom the members endorsed to continue in the role, the association made prudent projections for a return to a cash-positive position by 2023.

In response to a query from Derry City director, chairman Roy Barrett confirm that a protective writ has been issued against previous auditors Deloitte.

This writ precludes the association from commenting on any potential legal action against the firm for the time being.

O’Connell confirmed, in response to a question from the Amateur Football League’s Peter Connolly, that a Revenue Commissioners investigation has yet to be concluded.

The meeting concluded with a presentation from the new CEO Jonathan Hill, who continues to work remotely from his home in London due to the Covid-19 lockdown in the UK.

Hill affirmed his commitment to develop the League of Ireland and Women’s National League, pointing to his experience with the Scottish Premier League and Eredivisie re-launches.

He put engaging with current and new sponsors as a priority in a year when Three has pulled its deal with the national team and there is uncertainty around title sponsors for the national leagues.

Hill stressed the importance of gate receipts to League of Ireland clubs and confirmed a joint proposal with the IRFU and GAA has been submitted for the safe return of fans as early as March.