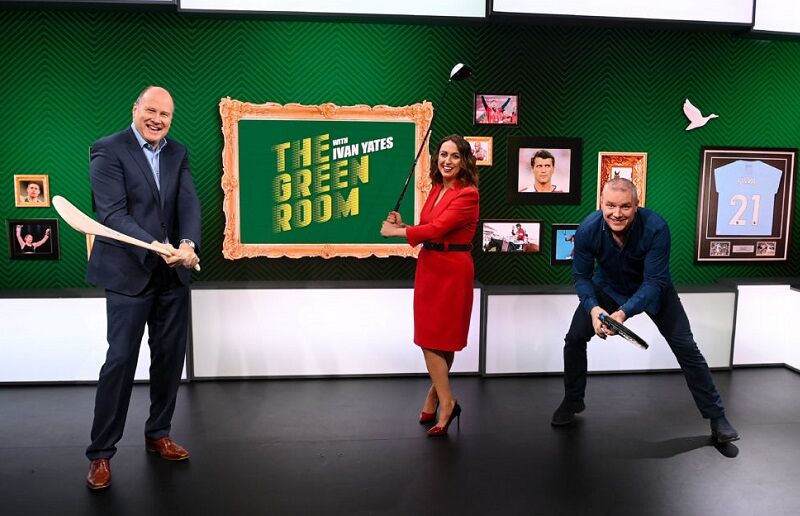 Centuries ago, the Chinese Zen masters posed what would become one of philosophy’s most profound questions: “what is the sound of one hand clapping?”

The answer, of course, is there is no correct answer: everything exists in relation to everything else, and altering that relationship, to however minor a degree, produces some material change.

As befits the times we live in, an even deeper question was posed on Wednesday night: “what is the sound of no hands clapping?” The answer is the Green Room with Ivan Yates.

The archetypal answer to a question that’s never been asked, the Green Room is simultaneously lowers the bar for Irish sports broadcasting and limbos under it with the expression of a dog seeking approval for licking itself.

Pitched by Virgin Media, with grammatical ambiguity, as “an entirely new creation, a live really fast paced show that will be completely different to the normal sports journalism,” the Green Room lives up to all counts.

As a thinly-veiled vehicle for the bookmaker Paddy Power, including the eponymous bettor as co-host, sets out with the twin aim of stripping both betting and sport from any vestige of seriousness.

Yates introduces the show as a light-hearted take on “the weird and wonderful world of sports” with the same level of bemused detachment as I’d speak about investment properties in Bulgaria.

The former TD’s previous involvement in sport is extensive – as the founder and owner of Celtic Bookmakers, at the business’s peak he had opened 47 betting shops in Ireland.

Celtic Bookmakers went into receivership in 2011 with debts of more than €7 million – making him a member of an exclusive club to have rigged a game and still come out on the losing side.

The business was liquidated in 2012, stiffing domestic suppliers for more than a million euro, and remains a cautionary tale for Celtic Tiger hubris.

Yates fled to Wales to plead bankruptcy, owing the state-owned bank AIB in excess of €5 million in personally-guaranteed loans (a confidential settlement was later made for a smaller sum).

The Wexford man, who has followed a well-worn path by retiring as a political anchor before returning to the airwaves with nary a beat missed, plays the role of a patsy as well as can be expected.

The late Bill O’Herlihy mastered the cod of a professional stooge, playing down his own extensive knowledge so that Eamon Dunphy, John Giles and Liam Brady could demonstrate theirs.

Yates lacks either the charisma or the empathy of O’Herlihy, and the show is pock-marked by his pub-stool outbursts about "OGS" and attempts to position himself as a sport-loving everyman.

In front of a live studio audience of cardboard cutouts – even the canned laughter carries an air of awkward pathos – Yates reels off his guests and co-contributors.

He introduces co-host Paddy Power and Niamh Kinsella who, as the only serious journalist involved, deftly describes the experience as “a career comedown.”

Power jokes that he was told he’d be the host (his name is plastered all over the shop – hilarious!) as does guest Robbie Keane for some reason.

The sight of Ireland’s greatest-ever striker reduced to poisonous forced banter is jarring but, affable character that he is, the Tallaght man makes the best of an uncomfortable position.

Keane is a genuinely engaging interviewee but he’s given little to work with as Yates cycles through his relationships with Barack Obama, Morrissey and Diego Maradona with unnecessary speed.

Yates, Kinsella and Power recount their favourite sports stories of the year, none of which seem particularly interesting.

Yates gets great yardage from a boring story about Eric Dier leaving a game to go to the toilet, Kinsella the Colleen Rooney-Rebekah Vardy saga and Power some bland shit about golf.

Impressionist Conor Moore interjects with a genuinely funny sketch where he impersonates the likes of Jurgen Klopp, Frank Lampard and Jose Mourinho with uncanny accuracy.

It’s about as good as it gets: Yates moves onto a joke about Keane’s famous cartwheels and finger-gun celebration.

If Dealz released their own brand banter... pic.twitter.com/yMxAVBCIjF

"After the cartwheels, you started doing this finger guns thing – is that from your youth in Tallaght with real guns?”

Keane retorts in his best Charlie Nicholas tone: “A little birdie told me that you used to do it at the farm in Wexford with the cows.”

At this point, Yates brings a close to the first half: “Put on the kettle and we'll see you after the break for the second half.”

Yeah, see you there pal.