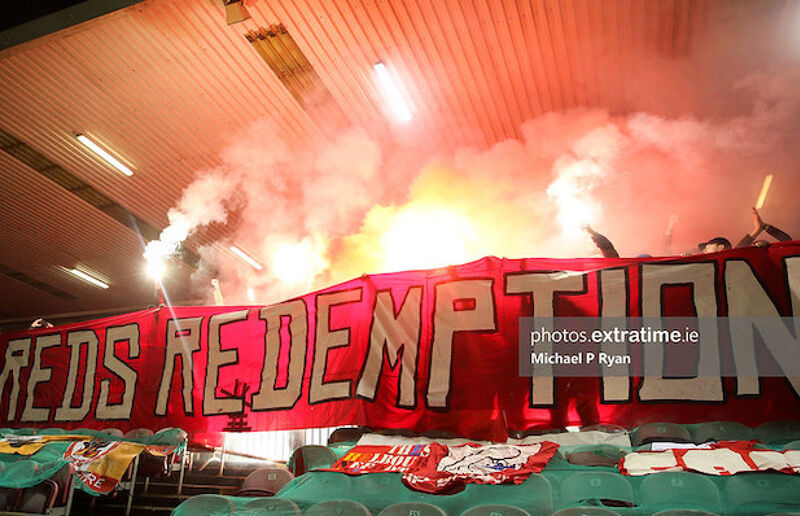 Most of us will be glad to see the back of 2020 but before we joyously turn the calendar over to 2021, we’ve had a look back over the articles we published here at extratime.com from the last 12 months to bring you the list of what were the most read.

Even with the League of Ireland season cut in half, European ties reduced to single legs and no attendance articles for us to write about since March we are pretty pleased here in extratime towers with what we were able to bring to you in 2020.

When the league shut down in March, we like many sports media outlets delved into some nostalgia.

We cranked up the extratimemachine to do match updates on some classic games but it also gave us the chance to give some more space to interviews such as this one with former League of Ireland and MLS player John Dineen who is now coaching with the University of Delaware – go the Fightin’ Blue Hens!

19. The English Premier League is back on Saturday - who should League of Ireland fans support? (Dave Donnelly)

Every now and then, we let Dave Donnelly loose to go into full wind-up-mode and he came up some crackers this season including this one from September with the return of one of one of Europe’s youngest leagues:

The ‘Premier League’ was created as recently as 1992 in order to allow England’s top professionals to face each other on a regular basis.

It doesn’t have the history of the League of Ireland, which was created in 1921, but the fledgling ‘Premier League’ has steadily grown despite a weak domestic economy and non-membership of the European Union.

The ‘Premier League’ kicks off this weekend and what better time for Irish football fans to familiarise themselves with the clubs? Who knows, you might even fall in love with one!

Back in April, in the week when the new Republic of Ireland manager took over the reins, Tom O’Connor took a bit of a deep dive into the goalkeepers that Stephen Kenny has used during his managerial career and what that might tell us about who might be his number 1.

17. Gary Shaw: 'I signed straight away and going home, I checked on Teletext to see where Bray were in the league and they were bottom - I didn't care' (Dan Lucey)

A regular fixture in our annual Top 20 articles article are interviews that Dan Lucey does for the site where he chats with a player about their career away from just discussing the latest set of results.

In this article, Dan spoke with Gary Shaw about his time in the League of Ireland where he has had two spells at Bray, played with Longford Town, Shamrock Rovers and St. Patrick’s Athletic.

16. Frustration grows among WNL clubs with no fixture list on horizon as FAI mull over Bohemians application (Dave Donnelly)

This article from mid-February centred around the frustration around no fixture list being available for the start of the WNL due to start on 15 March.

We didn’t know it then but by the time that date came around all football in the country was on hold and wouldn’t return frustratingly for several months.

With no live games to cover in June, we resorted to covering local authority council meetings to try and bring you some stories from the League of Ireland.

This article confirmed that South Dublin County Council was about to commence the Part 8 planning process for a new 2,500 north stand in Tallaght Stadium – to bring the capacity of Shamrock Rovers’s home venue up to above 10,000 capacity.

14. Ireland under-21 Danny Grant confirms he is to leave Bohemians (Andrew Dempsey)

Bohemians finished runners-up in the 2020 Premier Division – their best finish for a decade – helped in no small part by the impressive Danny Grant.

A firm fan favourite in Dalymount Park, the winger confirmed his departure from the club at the end of the season – subsequently signing for Huddersfield Town.

13. 'He is already instilling a real belief in each of us' - Darren Randolph reacts following Stephen Kenny's first training session (Brendan Graham)

There were a mixture of zoom and in-person events during the year with Stephen Kenny and his international squad.

Ahead of Kenny’s first game in charge, Brendan Graham took the extratime-e-bike to FAI HQ to hear from Ireland ‘keeper Darren Randolph after the very first training session of the Kenny era.

Unsurprisingly since he had never managed a senior men’s team Filippo Giovagnoli didn’t make our list of potential candidates but the Italian’s success getting his side to the Europa League group stages and winning the FAI Cup has earned him the permanent job for 2021.

“Are you not entertained? Is this not why you are here?” were the questions that were asked during the early lockdown as people searched through Netflix and YouTube for their football content. Dylan O’Connell helped out by directing you to his top ten Irish football documentaries.

We had Copa 90 at the Dublin Derby in Dalymount Park, Kerr’s Kids and the Rod Squad amongst the list.

Watch out for the Top 10 list coming later in the week.