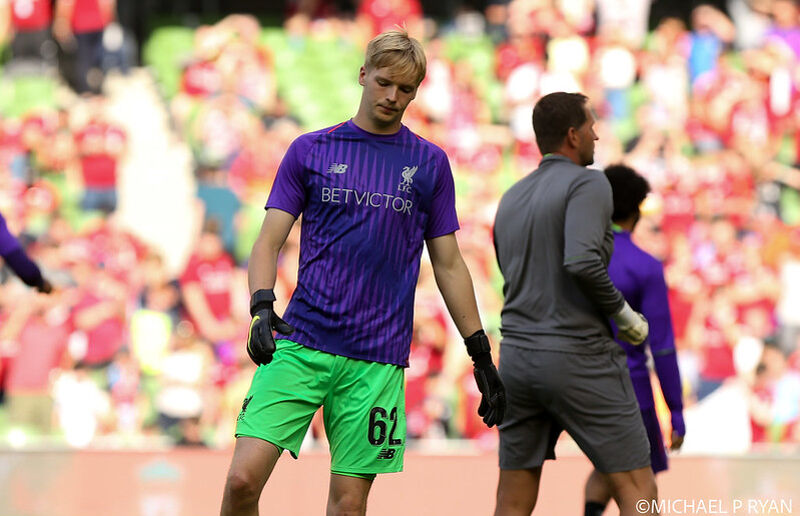 Kelleher was preferred to the experience Adrián and kept a clean sheet as Liverpool beat Ajax to qualify as group winners. Credit: Michael P Ryan (ETPhotos)

Jurgen Klopp says Ireland’s Caoimhín Kelleher is ready to be Liverpool’s second-choice goalkeeper after convincing in the Champions League win over Ajax on Wednesday night.

The Corkman is set to make his Premier League debut against Wolves on Sunday as first-choice Alisson Becker continues his recovery from a hamstring injury.

Spanish goalkeeper Adrián was preferred to Kelleher when Alisson missed the tail end of last season with injury, and again when he suffered a setback earlier this season.

Klopp opted to favour 22-year-old over the experienced Adrián at Anfield and he pulled off a string of important saves as the Reds ran out 1-0 winners to seal a last 16 spot as group winners.

In doing so, he became the first Irish goalkeeper to keep a clean sheet in the Champions League proper, and the first Irishman to appear since Eoghan O'Connell for Celtic in 2016.

“He looked good but he’s a really calm person and he will not be now flying the whole of the week,” Klopp said at his weekly press briefing.

“He is a hard worker and there’s no doubt that he will deal with all the fuss around him really well. It was a big call to throw him into that game but thank God, it worked out.

“Caoimhín did well. So, there are not a lot of reasons I could mention in this moment to say he will not start against Wolves, but there is training in between and other things.

“He has to stay fit. We have sessions. All this kind of stuff. But he has done enough to convince me, but he did that already months and years ago.

Klopp answered in the affirmative when asked if Kelleher has done enough to establish himself as Alisson’s deputy, though he was careful not to discount Adrián.

“Yes, he has [done enough] but in life you have to prove things. That’s unfortunately like this. Caoimhín is a sensationally talented goalie. And for goalies it’s really difficult, goalies have to wait.

“They can be exceptional but they have to wait for their chance because there’s only one goalie on the pitch and if this goalie plays for 10 years in a row, it’s pretty difficult.

“You can be still a wonderful goalie and nobody will see. Now he got the chance and I think he convinced everybody.

“He didn’t have to convince us, obviously – we thought it will be like this. But he convinced everybody, that’s good.

“But Adrian doesn’t deserve just to be written off now, there’s no reason for that. He supported Caoimhín in an exceptional way.