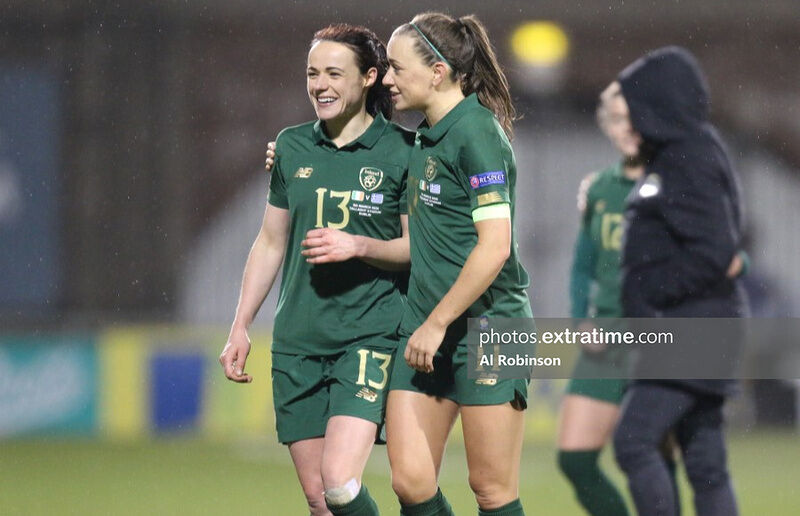 The task is achingly simple for the Republic of Ireland on Tuesday night: nothing but a first-ever victory over World #2 Germany will keep their Euro 2022 dreams alive (kick-off 5pm).

As if the task wasn’t daunting enough, Vera Pauw has been hit by the late withdrawal of Leanne Kiernan and Megan Campbell with injuries sustained in camp.

Defender Campbell returned to Manchester City after picking up a knock, while a hamstring issue has forced Kiernan out as a precaution.

With regular starter Megan Connolly also missing with injury, it will take a monumental effort for Ireland to resurrect their campaign after last month’s defeat in Ukraine.

Even a second-placed finish will only be enough to earn a play-off against another of the runners-up, but Ireland are confident they can produce their biggest-ever upset.

“If we beat the Germans, we get a play-off and anything less than that, we're out,” captain Katie McCabe told the media last week.

“I think that's motivation in itself for each and every one of the girls. For me as a captain, I'll obviously be doing everything I can on the pitch and leading by example on the pitch.

“But we're all prepared and we're all ready for that. It's going to be a really good build-up to the game.

“I'm actually looking forward to the stretch of time that we have together on the pitch because, the previous two camps, we've only had a day or two here and there due to Covid situations.

“I'm actually excited to be in for the week, to work on things that we haven't had time to work on previously.

“I'm really looking forward to it. The game is motivational in itself and I'm very confident that the girls will be ready for it.”

Germany have already qualified for the finals with seven wins from their seven games, scoring 43 times and conceding none, but that doesn’t mean they will slack off.

The Germans’ defeat to Iceland in 2017, in qualifying for the 2019 World Cup, is the only time they’ve been beaten in a qualifying match for 22 years.

Some rotation is expected – Germany coach Martina Voss-Tecklenburg has already confirmed Ann-Katrin Berger will get her first cap in goal – but there will be little dilution of quality.

"We want to end this year 2020 with an outstanding European Championship qualification. I think that we will meet a more offensive opponent," said Voss-Tecklenburg.

Germany have no injury doubts at the time of writing.

The Republic of Ireland and Germany have met five times to date and, so far, it’s five wins from five for the Germans.

Germany ran out 3-0 winners when the sides met in Essen in September, thanks to first-half goals from Marina Hegering, Dzsenifer Maroszan and Lea Schuller.

The closest Ireland have come to taking a result from the Germans was in qualifying for the 2015 World Cup, when Germany ran out 3-2 winners in Tallaght.

Louise Quinn headed Ireland in front earlier and led into the final quarter when goals from Simone Laudehr and Lena Lotzen turned the tie on its head.

Stephanie Roche looked to have rescued a point for Ireland with a goal one minute before the end of normal time but Melanie Leupolz popped up with an even later winner.