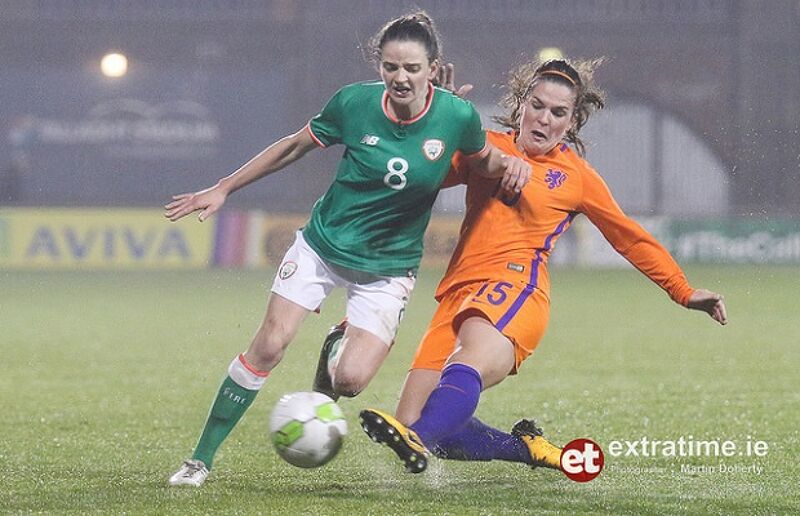 Leanne Kiernan is tackled by Siri Worm of the Netherlands during a World Cup qualifier in Tallaght in April 2018. Credit: Martin Doherty (ETPhotos)

Ireland have been dealt two significant blows ahead of their must-win Euro 2022 qualifier with Germany as Manchester City full-back Megan Campbell and West Ham United striker Leanne Kiernan have been ruled out with injury.

Luckless Campbell was ruled out last week with a knock as she continues her recovery from ankle surgery in February, while Kiernan picked up a hamstring injury in training.

Campbell returned to City after picking up the knock on the training ground, though there is good cover in place as Harriet Scott was given leave to join up late after completing university work.

Kiernan picked up a hamstring injury over the weekend and returned to London on Saturday as manager Vera Pauw opted not to risk turning a niggle into a long-term issue.

“We have now confirmed Leanne Kiernan had to leave the camp with a niggle in her hamstring.,” Pauw told the media on Sunday.

“It’s not yet a big injury. But we are sure if we played her, we could destroy her career because it could rupture and scar her hamstring for the rest of her career.

“And I’m not the kind of coach who wishes to take those kinds of risks with her players. I see myself to help the players to go above their level but not use and abuse players for my own good.

“The risk is far too big, even in a game like this and I don’t want to threaten her career. Even if it were a World Cup final, I would not have played her.”

Campbell’s injury woes have seen her involved limited in recent years, and her most recent appearance was the 3-2 win over Ukraine in Tallaght last October.

The full-back’s long throws were a huge source of difficulty for the Germans the last time they played in Ireland, when they only secured a 3-2 win with a last-minute Melanie Leopolz strike.

Captain Katie McCabe underlined her former Raheny United teammate’s importance to the side when the squad first met last week.

“Having Megan back is fantastic for us. What she can do on the pitch is unbelievable, and her presence off the pitch as well. She's so important to the team.

“It's been a whole year since the last Ukraine game. That game in itself showed how important she was. Het throw-in alone is unbelievable, that's a weapon in itself.

“For us, we're just delighted to have her back in. Obviously she's had a few injury issues over the course of the years.

“Obviously the physio team and staff will be making sure to get her 100% right. Whether she can start or not, I'm not too sure but hopefully she can get some minutes.”