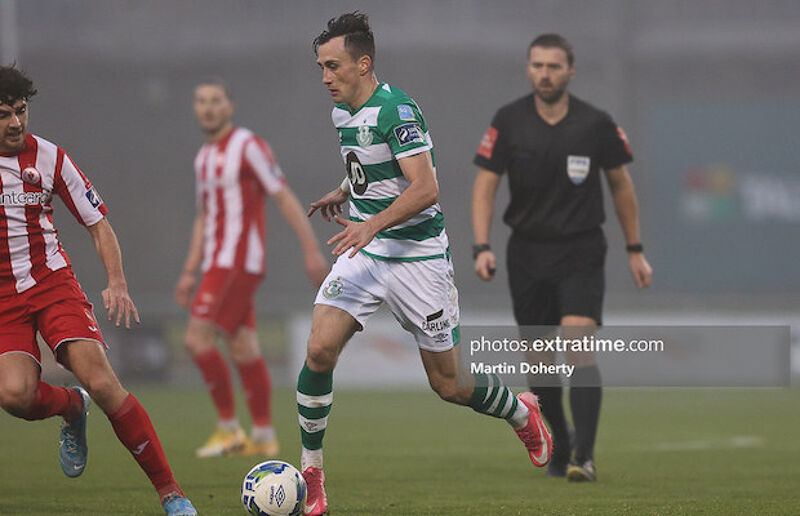 Having missed one and then scored two penalties in Shamrock Rovers’ FAI Cup quarter-final last Sunday, the Derryman got another two goals for the Hoops in Sunday’s semi-final win over Sligo Rovers.

With Dundalk’s 11-0 demolition of Athlone Town in the other semi-final, it sets up a mouth watering repeat of last year’s cup final. In that 2019 fixture a late McEneff penalty seemed to have secured the cup for Rovers only for Dundalk to take the game to extra-time and penalties before the Hoops prevailed.

“It has been a brilliant year so far for the club although the fans have missed out not being here,” said McEneff speaking after the 2-0 victory over Sligo Rovers. “We want to achieve something special next Sunday. With no fans being there it will be different.”

Hoops supporters gave their team a sending off on Saturday at training ahead of the semi-final as the club sets their sights on a league and cup double. “It was brilliant – there were a good few socially distanced flares around the whole pitch. I wasn’t expecting it.

“The fans are brilliant here. We know they aren’t in the stadium but we have had enough messages from fans. Well done and congrats messages and they love the club and rightly so. All we can do is put a shift in every day and put in the performances on the pitch.”

McEneff got the Hoops going after just four minutes with a neat touch and finish, controlling Rhys Marshall’s headed flick from a Jack Byrne corner. “It was massive to start the game well. Sligo had a long game the other night over 120 minutes so we wanted to start well and come out of the blocks.

“We did that and got the early goal maybe too early as we sat off which is natural and Sligo got back into the game. The second goal before half time was massive and we had a very professional performance in the second half.

“We started the game with one aim – get to the cup final. We have gone out and done a professional job and achieved that.”

In the quarter-final last week, Rovers were 2-0 down before getting three penalty kicks in five minutes. McEneff missed the first but was keen to take the next spotkick that came his way.

“I kicked the ground for the first one and the ‘keeper saved what was an awful penalty. Got my second one and I’d never been as nervous but I had to go and grab the ball as it felt right. It has been a good few weeks for myself personally,” said McEneff who has seven goals across all competitions this year.