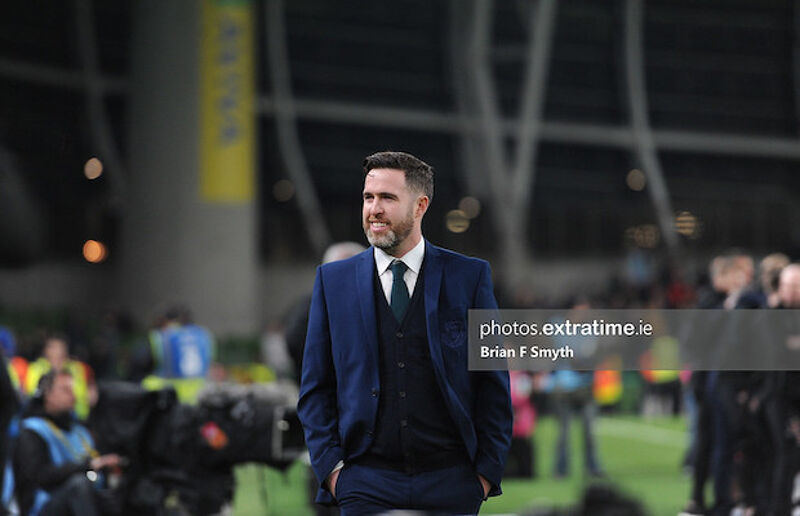 There will be no shortage of motivation for Stephen Bradley’s Shamrock Rovers side when they play in next Sunday’s FAI Cup Final.

There is the history that his team can make by winning a double without losing a game in the league and cup this season and desire to win their first double since the last days of Milltown for the club’s supporters – some of whom welcomed Rovers to training on the eve of their semi-final 2-0 win over Sligo with a social distanced fan display.

The Hoops are looking to retain the FAI Cup – a cup that the club had a 32 year gap between winning and they want to go through the domestic season unbeaten while winning a double – something that has only ever been done once before in League of Ireland history.

“We know we have a chance to do an undefeated double which I’m informed hasn’t been done since 1925,” said Stephen Bradley after the semi-final victory speaking about his aim of equalling the Shamrock Rovers double winning side from the 1924/25 season.

“There is motivation for us to create our own bit of history as doubles don’t come around too often. 1987 was the last one for this club.”

On Saturday some Shamrock Rovers supporters had gathered around the perimeter of their club’s training pitch in Roadstone to give their team a send off ahead of the cup final.

“It was brilliant. It was a great surprise when we walked up onto the pitch. The fans were spread out around the pitch with flags and flares. It was fantastic. It gave us a real boost.

“It made us aware that they are still with us. They can’t be here today or next Sunday and that is the biggest disappointment. They are still there with us, kicking every ball and watching every game and you can’t forget that.

“We are playing for them and looking to go and win a double for them. We have lost some life long fans along the way this season. When you are in this bubble and playing in empty stadiums maybe you can lose sight that there are thousands of fans out there who are rooting for you. It was nice to get that reminder.”

Bradley had to content in the match against Sligo Rovers with the late withdrawal of Pico Lopes from his squad due a COVID-19 issue.

The HSE informed Lopes on Saturday evening that on a flight from his recent African Cup of Nations trip with Cape Verde, there had been a contact on the plane who was coronavirus positive.

Lopes was going to start in the team but he had to sit the game out but he will be available for next Sunday’s cup final and Bradley hopes that Aaron Greene will recover from a knock to make the match day squad too.

“At the last minute yesterday, Pico was ruled out as he had to quarantine after someone on his plane two weeks ago was positive. He will be back next week as the quarantine is over now.”

In Sunday’s semi-final win Aaron McEneff scored both Rovers goals, to add to the two penalties he scored in last weekend’s quarter-final win over Finn Harps.

“Aaron is the best all round midfielder in the country. He does everything, he attacks, defends, scores goals and creates goals. He is work rate is unbelievable.

“Yesterday, he was out for half an hour after training practicing his left foot shooting and he scores today with his left. That shows his mind set and he deserves all the plaudits that he gets.”