An alternative First Division - how would it have panned out if the FDA got their wish to exclude Shamrock Rovers II? 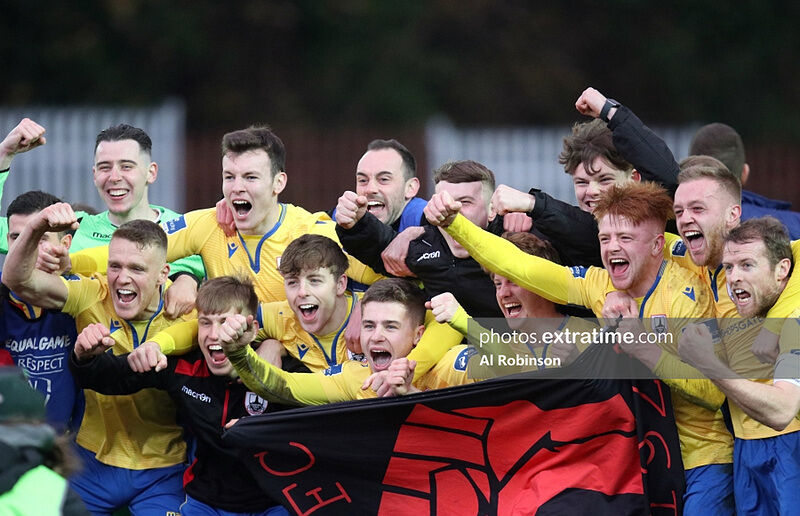 The 2020 First Division was the most exciting in recent memory, with seven of ten teams in contention for promotion right up until the final regular-season whistle on October 27th.

In the end, Drogheda United were crowned champions on the final day thanks to their 1-0 win over Cabinteely at Stradbrook Park.

Bray Wanderers, who had swapped top spot with Drogs and Longford Town several times in the final weeks, kept up their end with a final-day win in Athlone but fell just short.

Cabo and Cobh Ramblers missed out on the four-team play-offs, which were contested by Bray, UCD, Longford and Galway United.

But what was most remarkable about the 2020 season is that it almost didn’t happen at all – the First Division clubs only eventually agreed to go ahead following much negotiation with the FAI.

Their bone of contention was the admission of entryists Shamrock Rovers II to the league following Limerick’s withdrawal at the end of 2019 – leaving a vacancy for the tenth team in the division.

An alliance of First Division clubs, imaginatively titled the First Division Alliance, opposed Rovers II’s admission on the grounds that it would undermine the ‘sporting integrity’ of the league.

Here’s how the table looked following the 18 games of the regular season:


Following wins over UCD and Galway, Longford saw off Premier Division Shelbourne in the final to gain promotion to the top level for the first time in four years.

As it happened, Rovers gathered 15 points from their 18 games, finishing eighth of the ten teams, and the sporting integrity of the league was at least maintained.

But, had the First Division Alliance got their way, could it all have turned out so different? And might one of those nine clubs count it as a blessing they didn’t get their way?

The first thing I was taught studying history in college was never to engage in counterfactuals (actually, the first thing was to forget everything we’d learnt about Irish history in secondary school).

But the only thing we at Extratime.com love more than what happens in our league than what didn’t happen – there’s no bread quite as tasty as uneaten bread.

Rovers, along with Wexford and Athlone Town, comprised a trio of sides a long way adrift of the seven clubs competing for promotion.

It’s a small number so if Rovers II were retroactively removed from the league, and any points gained from them stricken from the record, logic suggests it would make little difference.

Draws with Drogheda United, Galway United and, on the crucial final day, Cobh Ramblers would be effectively null and void.

We know that failing to beat Rovers at home cost Cobh a place in the play-offs as Galway’s 2-2 draw and Cabinteely’s defeat to Drogheda left the final play-off spot up for grabs.

Had Cobh managed a winner on the final day, they, instead of Galway, would have faced Bray Wanderers at the Carlisle Grounds.

That didn’t happen, though, so what we have to look at is what would have transpired had Rovers never been in the league in the first place and everything else stayed the same.

First, the good news. In our alternate reality, the legal wrangling between Cabinteely and Wexford would be meaningless as Cabo’s expunged wins over Rovers would leave them outside the play-offs.

With 20 points, Cabo would be three points behind the sixth-placed team and comfortably out of contention for the play-off berth.

Drogheda would still be league champions and, their draw with Rovers II at the start of the season discounted, they’d have needed to lose to Cabo by eight goals on the last day to surrender the title.

The play-off spots look roughly the same as they eventually transpired. Galway and Cobh are still neck and neck, with only goal difference separating them.

Both having won one and drawn one with Rovers II, they’d each drop from 27 points to 23, and Galway’s goal difference superiority would remain at five goals.

Longford, though, beat Rovers II twice so they’d also drop from 29 points to 23 – and this is where things get interesting.

Losing three goals from their two victories over Rovers, the midlanders would see their goals surplus drop from +3 to 0.

With Galway boasting a positive goal difference of +6 and Cobh on +1, it’s Longford who would miss out on their place in the play-offs – and thus their promotion win over Shelbourne.

On New Year’s Eve 2019, Longford were one of nine signatories to the FDA statement that stated Rovers II would set a "dangerous precedent […] further demeaning its existence as a second-tier football league in Ireland.”

What a difference a year makes.