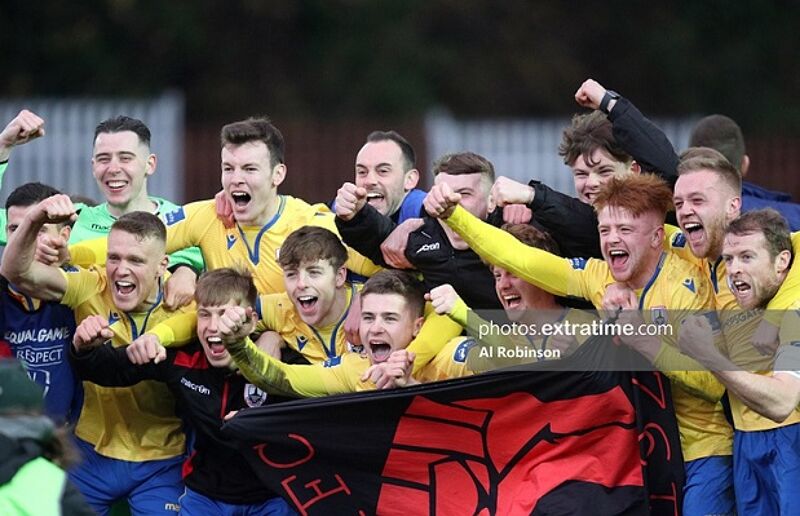 He may not get the same amount of limelight that his brother Rob gets, but Joe Manley was one of the key men involved in Daire Doyle’s ultimately successful promotion charge.

The Longford Town defence struggled at times during the 2020 campaign, but Manley was one of the constants who impressed throughout.

The Dubliner flourished in a three-man Town defence alongside Joe Gorman and Mick McDonnell in the play-offs, and he will relishing his top-flight bow in 2021.

Dervin rose to prominence during the play-off games against UCD, Galway United and Shelbourne.

The 21-year-old made 20 appearances for the Red and Black and scored twice – with goals against Shamrock Rovers II on the opening night of the season and the second during the play-off win over Galway.

Dervin’s engine and desire in midfield was a key reason in Longford’s eventual promotion – and should he remain at the club for 2021, he will more than likely play an even bigger role next season.

In truth, there is probably an argument for Rob Manley to be in the star player category as well as the best new signing one.

Manley of course scored the goal that got Longford promoted to the top-flight, but that was not his sole impact of the year.

His tireless work ethic proved pivotal, as did his 11 goals throughout the season.

He ended Longford’s promotion hunt last season, and he got them promoted this year with his winner versus Shelbourne.

As far as new signings go, you will do well to find one who has had more of an impact in just one year.

What we expected they would do: 2nd

The extratime.com team predicted a second placed league finish for Longford Town. Were we right? Not quite, but it doesn’t matter a whole pile.

They never do it the easy way, but Longford Town have been promoted to the Premier Division after a four-year absence.

They achieved promotion via the play-offs with a win over Shelbourne, but they did struggle at times during the league campaign.

They of course did have some impressive wins along the way, with victories over UCD (home), Cabinteely (away), Galway United (away) and Drogheda United (away) setting them on their way.

However, there were a number of disappointing defeats, with heavy defeats at home to both Cabinteely and Galway United proving to be a sobering reminder of the task they faced to achieve promotion.

But those defeats matter little at this stage as they managed to right the wrongs of their league form in the play-offs with three wins on the spin to secure promotion.

They did of course finish fourth in the league season – and they will probably be left pondering what may have been had they had more consistent league form in terms of a title charge – but as I said already, that doesn’t matter now…

It was FAI Cup heartbreak for Longford Town as they lost to ten-man Cork City at Turners Cross in the first-round of tournament.

But fast forward three months later, Cork have since been relegated and Longford have been promoted to the top-flight.

Make no mistake about it, Longford Town face an almighty task in the 2021 Premier Division following promotion.

Like last year, Daire Doyle’s Red and Black will need to keep the nucleus of their side together – and that is a bare minimum.

Young players such as Aaron McNally, Aaron McCabe and Callum Warfield may also see further opportunities present itself to them next year.

McNally in particular may be one to watch, especially after his recent showings in the play-off games.

But overall, Longford Town will need to strengthen in areas where they are lacking depth in and experience.

Top-flight survival know-how may be required in case Longford become embroiled in a relegation battle.

However, should Longford strengthen in areas that they need to, they will be more than competitive in next year’s Premier Division.

The Red and Black have been promoted to the top-flight twice before and in their first year up each time, they have stayed up on each occasion.

Past trends look good for Longford – but they will not be blinded by that optimism either.

Either way, De Town can look forward to a long-awaited return to the Premier Division after four years away.