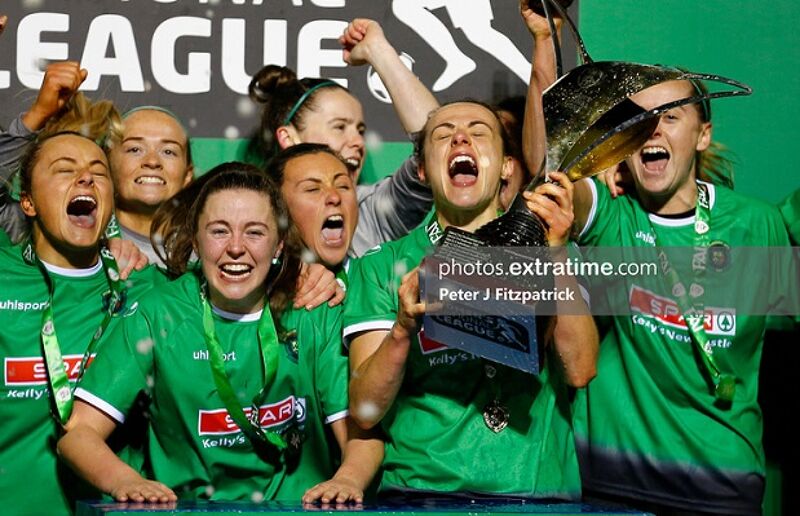 A second half masterclass from captain Aine O'Gorman steered Peamount United to a 3-1 win over Shelbourne this evening, with the result crucially securing the Peas the 2020 league title.

O'Gorman scored twice in the final 20 minutes, while Karen Duggan was also on target, as the Peas denied Shelbourne a first title in four years.

Emily Whelan had given Shelbourne the lead early in the second half but they couldn't hold on for what would have been a famous victory.

Lively striker Whelan had the first real chance of the game early on finding herself one on one with Niamh Reid-Burke in the Peamount goal.

Reid-Burke did brilliantly well to save at full stretch to deny the striker the opening goal of the game.

Izzy Atkinson was next to test the agility of Reid-Burke minutes later. Her free kick just outside the box beat everyone on its way to goal but Reid-Burke watched it all the way and saved easily in the end.

As the first half progressed Peamount were growing slowly but surely into the game. Claire Walsh was teed up nicely for a shot from distance by Eleanor Ryan -Doyle. Walsh got good power behind her shot, but it drifted narrowly wide of the post.

Aine O'Gorman was causing problems down the right with her pace and determination on the ball. A neat one-two with Stephanie Roche left O’Gorman with a whipped ball right into the mix in the box.

A double effort, firstly from Karen Duggan and then by Eleanor Ryan-Doyle, saw Peamount go close but Pearl Slattery got herself right into the path of Ryan Doyle’s shot to clear the danger.

Ryan Doyle went close again on the stroke of half time after getting on the end of a fantastic cross field ball to her feet from Roch, but Ciara Grant pulled off a superb last ditch tackle to keep Peamount at bay.

A blistering start from Shelbourne in the second half saw them take the lead inside the opening 60 seconds of the restart through the lively Whelan.

The striker did fantastically well with her first touch taking the ball past Walsh before blasting her effort into the top corner.

Despite having to defend quite a lot in their own half, Shels looked comfortable throughout and were solid in defence until Aine O'Gorman decided otherwise.

O'Gorman sent a rocket of a free kick up and over the wall and into the top corner of the net to level the game and ensure a grandstand finish going into the final twenty minutes.

Peamount's goal from their captain injected a real dose of confidence into each and every one of their players.  And they would take the lead just minutes after they had got themselves back on level terms.

Megan Smyth-Lynch’s corner right into the middle of the box was met by the experienced Duggan, who saw her header fly past Rachael Kelly in the Shelbourne goal.

Once they got their noses in front, Peamount looked comfortable as they approached the home stretch and looked to seal a second consecutive league title.

O’Gorman made sure of proceedings with five minutes remaining nicking the ball past Kelly at the back post from a corner to extend their cushion to two.

A real captain’s performance on the night ensured O'Gorman and her Peamount teammates are deservedly crowned champions for 2020 and for the second year running.