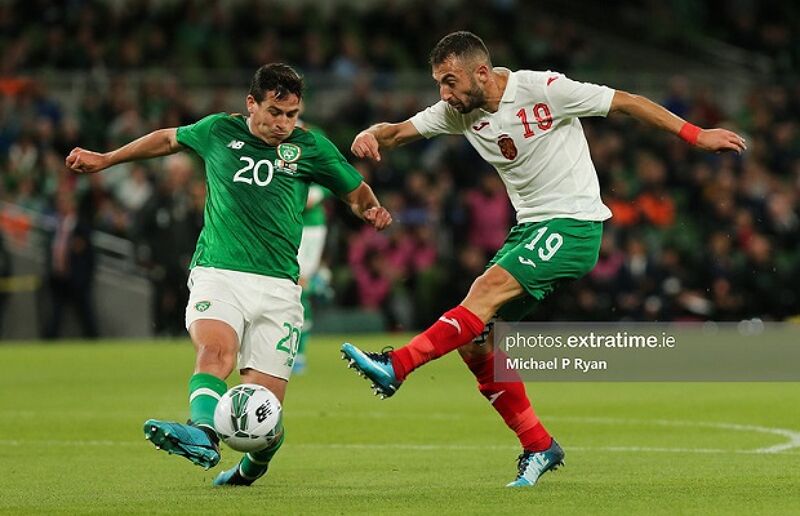 Another day and another frustrating result for Stephen Kenny, who will now have to wait until 2021 to find his first win as Ireland manager.

The Boys in Green at least secured their League B status with the point they needed but just one goal in six games will concern the former Dundalk boss.

Here’s how the players rated:

After a couple of shaky outings recently, the West Ham United keeper will have been grateful for a quiet night in terms of shot-stopping.

Was only once drawn into a save, when a Jason Knight mistake allowed Dimitar Iliev a chance to strike on goal but Kevin Long’s deflection made it an easy save for the Bray man.

Had one shaky moment in the second half as he looked to have played himself into trouble under pressure from Iliev, but he worked his way out and his distribution was generally good.

Showing signs game on game that he is more than comfortable at this level and was given an opportunity to show his attacking attributes from right back.

Created three chances for James Collins, including two in the opening minutes of the second half, and got up and down his flank well.

One poor defensive header gifted Ivanov a chance after the break but he was solid in the air and linked up well with Daryl Horgan and, later, Knight on the right.

Another mixed night for the captain who showed the best of his attributes with some desperate last-ditch blocks but was also loose in possession.

One poor defensive pass early on presented Aleksandar Tsvetkov with a chance to shoot and was grateful to Long for snuffing out the danger.

Did just about enough to put off Kristian Dimitrov when the defender looked certain to give Bulgaria the lead, but his limitations in possession was matched with a reluctance to carry the ball forward.

Long was the more comfortable of the two centre-halves in possession but still appears uncomfortable at times with the passing from the back required by Kenny.

Did try and break the lines with forward passes but was often too conservative and turned back to Duffy or Ryan Manning when there was space to exploit.

Showed up well in defence and anticipated danger well when Bulgaria broke, and will be confident he can push for a first-team spot next year.

A difficult debut for the Swansea City man who has always looked more comfortable in the attacking wing-back role than full-back.

Was very fortunate only to see yellow for a reckless tackle on Spas Delev in the first half and looked unsure on the ball at times.

His lack of top-end pace may limit his opportunities at full-back but he got up and down the line well and never shirked responsibility.

Has been entrusted with the deep-lying midfield role on a number of occasions under Kenny but hasn’t convinced as a screen for his defence.

Too often found up the pitch when his defenders needed an option for a pass and Knight was forced to cover, though he ironed out the sloppy passing of past games.

One good cross from the left almost set up Collins for a close-range chance but was thwarted by a slight touch from Dimitrev, but otherwise offered little creatively.

Stephen Kenny is a big fan of the Derby County teenager and this window looks to have cemented him as an option for the senior squad.

Struggled in the first half and had a number of heavy touches, while his short pass gifted Iliev the Bulgarians’ only shot on target.

Looked more dangerous when moved to the right wing for the final quarter and his immediate international future may come as an inward-looking wideman.

Injuries and loss of form have limited Brady’s appearances for Ireland since 2016 but he looked back to somewhere approaching his best against Bulgaria.

He’s lost a yard of pace, which may see him spend more time centrally than out wide for Ireland, but his class on the ball and experience helped out the green Knight.

Found more space when Cullen was introduced and produced a chance from nothing in the second half where only the bar stood between him and a spectacular opener.

Another strong first-half showing from the Wycombe Wanderers winger who, having feared for his international future, now looks set to be a regular in the side.

His close control and trickery caused the Bulgarian defence problems and Collins should have scored from his perfectly-measured first-half cross.

Faded in the second half, as he did against England and Wales, but with more gametime domestically he may establish himself as a first-choice in Kenny’s side.

Played noticeably more narrowly than Kenny’s wingers have tended to do and was almost a second striker at times.

Got into the box regularly and linked up with Collins in close quarters but will have nightmares about the fluffed second-half chance after being set up by Knight.

Equipped himself well in his second international start, his first having been a goal-scoring one in the friendly between these sides last September.

Had three good chances to break the deadlock and should have scored at least one of them, but offered more as a hold-up man than Adam Idah and brought his wingers into the game.

Forgotten man Cullen changed the game in Ireland’s favour when he was introduced for Horgan for the final quarter as he began to dictate the tempo from deep.

His quick free kick directly to Brady’s shot that hit the bar and offered the sort of energy and efficiency in possession that had been lacking for the first 67 minutes.

Just 12 minutes to impress for the Shamrock Rovers playmaker following an injury to Brady and he showed well in his short time on the pitch.

Caught in possession a couple of times but his passing was crisper than it was in his Wales cameo and offered Bulgaria a challenge they hadn’t face thusfar.

Came on for the final five minutes and didn’t have much time to impress but linked up well with fellow sub Troy Parrott.

Showed some neat touches during his five minutes but was too eager to stray offside when played in late on by Knight.

Introduced for the injured Manning for the closing stages and was a mixed bag, losing possession in his own half a couple of times but getting forward well to help out in attack.

Too slow to change things up when it was clear things had stagnated after the break, and only gave three of his subs five minutes following an injury to Manning.