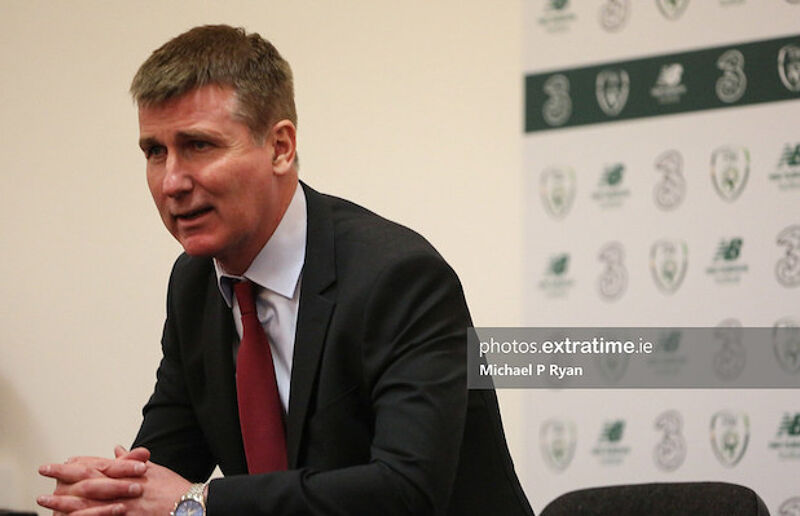 It was another loss for Stephen Kenny on Sunday evening as the Republic of Ireland boss is still seeking his first win as manager after six matches.

Kenny can feel hard done by with the 1-0 defeat to Wales in Cardiff as Ireland had the better chances in the game.

However it is the third loss by that scoreline in this UEFA Nations League campaign – having lost home and away to Finland – and Ireland face a relegation decider next week.

The previous draws against Bulgaria and Wales do mean that if Ireland can avoid defeat at home to Bulgaria on Wednesday they can at least avoid relegation to League C of the Nations League.

David Brooks scored the winner on the night on 66 minutes and Ireland pressed hard to try and get that equaliser late on but to no avail.

Jack Byrne was brought on in the final ten minutes – the Shamrock Rovers midfielder becoming the first League of Ireland player to play competitively for Ireland in 35 years.

The Boys in Green were caught going forward, though, in injury time with Jeff Hendrick being sent off when he took down Tyler Roberts as he was racing clear on goal.

The game in Dublin between the sides last month was a tight scoreless affair that Kenny described this week as “evenly-contested,” with his team having the “better chances”.

Certainly that was the case again in Cardiff with a similar situation to the last time out with Ireland creating the better of the opportunities in the opening 45 minutes.

The Boys in Green looked to exploit the physicality of Shane Duffy, who went close inside two minutes. He couldn’t quite get his head on an inswinging Robbie Brady free kick on the edge of the six-yard box.

Brady probably had the best of the chances after that when the lively Daryl Horgan and Matt Doherty linked up on the left.

When Horgan’s centre was cleared, Brady let fly from outside the box with the ball just clearing the crossbar.

On the half hour mark, James McClean, returning to the team after his red card against Wales in Dublin, forced Danny Ward into a decent save with his feet after he got a low driven shot on target.

A few times Ireland were too loose with their passing as Welsh pressed on. Hendrick and Darren Randolph were the culprits as Ireland tried to best the Welsh press.

At the other end Brooks had a shot blocked by Kevin Long and Gareth Bale, returning to the Welsh side, went close with a freekick from distance.

His effort went a whisker over the crossbar, and twice Duffy had timely interventions to stop other Wales chances in the box.

When Jason Molumby and Joe Morrell clashed in midfield they both received yellow cards from the Czech referee Petr Ardeleanu when Morrell’s kicking out at Molumby might have warranted a card to match the colour of his shirt.

Bale did get sight of goal early in the second period but he didn’t get enough power on it  to trouble Randolph.

Ireland were the brighter team after that and Adam Idah almost exploited a poor touch inside his own six yard box by Chris Mepham. Idah won the ball turned and shot only for Mepham to block behind for a corner.

Ireland fell behind on 66 minutes, though slightly against the run of play, after a Dan James cross from the left was flicked on by Duffy.

It came to the back post where Bale outjumped Doherty to force the ball across the six-yard box where Brooks was on hand to head home.

Kenny brought on James Collins with a quarter of an hour to go in place of Idah and he drew a save from Danny Ward immediately after he came on.

They almost added a second deep in injury time only for Hendrick’s intervention to snuff that out. His red card was justified but just added to the disappointment of another defeat for Ireland in the UEFA Nations League.

Kenny will be hoping for a better result – and some better luck – in the Aviva Stadium when Bulgaria come to town next week.