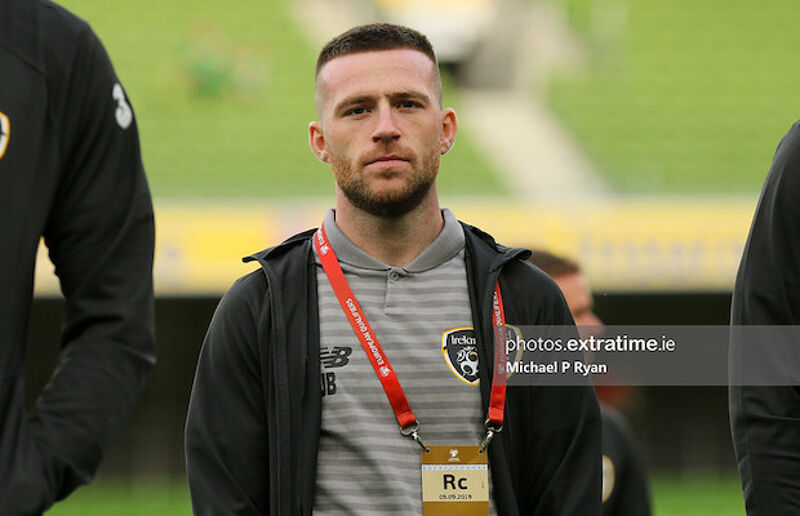 Shamrock Rovers midfielder Jack Byrne this evening became the first League of Ireland player to make an appearance for the Boys in Green in a competitive game since 1985.

Stephen Kenny brought him off the bench in the UEFA Nations League game against Wales in Cardiff in the 81st minute in the 1-0 defeat.

35 years ago it was another Hoops player who last had that honour when then Shamrock Rovers captain Pat Byrne played against Denmark in a World Cup Qualifier for Mexico ‘86.

The midfielder made eight appearances for Ireland between 1984 and 1986.

Byrne has already earned two Ireland caps having made his debut off the bench in Dublin against Bulgaria in a September friendly last year before playing in another friendly the following month against New Zealand.

He was the only unused outfield substitute when Ireland drew 0-0 with Wales last month and then he missed the match against Finland having tested positive for COVID-19.

extratime.com highlighted to Kenny after the game the significance of the appearance for the Shamrock Rovers midfielder.

"We needed a bit of creativity but Robbie Brady was playing very well in the match so we were loath to take him out of the game but Jack might give you something different.

"He has the ability to do that and he nearly did it  when he put James Collins in at the end.”

With Jayson Molumby and Jeff Hendrick both suspended for the game against Bulgaria next week it may provide another opportunity for Jack Byrne to get some game time.