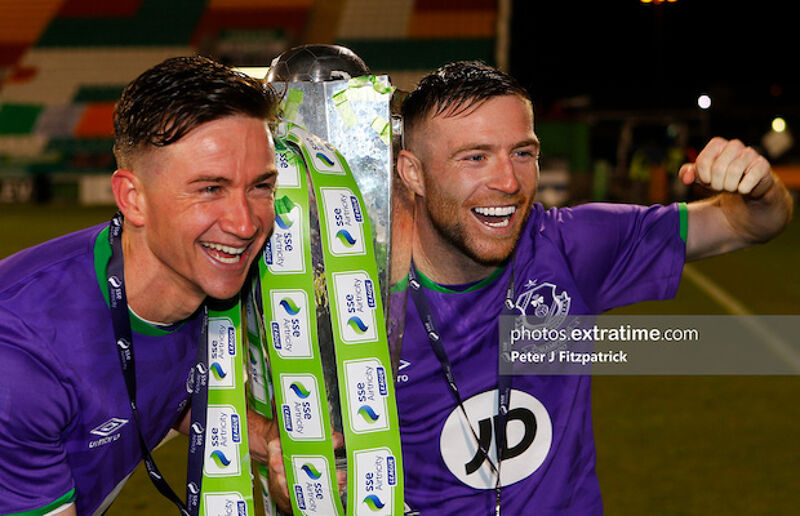 The newly crowned champions Shamrock Rovers have an unbeaten season on their mind when Derry City are the opposition in Saturday for the final home league game of the season in Tallaght Stadium (kick off 3pm). The Hoops are two games away from becoming the first side to avoid defeat in a league campaign since the 1926/27 season.

Rovers’ winning league run of six consecutive victories came to an end last Wednesday night with a 0-0 home draw with St. Patrick’s Athletic. It didn’t dampen the title winning celebrations though amongst the players and management after the match in Tallaght when Rovers received their winners medals before captain Ronan Finn lifted the trophy.

Reflecting on the title celebrations during the week, Hoops Head Coach Stephen Bradley said “it was a great night for everyone involved in the club, the players and staff because we’ve had to be patient as we won it a few weeks back.

“There’s nothing like getting your hands on the trophy and getting your medal so it was a great evening. At the start of the year your aim is to try and win the league because it’s the main competition and when we go and achieve that it’s special because you know the work that’s gone into it. So you could see that with everyone’s celebrations and the joy on everyone’s face.”

It was their second scoreless draw of the season against St. Patrick’s Athletic in what was a tight game in Tallaght that could have gone either way. ““We were okay in patches and sloppy in other patches. That’s to be expected considering the layoff we’ve had. It’s our second game back (after a three game COVID-19 related postponement).

“I think you always get away with the first game after a layoff because that bit of adrenaline usually gets you through it but it’s the second or third game that catches you and it looked like that one caught us. We weren’t our usual selves.

“I think it’s a different game if we’re playing regularly and we have our legs and games under our belt. The pleasing thing was that even though we weren’t at our best we didn’t concede, which was important.”

The Hoops had to deal with the sending off of Joey O’Brien on 70 minutes - Rovers’ first red card in the league this year. “It’s obviously not ideal going down to ten men but we know how to deal with it, we’ve trained for it and they’re ready. They dealt with it really well and worked hard for each other and never panicked.”

Jack Byrne made a return to playing, after he got coronavirus, and was a 24th minute replacement for Graham Burke who picked up an ankle injury (but is expected to be available on Saturday).

“We didn’t want Jack to come on quite as early as that, we wanted to get him on at half-time but it’ll do him no harm because he hasn’t kicked a ball in five or six weeks. He got hit pretty hard with it (COVID-19). He was the worst out of our players that got Covid. He’s only back on his feet the last week really, he only trained a few sessions and only one of those was a full session.

This is a twice re-arranged game for Derry City in Tallaght Stadium as the original fixture set for mid-October had to be postponed initially due to a positive COVID-19 case in the Rovers squad before Derry City couldn’t fulfil the re-arranged fixture due to a coronavirus case in their own camp.

This means both clubs will have to play Saturday and then Monday as all five Premier Division games are moved 24 hours from Sunday to Monday. The Candystripes league campaign will conclude then away to Cork City.

That will bring to a close a season with half the number of matches as had been planned originally and has been extended three times - first following the long COVID break, secondly following Dundalk’s Europa League qualification along with coronavirus issues in the St. Patrick’s Athletic camp and finally the last set of games being moved to facilitate Saturday’s re-arranged game in Tallaght.

However, with it being just an 18 game season, the Candystripes also still have the chance to finish in the top four should they secure all six points on offer in the next few days.

That might well be difficult having to play two games in three days on the back of a squad only just now coming out of their 14-day isolation period.

The last time these sides met Derry City felt hard done by as they lost 2-1 after conceding a comedy own goal through Colm Horgan on 78 minutes with Pico Lopes scoring the winner three minutes later.

MATCH STATS
The Hoops won three games against the Candystripes last year – a 2-0 victory in the first game in Tallaght that season along with 1-0 and 2-0 wins in the Brandywell. Derry came from two goals down in Tallaght in June to draw 2-2 in the other league encounter.

It is over three years since Derry last beat the Hoops – that was a 2-0 win in Tallaght in August 2017.

Derry City were the first away team to win a match at Tallaght Stadium. The Candystripes beat the Hoops 2-1 in March 2009 coming from behind after trailing to a Dessie Baker strike thanks to goals from Thomas Stewart and Ciaran Martyn