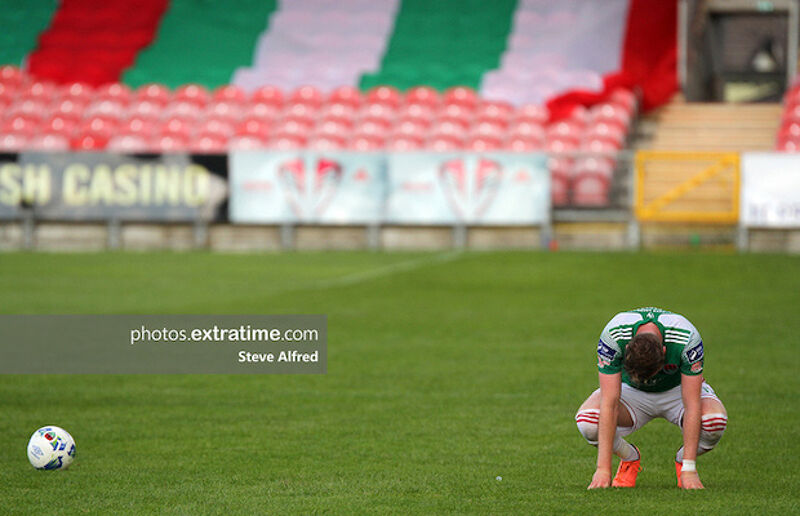 It was July 2018 when Kieran Sadlier stepped up in the second half and put the ball down for a crucial penalty kick in Turner’s Cross. Facing him was Gavin Bazunu, the 16-year-old Shamrock Rovers goalkeeping sensation who had just been promoted from the club’s academy.

All Sadlier had to do was score and Cork City would remain two points behind Dundalk at the top of the Premier Division. Never before had a City team retained a league title, not in 1994 and not in 2006, and this group were determined to change the history.

Sadlier, who had scored all five of his penalties that season, struck low but the teenager saved. The game finished 0-0 - the Leesiders’ first dropped points at home in the league that season. Dundalk’s lead at the top grew to four points. City, who at the time were the reigning league and cup double winners, had their grip loosened on the two most sought after pieces of silverware in Irish football for the first time.

Three years later and City have been relegated to the First Division as the basement side in the shortened 2020 Premier Division campaign. Finn Harps sealed their faith by beating Bohemians 2-0 at Dalymount Park on Saturday night. The result also handed the league title to Shamrock Rovers, their first since 2011.

Cork City’s relegation comes following a month which saw Head Coach Neale Fenn depart the club after just 14 months in charge and the board of FORAS backing a proposed sale of the club to Grovemore Limited, the owners of Preston North End. On top of this, fan favourite winger Daire O’Connor was released by the club in a move which ‘baffled’ the 23-year-old.

The bigger picture is more of a bleak year than week. Last year their application for a license for the 2020 Premier Division season was rejected by the FAI and attempts to court local businesses for finance proved unfruitful. The situation was resolved by Preston at the 90th minute last Spring in a week which could have ended in the club’s extinction.

The story of City’s fall from grace begins in their ascent. The form which was displayed in the first half of the 2017 was unseen in Irish football as City won an incredible 24 of their first 25 games in all competitions. This run was helped by the performances of striker Seani Maguire, who scored 20  goals in 21 league games for the Rebel Army.

Following his transfer to Preston North End that July, City won just four league games in the final few weeks of the season. The title was eventually clinched in October with a scoreless draw at home to Derry and three weeks later City beat Dundalk on penalties to win the FAI Cup and complete the double.

The euphoria of lifting the two biggest prizes in Irish football led into a frenzied start to the 2018 season. After coming back from 2-0 down to beat Dundalk in the Presidents Cup, City saw off St. Patricks Athletic, Waterford, Sligo, and Bohemians to have a near flawless opening to their title defence. Even though they lost to the Lilywhites in March, they were steering the title race well into the mid season break.

Disaster struck in the first game back. A last minute own goal from Sean McLaughlin gave Dundalk the win in Oriel Park and meant only a two point lead over City in the title race. Seven days later a succession of missed chances and a saved penalty led to Shamrock Rovers leaving Turner’s Cross with a point.

City’s return to the Champions League, which brought a minimum of €800,000 in prize money to the club, paired them with Polish giants Legia Warsaw. While they did battle hard at home, losing 1-0 because of a late wonder goal from Micha Kucharczyk, Legia won 3-0 in the away leg. City’s European adventure continued in the Europa League qualifiers. There they were soundly beaten 5-0 over two legs by Norwegian heavyweights Rosenborg.

When the club returned to domestic duties, results suffered. A 1-1 draw at home to St. Patrick’s Athletic was followed up by a 2-1 defeat by Sligo Rovers at Turner’s Cross. A 4-2 hammering by Bohemians at Dalymount Park, a game which included a comical own goal from Damien Delaney, was the real nail in the coffin of City’s title defence. Seven days later Dundalk beat City 1-0 at the Cross to kick start their title party.

2018 closed out with a double blow for the club. First, it was announced that the budget would be cut by €300,000 and three weeks later City were beaten 2-1 in the FAI Cup final by Dundalk, who had wrestled back both trophies from the Leesiders.

Despite the end of season slump, John Caulfield was adamant that the club would remain competitive in 2019. For the new season the team was freshened up with the additions of Liam Nash, Darragh Rainsford, James Tilley, and Dan Smith who signed along with a number of youth players from the club’s academy. These arrivals were mirrored the departures of Kieran Sadlier, Jimmy Keohane, and Steven Beattie, who were all pivotal to the club’s 2017 successes.

There were teething problems with the new look team. The Presidents Cup was won by Dundalk and and then St. Pats and Waterford beat City in the first two games of the league. Form was eventually found through victories over Sligo Rovers and Harps, but the club were sliding down the table.

Shamrock Rovers won at Turner’s Cross for the first time in six years in April and two weeks later UCD beat City at Belfield. The poor start to the season, which could not be saved by winning the Munster Senior Cup, led to the departure of John Caulfield as manager in May.

His assistant John Cotter was tasked with steadying the ship. Early signs of form were seen in victories over Bohemians in Dublin and against UCD at home. This soon faded and City slid into the relegation battle. Losing out to Luxembourg minnows Progrès Niederkorn saw an early exit from the Europa League. A few weeks later First Division Galway United knocked City out of the FAI Cup, their earliest exit from the competition in five seasons.

The man tasked with saving the club was Neale Fenn, who had won the league tile with City in 2005. Following a difficult start, which saw back to back home defeats to Sligo Rovers and Waterford, draws turned to wins and the Rebel Army stayed up by beating UCD and reigning league champions Dundalk at the end of the 2019 season.

In the background, the club were struggling. A combination of factors, including a €150,000 tax bill and debts owed to their bank, led to the club getting denied a Premier Division license for 2020. City went to the bank to refinance their debts but were denied due to the situation in Irish football last year.

To secure immediate stability, the club tried to secure financing from over 20 local businesses, but were not successful. City eventually went to Trevor Hemmings of Grovemore Limited to source finance to secure a license. An initial €199,000 deal for Cork City to surrender sell-on clauses for Alan Browne and Seán Maguire was not deemed sufficient by the FAI to meet financial requirements relating to a licence.

As a result, City had to re-approach Preston North End and come to an agreement worth €450,000, including first refusal on a takeover bid for Preston owner Trevor Hemmings.

With just days leading up to the first game of the season clouds began to form. “What I do know is that before the Shelbourne game (first game of the season), me and Neale were told on Tuesday that there was a chance that the game might not go ahead because the club owed Revenue a six figure sum," assistant manager Joe Gamble told LOI Weekly this week.

A license was eventually secured and two days later City were beaten 1-0 by Shelbourne at Turner’s Cross in their first competitive game of the new season.

The squad which was assembled by Fenn was a mismatch of promoted youth players, seasoned professionals, and loanees from England. This was all done on a shoe string budget, which was a consequence of the club failing to quality for the Europa League in 2020.  “When that didn’t happen, we got into a situation where we are now – no doubt about it, we had to make cutbacks and reduce our playing budget,” club chairman Declan Carey said in an interview with The Echo.

Any honeymoon period for the team was shattered just a week into the season when Shamrock Rovers put six goals passed them in Tallaght Stadium, the heaviest defeat ever by Cork City in the League of Ireland.

Prior to the cessation of all footballing actives over the COVID-19 pandemic, City had just two wins in all competitions, a 1-0 victory over Finn Harps in the league and a laboured 2-1 win against Mayfield United in the Munster Senior Cup. When football came back, Bohemians were the visitors, and the first game of the resumption saw the Gypsies leave Turner’s Cross with a 1-0 victory. Slowly the club was sliding into a relegation battle.

There were bursts of form from the team. Fenn’s team snatched a point away to Waterford FC and three days later dispatched of Longford Town in the FAI Cup through a last gasp goal from Ricardo Dinanga. That Friday Sligo Rovers were beaten 3-0 by the Rebel Army. The following week the club went 1-0 up away to Derry inside ten minutes. For the first time in a long while, the fans seemed to have something to cheer about.

Then, a loss in the Brandywell fell into defeats against Rovers in the Cup and in the league. A do or die game away to Harps ended in a draw and last weekend St Pat’s won 2-1 at Turner’s Cross.

The moment that seemed to cement relegation was a missed chance in the dying moments against Waterford at the Cross. As the two sides stared each other down in one of the most tense Munster derbies in recent memory, Cian Coleman had a shot roll along the line in the 92nd minute. The game finished scoreless as Harps went two points clear of City with two games in hand.

In the end, the relegation came slowly in Sligo. Kit Elliot, the on loan teenage striker stepped up to take a penalty but Sligo goal-keeper Ed McGinty saved and minutes later the Bit O’Red went ahead at the Showgrounds. A furious kick-back to salvage the season was undone by a penalty from Ronan Coughlan.

To pinpoint exactly why City went from double winners to relegation is difficult. In the helter skelter landscape of Irish football, it can be any one factor with a dozen to chose from. Whatever it was, certain moments stand out, and City fans will not be forgetting them any time soon.

Even if the league title is won in an empty rival's stadium and there's nobody around to hear it, it still makes a sound https://t.co/FJd0qf3hPa pic.twitter.com/FnnO0Jdppy