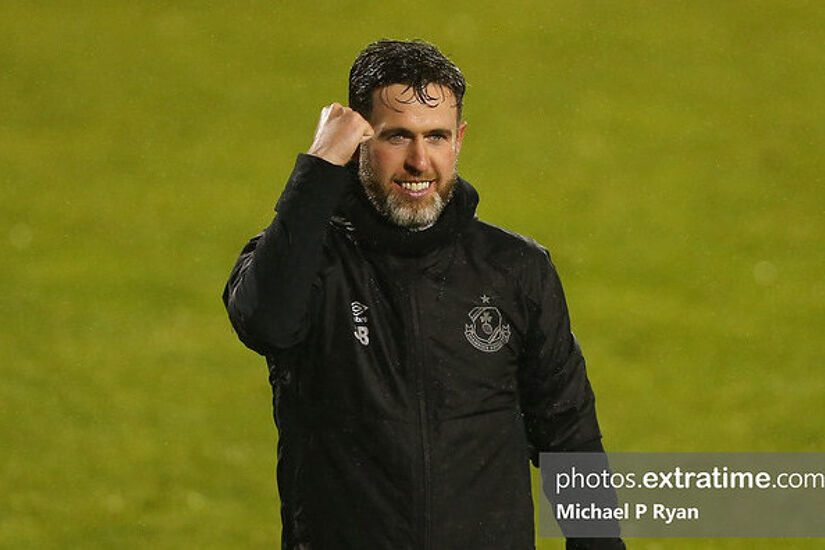 Even if the league title is won in an empty rival's stadium and there's nobody around to hear it, it still makes a sound

Shamrock Rovers clinched the league title in Dalymount Park on Saturday night and they weren’t even playing and at a time when several of their players are in a period of isolation due to positive COVID-19 cases in the Rovers camp.

The Hoops won the title in what must rank as one of the strangest seasons of League of Ireland football.

When the Premier Division started back in February as a 36 game campaign and is just about getting over the line in November as an 18 game affair with the COVID-19 crisis cutting the season in half and positive tests in the finals weeks seeing the season extended on two occasions.

It is an 18th title for the Hoops extending their record as the most successful League of Ireland team. Outside of the club, many will claim that it is a tainted league title or joke that the record books should read 17.5 league titles for Rovers. Asterix as the new mascot to work alongside Hooperman in Tallaght maybe?

For Shamrock Rovers supporters they won’t mind these jibes – the league table shows who the best team is and the Rovers were so far ahead of the other teams that they managed to win the league by playing only 14 games - winning a dozen and drawing the other two.

The Hoops have the chance of going through the league campaign unbeaten. Only twice before has a team been invincible in a league season and on both occasions it was the Hoops who managed it across 18 match league campaigns in the 1920s.

The shame for Hoops supporters has been that, bar the first five games of the year, they haven’t been able to be in Tallaght Stadium or the various venues around the country to watch their team win their first league title since 2011.

Fans from across the league acknowledge that WATCHLOI has been a great service but nothing beats going to a game with friends and family and celebrating goals or your team’s success.

You can have all the WhatsApp groups you like but nothing beats that chat at half-time in the stadium discussing what needs to be done in the second half or the post-match debrief in the pub, on the bus or in the car on the way home.

During the long wilderness years for Rovers post-Milltown, the Hoops historical success was something that sustained the supporters as the club rented ground from their rivals.

On some of the many dark days when out on the pitch the Hoops were losing, the chorus from the stands was about the famous four-in-a-row won in the 1980s and there was a fear that Dundalk might match or even beat that record.

Rovers had a 3-2 victory in an instant classic against Dundalk early in season giving them a three point lead during the long coronavirus break but post-release from lockdown the Lilywhites imploded in the league.

It meant by the time Rovers went to Oriel Park they were able to take advantage of Dundalk’s Europa League distractions to win 4-0 and confirm no additional three-in-a-row for the Lilywhites.

Winning the league has secured that vital entry into the lucrative Champions League qualifiers – in the last decade League of Ireland teams have now qualified three times for the Group Stages of the Europa League through the champions route.

The title is also a rich reward for Stephen Bradley who has taken plenty of stick from outside and indeed inside the club. The Hoops Head Coach has grown into the role, virtually clearing out the dressingroom from when he took over in 2016.

He weathered a difficult period in 2018 when Rovers managed three wins from 15 games during a time that the Hoops lost seven out of eight derby games against Bohemians.

Outside of the club phrases like ‘cup specialists’ and ‘the project’ were used to criticise Bradley but having secured the Hoops a 25th FAI Cup (after a 32 year wait) last season and backing that up with a league title earned in dominating fashion, everyone at Rovers is happy with how the project is progressing.

The previous league titles for the Hoops came during Michael O’Neill’s tenure in 2010 and 2011 with the titles won on both occasions in dramatic fashion.

Rovers fell over the line in 2010 going to virtually the last kick of the ball in the season. The Hoops clung onto a point in Bray to beat out Bohs to the league title race thanks to a better goal difference of two. It sparked scenes of massive celebrations by the seaside for Hoops supporters as the club won their first league title since 1993/94 - their solitary title in the six seasons playing in the RDS.

The following year Rovers wrapped up the league title in the penultimate game of the season in Belfield but only thanks to a winner deep in injury time. The pitch invasion at the final whistle and the trophy presentation in Tallaght the following week are nights that will live long in the memory of Rovers fans.

In 2020 the title was won thanks to Finn Harps beating Bohs in Dalymount for the first time this century while supporters could only watch online. So there was no joyous Rovers pitch invasion and the trophy presentation in the coming weeks won't be in front of a packed Tallaght Stadium and that really is the only shame for Rovers supporters.

They toasted their team last night from the comfort of their own living rooms, swapped messages with mates via WhatsApp and there were zoom calls to celebrate the title success.

Now they are dreaming that when the league returns in 2021 it will do so with supporters in the stadium cheering on their team and singing about “18 leagues and 25 cups” for Shamrock Rovers.