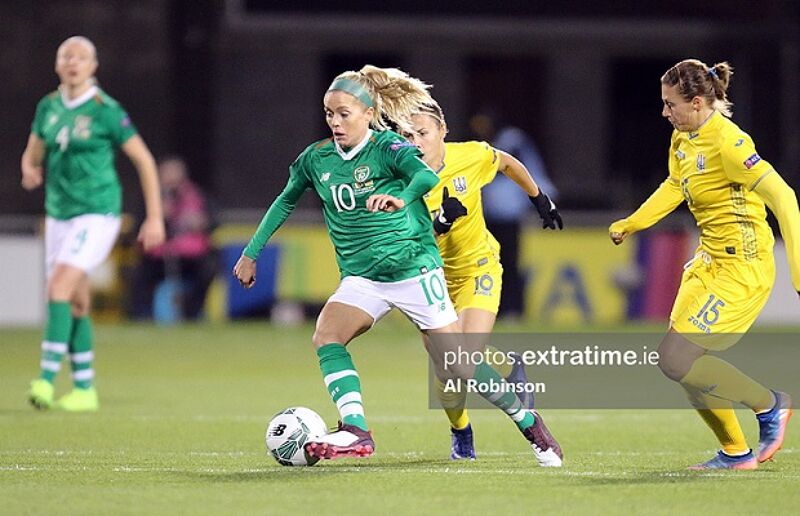 The Republic of Ireland will have to beat Germany in Tallaght next month, or rely on results elsewhere to go their way, after falling to a crushing 1-0 defeat to Ukraine in Kyiv.

A mix-up between Courtney Brosnan, making her second appearance in goal, and Aine O’Gorman, making her 104th, saw the latter’s passback skew into her own net.

Captain Katie McCabe hit the crossbar twice, once from the penalty spot, as Vera Pauw’s side slipped to a scarcely believable defeat in a game they dominated from the first whistle.

Ukraine travel to Greece on Tuesday knowing that two wins from their remaining games will see them finish second – unless Ireland beat the side ranked second in the world.

Given that is an unlikely outcome – even a second-string German side would expect to beat most others – there was a palpable sense that the Girls in Green had blown their one chance.

A sea of crestfallen faces at full time told its own story as the Irish were left to rue their inability to turn possession into meaningful chances, with just three shots on target from 13 efforts.

Ireland have never reached a major international tournament but looked likely to, at least, have a play-off in their hands as they travelled to Kyiv needing only a draw.

The home side certainly didn’t approach the game like a side that had no option but to win and were happy to sit back and allow Ireland possession in their half.

A spell of early pressure brought a succession of corners, three in as many minutes inside the opening five. McCabe switched up her delivery but yielded only a meek Louise Quinn header.

Ukraine struggled to hold onto possession, leading to repeated waves of Irish attacks but they found the deep-lying defence a tough nut to crack.

The best outlet for Ireland was winger Heather Payne, who had the measure of left-back Natiya Pantsulaya, and it was her blocked cross that led to Harriet Scott shooting over.

A wonderfully-weighted pass down the left from Denise O’Sullivan almost gave Rianna Jarrett a free run on goal but goalkeeper Iryna Sanina raced out of her box to scramble clear.

Centre-half Lyubov Shmatko had an eventful game when the sides met in Dublin last year, scoring at both ends of the pitch, including what would turn out to be Ireland’s winner.

She had no less an eventful night in Kyiv, finding herself booked after 15 minutes for a clumsy tackle on the Ukraine box.

McCabe stood over the free kick and clipped the ball up and over the wall and cracked the top of the crossbar, though Sanina probably had it just about covered had it dipped lower.

For all their pressure, Ireland produced little clear-cut, and could have paid the price when Olha Boychenko crossed for Nicole Kozlova, and only a timely O’Gorman intervention saved Ireland.

O’Gorman’s luck was about to run out, however, though she could take little of the blame for the miscommunication that led to the game’s only goal on 25 minutes.

Captain Daryna Apanaschenko played a probing diagonal pass for Kozlova to chase and, under pressure, O’Gorman stretched to divert the ball back towards her goalkeeper.

Brosnan initially appeared to be well-positioned to control the ball but, flat-footed, she allowed the ball to roll past her and into the net. Ukraine now had a lead to protect.

Ireland, to their credit, didn’t let the concession faze them and immediately continued their pressure in the Ukrainian half.

They got their reward seven minutes after falling behind when McCabe split the Ukraine defence with an inch-perfect pass and Jarrett found Payne out wide.

The Florida State Seminoles winger picked out the late run of O’Sullivan in the box and she was hacked down by the despairing Shmatko.

Referee Ivana Martincic had no hesitation pointing to the spot but deemed the offence unworthy of a booking and what would have been the defender’s second yellow.

If Ukraine were fortunate still to have 11 on the field, their luck was compounded when McCabe rattled the crossbar once more from 12 yards.

The sense it wasn’t to be Ireland’s night was reinforced on the stroke of half time when Payne picked out Jarrett masterfully and the striker turned the ball goalwards, only for it to be cleared off the line.

Ukraine coach Nataliya Zinchenko made two changes at the break Payne’s menacing of left-back Pantsulaya ended her night prematurely with debutante Anastasia Voronina on in her place.

Voronina lasted just 25 minutes herself as Payne continued to have free rein on the right wing, though she should have done better when played in ten minutes after the restart.

By then, Jarrett had already stung Sanina’s palms with a firmly-struck shot from a tight angle after more good work from O’Sullivan.

Ukraine had half-chances of their own, Apanaschenko volleying over as Ireland struggled to deal with a cross and Kozlova’s potshot from distance that never looked like troubling Brosnan.

As the clocked ebbed away, Ireland’s attack became blunted and Ireland’s only efforts of note were shots from distance, from McCabe and O’Sullivan, that easily cleared the crossbar.

Pauw waited until four minutes from time to change it up, introducing 16-year-old Ellen Molloy for her debut and Amber Barrett, and they had little time to influence the action.

While McCabe continued to pepper the box with crosses, and Ukraine continued to deal with them as efficiently as they had for the whole of the game, the home side could have scored a second.

Brosnan was almost involved in another mix-up as she and McCabe went for the same ball on the edge of the box, but the captain emerged and the crisis averted.

Kozlova might have done better in the dying moments when she met a cross from the right but didn’t get enough purchase on her header. It wasn’t to matter.

Extratime.ie Player of the Match: Heather Payne (Republic of Ireland).