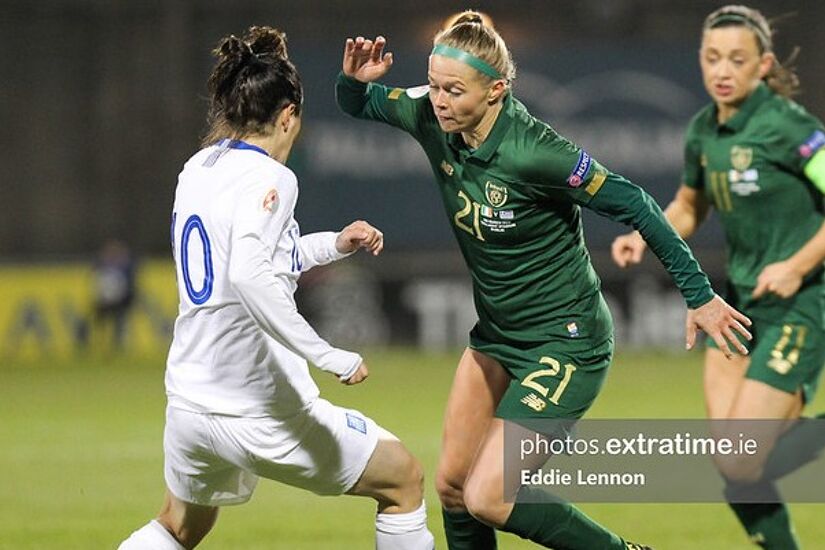 Ruesha Littlejohn: For some of us, this could be the only opportunity that we get at qualifying again

The last time the Republic of Ireland faced Ukraine, Ruesha Littlejohn was looking on from the stands.

The Girls in Green secured a 3-2 victory in Tallaght that night, marking the beginning of Vera Pauw’s tenure in charge with three points.

Littlejohn, speaking this morning at an online press conference that was attended by extratime.com, admits that it was difficult to be a spectator as a new era of women’s football in Ireland began to unfold.

“It was hard being out of the squad for such a long time,” she said, speaking to the media prior to Friday’s European Championship qualifier against Ukraine.

Fast-forward 12 months and Glasgow-born Littlejohn is now a central part of Pauw’s plans for qualification. Avoid a loss on Friday and Ireland will secure a play-off spot, and an all-or-nothing chance to make it to a major tournament for the first time.

“I’m really delighted that Vera has brought me back into the squad.

“It's great working under her. You know, she's worked with teams in the past, she's always worked at a very high level, so it's great to have someone with her set of knowledge and experience, to be working under and learning from.”

After being handed the opportunity by Pauw to be a part of the international set-up after her absence, Littlejohn is eager to make it count.

Along with other squad members, the Leicester City star is acutely aware that this qualifying campaign is the last chance saloon. Having made her senior international debut in a green shirt over eight years ago, this time around could be the last throw of the dice.

“For some of us, this could be the only opportunity that we get at qualifying again, so we know how big it is.”

“At the same time we wouldn't have it any other way. You know, the pressure's on, but we're very lucky to be in this position.”

“It's been a long time coming, but you know, it's great now to be in this position... we're just looking forward to it.”

The pressure is certainly on – but this is something to revel in rather than recoil from, Littlejohn maintains.

“You play football, there's always pressure on when you're playing football.

“Like they say, pressure is a privilege in playing football, so we just have to see it as just a game. We can't let the surroundings and the occasion get the better of us. We just need to be focused and be calm.”

The Irish camp have been abiding by strict coronavirus guidelines as they prepare for Friday's match. This hasn’t stopped fierce debates between Littlejohn and Ireland teammate Katie McCabe regarding the latter’s stunning strike for Arsenal over the weekend, however.

“She was quite happy with it… she’s still claiming that it was a shot,” she joked when asked about McCabe’s free-kick.

Intentional or not, Littlejohn believes that partner McCabe’s form is good news for Ireland: "It's great to have her in such good form going into this game."

Looking ahead to the clash, Littlejohn is certain that Vera Pauw’s charges can secure the all-important play-off spot if they can neutralise the Ukraine threat.

“I think for us we just need to focus on not switching off, not getting complacent. They're very good on the counter, they've got fast players.

“We'll be aware of that, and hope we can deal with that and manage it well.”

Leanne Kiernan: We've never qualified for a major tournament and this is probably our best chance https://t.co/RShbXSvvkD pic.twitter.com/Rm59oGqXaZ