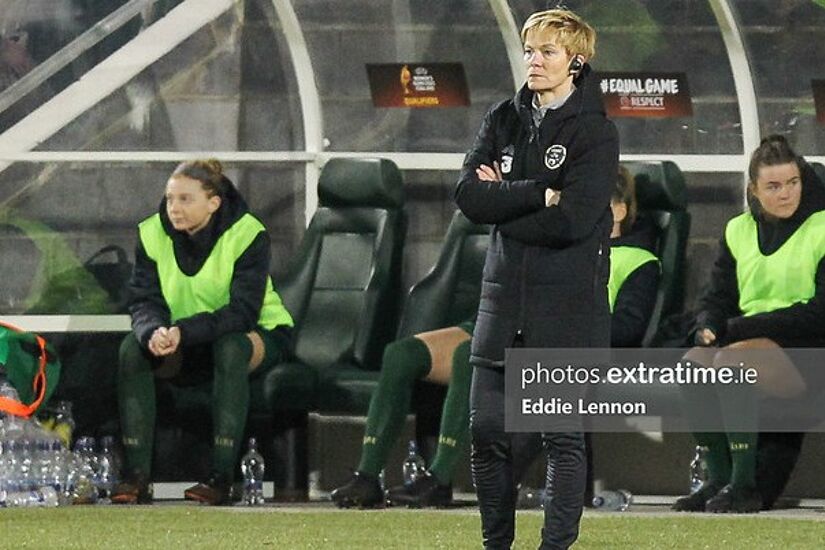 Vera Pauw: You can see the gap between the Irish-based players and the professionals is getting closer

This Friday’s game, away to Ukraine, is one of the most important matches ever played by a Republic of Ireland’s women team. As the teams gathered in Dublin before taking their FAI chartered flight to Ukraine (the first time the women’s team have ever been afforded the luxury of a chartered flight), the tension was high as excitement buildds towards Friday’s decider.

Win or draw on Friday, and Ireland will guarantee their place in the play-offs for Euro 2022. Lose, and they’ll need a win at home against two-time world champions Germany.

Looking back over the progress this Ireland team has made during this qualification campaign, Ireland manager Vera Pauw is proud of the squad’s development, and thankful to her predecessors for their hard won in preparing this squad for occasions such as these.

“This team has come so far over the last [number of] years and we’re now just at this last little bit and I’m so grateful for everything that was done before I was in charge because now we are in the position, already, where we can qualify for play-offs,” she says, before adding; “They are so ready to make this last step and as a coach, to work with a team that is just on the edge of achieving and feel that this is their moment, it’s just a joy to work.”

Ukraine came to Dublin in October of last year for a match which saw Ireland come out 3-2 winners during a tense affair. That was Pauw’s first game in charge, and since then she has seen the skill levels within the squad increase dramatically, especially among the Ireland-based players.

Earlier this month saw the men’s national team succumb to a number of breaches to their COVID-19 team bubble, and with such a crucial game to come, extra restrictions have been put in place to prevent such an outbreak raging havoc on the women’s preparations. Speaking about the potential threat of an outbreak, Pauw admitted it’s something her team have been trying to combat ahead of the squad’s arrival.

“It concerns us very much,” she admits, “The only consolation is that we are so aware of it this week that everyone has self-isolated themselves. What I’ve heard from the players is that they were really trying to stay away from people. I’ve isolated myself, my staff isolated themselves, I’ve not been out to friends or family, just to the shop like all our staff.”

One such added precaution is the FAI’s chartering of a private plane for the squad to travel to Ukraine. “Having to travel on a normal airplane, the risk of getting the virus is huge,” Pauw noted. “I got the message that we are flying with a charter, fantastic, it shows the change in thoughts that the women’s game are in every single discussion, and they have shown now that it is not just discussion but that it is serious”.

Another added precaution is a ban on players entering each other’s hotel rooms. Players are no longer allowed to socialize in rooms, but are asked to meet in designated socializing spacing, while strictly adhering to a 1.5m distance, as required by Ukrainian public health guidelines.

“Players are also asked to wear face masks at all times, unless we are eating, even in meetings” Pauw adds of the guidelines, “I’m the only one without a mask because they need to see my expression to get the message across. Those little things we have added.”