Price pleased with progress over season for Rovers II 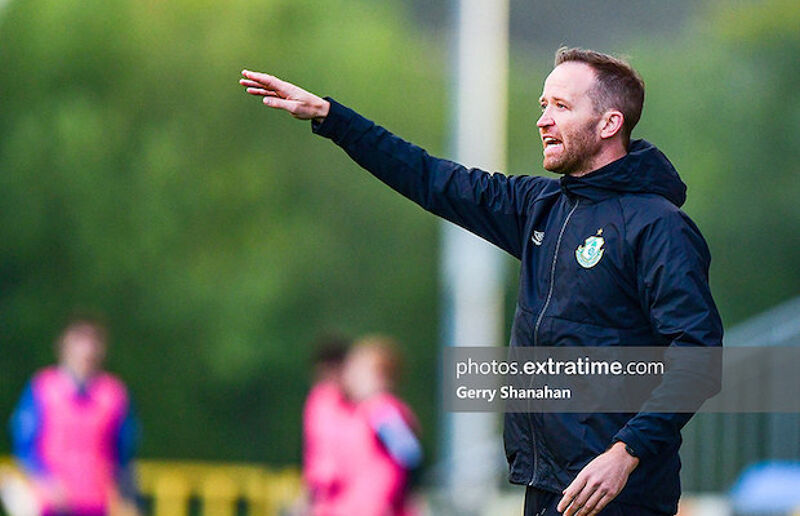 The Shamrock Rovers First Division team played out their final home game of the season on Saturday earning a 3-1 victory over Athlone Town.

Their Head Coach Aidan Price was pleased with his team’s performance on the day - as they came from behind to win for the first time this year - and pleased with how his young squad has done across the season.

extratime.com caught up with the manager after the match to discuss the result and how the season has gone for his team.

“They didn’t panic when disappointedly they fell behind,” said Price about his team who conceded from a corner on 19 minutes.

“It is nice to see the reaction from them today. A lot of our results have hinged on set pieces which is a challenge for us. To see how they responded straight away and continued in the same style in the way we’ve been asking them is a real positive.”

Two goals from Thomas Oluwa along with a goal from in-form Brandon Kavanagh gave them all three points. “I thought he was clinical,” said Price about Oluwa who has scored four times in the First Division this season.

“He got two really good finishes. The first one is quite a natural finish for Thomas but the second one he shifted it and took it early which gave their ‘keeper no chance. Two really good goals for a boy who has worked really hard for us. Attitude wise he has been really good so I’m delighted for him.”

Kavanagh scored his ninth goal of the season from 16 games with Price’s team - six of those goals coming in the last five matches. “He has hit a rich vein of form in the last four weeks. It was great finish with his right foot today. He is a great kid and he has really benefited from being able to play a regular run of games.”

On ten previous occasions prior to Saturday, Price’s team had conceded first and failed to come back and win the game. They also had dropped points in six matches by conceding goals in the final eight minutes plus injury time.

“Reflecting on the season, it has been really good and there are learnings from it. There were a lot of points that we left behind in games that we deserved more from but we will learn from that. That will stand to the players and the club.

“You can see how strong our first team is. That is challenge in itself so for these boys to get the opportunity and the experience of playing in this division has been really good.”

Second time around for second team

This is the second time that the Hoops have had a second team in the League of Ireland. Back in 2014, they had a B team in the First Division but Price believes that the setup at the club is better now at Rovers and he is really keen for the team to continue next season.

“In 2014, the Academy wasn’t in place and over the last six years you can see the quality of players there. As the coach of the team, I’m desperate for it to be here, as the club and the players are as well.

“The attitude of the players has been first class. If they have gone and played with us and then maybe played for the u17s or u19s next week their attitude is still the same. They are the kind of characters that we want to be part of the club.”

The Hoops are allowed use players born since 2000 with one overage player - compared with three outfield players from their Premier Division squad plus a goalkeeper in 2014.

They are also able to play one ‘overage’ goalkeeper with 24-year-old Leon Pohls lining out nine times in the First Division (without making an appearance for Stephen Bradley’s side this season).

In 2014 then manager Colin Hawkins brought eight first team players into his First Division team during the 28 league campaign and they made 14 appearances between them at that level.

This time around Price used just two Premier Division mainstays with Liam Scales playing a game and Sean Kavanagh lining out in their last two First Division games having made just four league appearances in the top flight this year all off the bench.

“Sean has played a few substitute appearances with the first team and has been out since the cup final last November due to injury so it was great for him to get some game time.

“There is an opportunity for players to come in but we don’t feel that we are taking too much advantage that makes it difficult for other clubs in the league. Maybe they felt that might happen. But that hasn’t been the case and I don’t think anybody that we played against can feel that we tried to push it too far.”

Dean Williams, Thomas Oluwa and Brandon Kavanagh have played in both divisions. Williams has made one start in the Premier Division along with eight substitution appearances, while Oluwa and Kavanagh have both made just the one Premier appearance off the bench with the first team.

In 2014 Rovers used 37 players in 28 games finishing sixth in the eight team division earning 0.93 points per game, scoring 25 and conceding 50.

They currently sit ninth in the ten team second tier with one game remaining and hope to jump above Athlone if results go their way.

The average age of the team across the season has been 18.5. Price has called up a number of young teenagers. 14-year-old Sam Curtis made his debut for Rovers on Saturday, 15-year-old Kevin Zefi has started two games and made a further eight appearances off the bench.

A quartet of 16-year-olds have also played - Aidomo Emakhu (ten sub appearances), John Ryan (nine starts and one sub), Michael Leddy (four starts and five off the bench) and one substitution appearance for Ben Curtis.