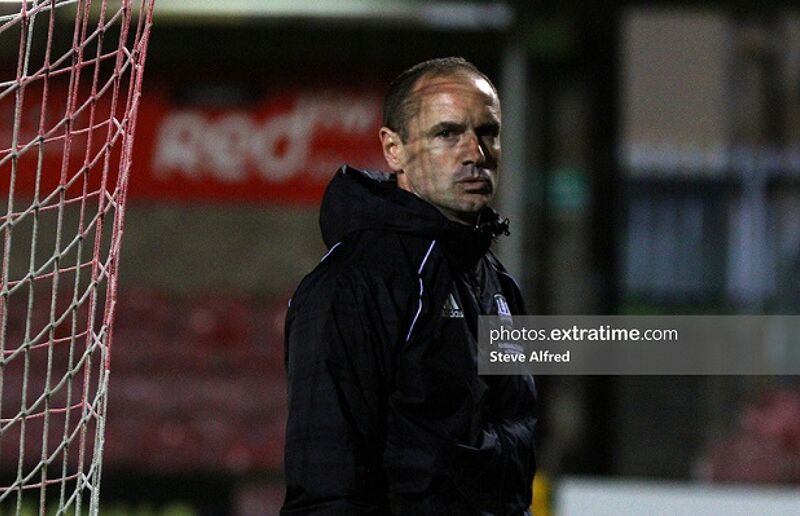 A defiant performance by Cork City on Tuesday evening ended up with nothing as Dundalk won 2-0 at Turner’s Cross through two late goals from Patrick Hoban.

Two goals in two minutes from the striker gave the Lilywhites the points and leaves the Rebel Army bottom of the table, two points from Finn Harps have a game in hand.

Despite the final score, City manager Colin Healy, who is there until the end of the season, remains optimistic that his side can stay up and beat the drop.

“I am confident of staying up,” he said. “We have good players who are hurting after this result. That shows me that they care about the club.

“We all do here. We all want what’s best for the club. We’ll get ready for Waterford now because it is a big, big game.

“It is not nice when you get beat. We always knew it was going to be difficult. Dundalk are a very good side, everybody knows that. They have a lot of players in the squad and they can play two teams.

“I thought we had a good shape to us and the lads worked hard. We had a game plan that I asked them to do.

“Listen, we did give away two soft goals and it you give away anything to Dundalk, you are going to get punished.”

City have two home games left in the 2020 Premier Division season, a Munster derby against Waterford and Derry on the final day of the season. In between they will travel to Sligo Rovers, a club they beat last August 3-0 in their biggest win of the season.

“We we have to focus on Waterford. We’re going to come back in tomorrow and analyse Waterford. It is a very important game and we going to get the lads ready.

“Since I came in, all I ask is the players give everything they got. We’ll see where they takes us.”

Tuesdays game also saw the return of John Cotter to the Cork City coaching staff. The former assistant manager to John Caulfield, who was a key member of the back room team which won the 2016 FAI Cup and the 2017 league and cup double, left the club in August 2019 after the appointment of Neale Fenn.

“He’s been around here the last five or six years and he’s a very talented coach who knows the league inside and out. It’s good to have good people around.”