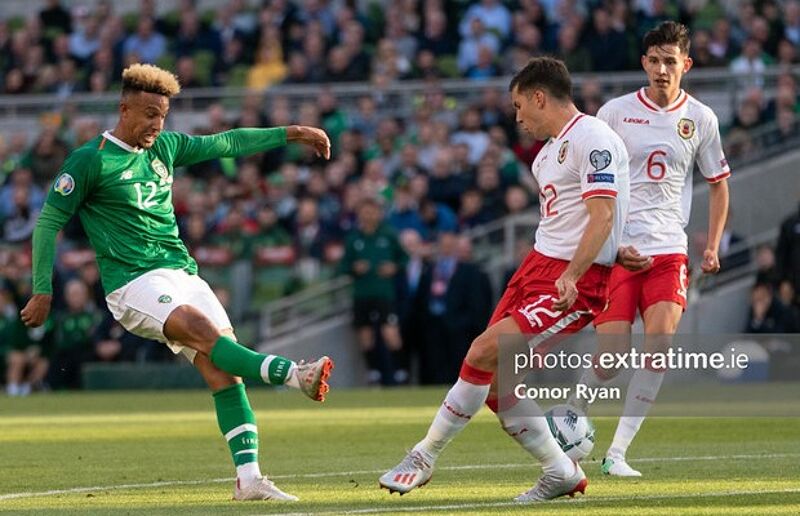 With four games under their belt, the majority of the Ireland squad descended on Dublin fit and raring to go ahead of their Euro 2021 Play-Off match against Slovakia on Thursday.

This is in stark contrast to the last time the squad gathered early in September, which found a squad half-way through pre-season training. Speaking to the media this evening at a virtual press conferfence which extratime.com attended, Irish forward Callum Robinson admitted that there is a different feel around the squad this time around.

“For the first two games we had last month were a little bit harder for us because we hadn’t had a long pre-season” Robinson recalled, “It’s been a little bit tricky over the last few months but we’re all a bit fitter now, most of the players are playing week in week out so we’re a bit quicker, bit sharper so fitness wise we’re all in a good place”.

When asked about his own fitness levels in September's fixtures, Robinson was quick to admit he wasn’t at his best. “I would definitely say I was 75% fit [in September]. We had a few pre-season games but they’re not the same, and it was a short pre-season anyway and we only had 2 or 3 weeks and we had two massive games like that and it was tough”

Robinson has had an impressive start to the season for West Brom, and scored twice at home against Chelsea in his sides 3-3 draw with the London club. He’s hoping his club form will be enough to convince new Ireland manager Stephen Kenny to start him in the make-or-break tie. “You’re with your club more than your national team so you’ve got to do well for your club to be selected and then to get into the starting 11. I’m just trying to enjoy my time with West Brom”. He later added “I’ve been doing well in club level to get into the starting line-up and fingers crossed that can happen and we’ll just have to see how things go on Thursday night”.

Thursday will mark Kenny’s third game in charge of Ireland following a draw and loss against Bulgaria and Finland respectively, but Robinson was positive about the impact the added time to understand the manager’s style of play will have on the squad. When asked if he believed the intervening month between fixtures will have a positive effect on the squads all-round cohesiveness, Robinson was quick to note its benefits. “Yeah of course” Robinson replied, “Club wise lads have been playing and the coaching staff are going to have to try get as much information across in time but obviously we were with him last time so we know the basics of how he wants to approach games”.

Robinson was also asked about recent comments made by international teammate Cyrus Christie, where he admitted to being subjected to racist abuse by Ireland fans, who claimed Cyrus ‘wasn’t Irish’ due to being born in England. When asked for his own experience, Robinson was quick to note he himself had not experienced racism as part of the Irish set-up. “I haven’t had a lot” he recalled, before adding that despite certain players not being born in Ireland, they were “playing for the country because we have Irish in us. We’re giving 100, 110%, it doesn’t matter”