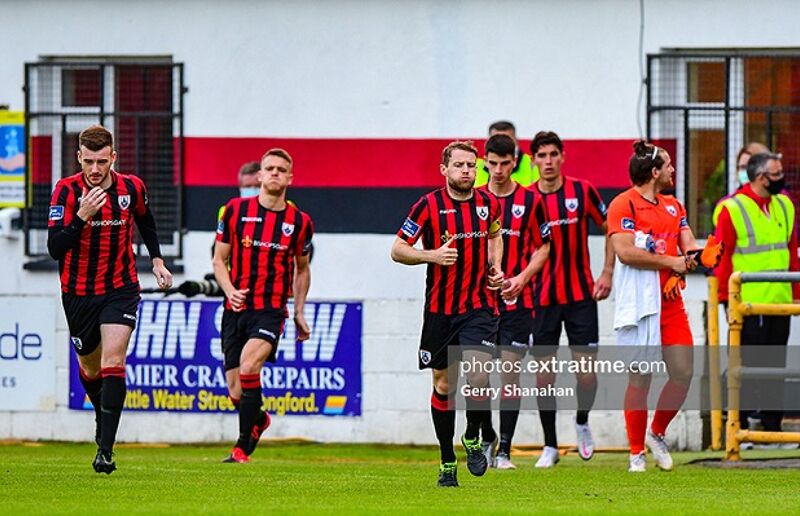 Longford Town will be acutely aware that it is very much a must-win scenario this evening as they welcome Galway United to Bishopsgate (kick-off is at 7.30pm).

Town come into the game fresh from a 4-0 win away to local rivals Athlone Town – while Athlone did Town a real favour last night.

Adrian Carberry’s side incredibly defeated Drogheda United at United Park by two goals to nil, leaving the door wide open for Longford to roar back into the title race.

However, despite their recent upturn in results, Town defender Joe Manley insists that both he and his teammates are focusing on one game at a time ahead of the final four games of the season.

“We’re really looking forward to the game on Saturday,” the central defender said ahead of the game.

“We bounced back well from the defeat in Bray and there’s a real feel-good factor in training and all around the place.

“I think Galway will be a different animal to what we faced down there.

“When we played them last time they impressed me and I thought they were a good side but since the new manager has come in they’ve been in a great run of form. It will be a really good game.”

In terms of team news, Lido Lotefa has returned to full training and is expected to make the squad while both Dylan Grimes and Thomas McLaughlin continue to miss out with injuries.

After the disappointment of last week’s defeat to Cobh Ramblers – Galway United must make the difficult trip to the Midlands to take on Longford Town.

Galway are winless at the Strokestown Road venue in their previous four league outings, and their manager John Caulfield is hoping that his side can bounce back from their latest setback to earn a win this evening.

“Longford have been challenging and Daire Doyle has done a fantastic job,” Caulfield told his club’s media team.

“They’ve largely kept the same team as last season, with a real backbone of experience with the likes of Zambra and Verdon in midfield.

“Longford will be targeting automatic promotion this season. For ourselves, we’re looking forward to the game.

“We were disappointed with our performance last week against Cobh, we’ll hope to do better on Saturday.

“It will be difficult, but up to last week, we’ve been playing exceptionally well and we want to get back to winning ways.”

Galway United have a poor recent run of form against Longford Town away from home, winning once in their previous five visits to Strokestown Road.

Longford Town could move to within a point of Drogheda United should they win this evening.