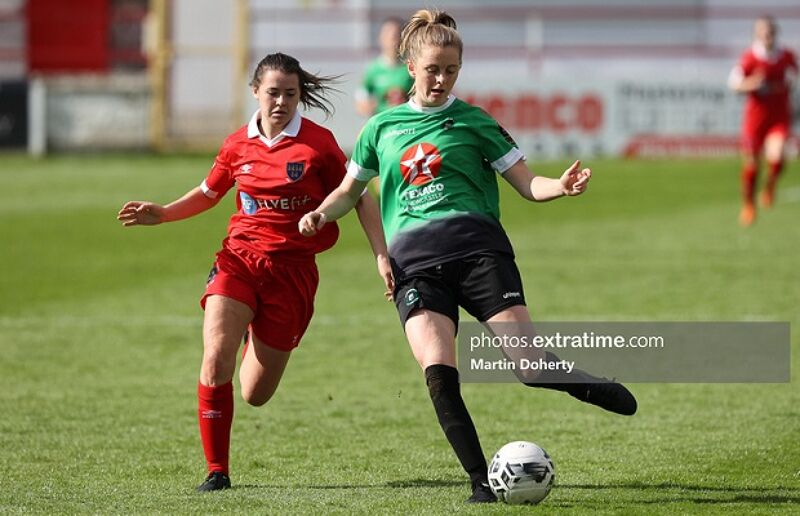 Champions Peamount United returned to the summit in spectacular fashion with a 6-1 win away to title rivals Shelbourne on Saturday afternoon.

Cork City stunned Wexford Youths with a 2-1 victory at Ferrycarrig Park, while DLR Waves picked up their first win of the season in Athlone and Galway edged out Treaty United at Eamonn Deacy Park.

Braces from Steph Roche and Eleanor Ryan Doyle, and one each for Lucy McCartan and Aine O’Gorman, saw the Peamount to a decisive victory at Tolka Park.

Jess Gargan netted a late consolation for the Reds, who held a one-point advantage before kick off againt their Dublin rivals.

The Peas took just three minutes to hit the front as McCartan dribbled her way through a maze of defenders before planting her shot into the bottom corner.

Ryan Doyle headed home to make it 2-0 eight minutes before half time and the visitors ran riot in the second half with four further goals.

Incase you missed this strike from our No.10 @EleanorRdoyle pic.twitter.com/NGrVVpFb5B

Ireland international Roche added two from close range before Ryan Doyle added her second with a spectacular strike from range.

Gargan diverted Izzy Atkinson’s free kick home to get Shels on the scoreboard but O’Gorman had the final say with a fine finish to a swift counter-attack.

Saoirse Noonan put Cork in front inside ten minutes as her left-wing cross ran all the way through to the net before Wexford captain Kylie Murphy levelled up minutes later.

Noonan turned provider for the winner inside the opening quarter, teeing up midfielder O’Mahony for a thumping long-range effort that flew into the top corner.

In the midlands, DLR Waves scored their first win of the campaign with a comprehensive 4-1 win over newcomers Athlone Town.

Goals from Katie Malone, Catherine Cronin and Ally O’Keeffe, as well as an own goal, saw Waves to victory after Kaitlyn Keogh had evened things up for Athlone early in the second half.

Finally, Chloe Singleton’s goal late in the first half saw Galway past Limerick’s Treaty United in a tight game at Deacy Park.