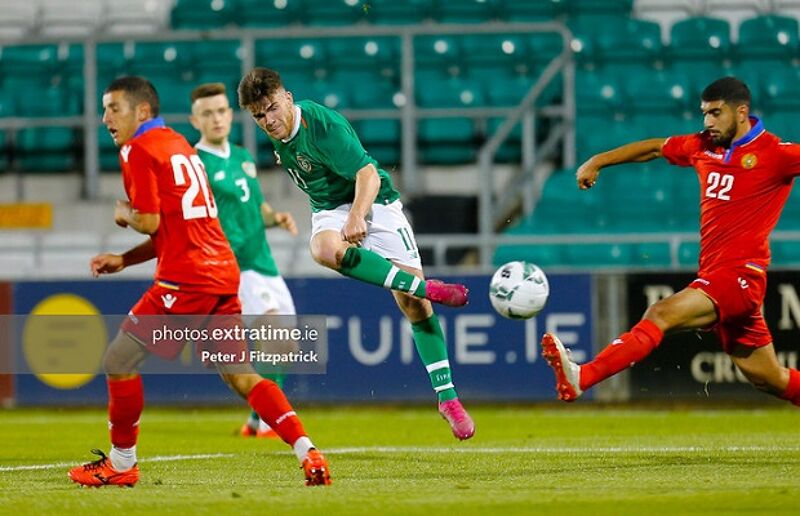 Brighton & Hove Albion’s Aaron Connolly had a weekend to remember as he scored in Brighton’s three-nil win over Newcastle United at St James’ Park.

Former Sligo Rovers full back and Republic of Ireland skipper Seamus Coleman made his 250th Premier League appearance for Everton in their 5-2 win over West Brom.

But perhaps most incredibly, Dundalk native Jimmy Dunne scored on his Premier League debut for Burnley in their 4-2 defeat away to Leicester City.

Meanwhile, Wes Hoolahan was also on target as Cambridge United swept to a five-nil win over John O’Sullivan’s and Liam McAlinden’s Morecambe.

Former Sligo Rovers full back and Republic of Ireland skipper Seamus Coleman made his 250th Premier League appearance for Everton in their 5-2 win over West Brom.

West Brom saw starts for defender Dara O’Shea and forward Callum Robinson but neither could stop the Toffees from easing to a victory at Goodison Park.

James McCarthy started for Roy Hodgson’s Crystal Palace in their 3-1 win away at Manchester United, while Darren Randolph was left on the bench as West Ham lost 2-1 away to Arsenal.

Matt Doherty gave away a penalty and was booked in Tottenham’s 5-2 win over Southampton at St Mary’s.

The Saints saw appearances for Will Smallbone and Shane Long while Irish under-21 forward Michael Obafemi was left on the bench.

Brighton and Hove Albion’s Aaron Connolly scored his first Premier League goal of the season as Brighton eased to a 3-0 win over Jeff Hendrick’s Newcastle United at St James’ Park.

Dundalk native Jimmy Dunne scored on his Premier League debut for Burnley in their 4-2 defeat away to Leicester City. Dunne was partnered in defence by Cork’s own Kevin Long.

However, there was concern for both Burnley and Ireland as Robbie Brady was forced off with an injury.

John Egan took the captain’s armband for Sheffield United, but he was sent off for a straight red card offence in the Blades one-nil defeat away to Aston Villa.

Conor Hourihane started the game for Villa in their win as both David McGoldrick and Enda Stevens also started for Chris Wilder’s side.

Derby County’s Jason Knight was once again on the end of a losing scoreline as his side fell to a 2-1 defeat away to Glen Rae’s and James Collins’ Luton Town at Kenilworth Road.

Alex Pearce started, and Shaun Williams came on as a sub as Millwall secured a vital one-nil win over a Rotherham United side that saw starts for former Cork City duo Chiedoze Ogbene and Kieran Sadlier.

Irish under-21 central defender Conor Masterson was left on the bench as QPR lost 3-2 away to Jordan Shipley’s Coventry City.

Elsewhere, Nathan Collins was left on the bench as Stoke City lost two-nil at home to Bristol City.

Kerryman Shane McLoughlin was on target for AFC Wimbledon as they played out a classic four-four draw with League One rivals Plymouth Argyle.

On target for Plymouth was former Irish under-21 Niall Canavan who scored in the 76th minute of the game to make it 4-3. Fellow ex Irish under-21 Callum Reilly started the game for Wimbledon.

Striker Joe Mason was on target as MK Dons, a side that included former Bohemians defender Warren O’Hora, lost against Lincoln City.

Lincoln saw Sean Roughan start while Anthony Scully was left on the bench in their win.

New Sunderland signing Aiden O’Brien did not find the target as the Black Cats defeated an Oxford United side that included Liam Kelly. Anthony Forde was left on the bench for Oxford.

Peterborough United midfielder and Irish under-21 Jack Taylor scored a 91st minute equaliser for the Posh in their dramatic 2-1 win over Fleetwood Town.

Cian Bolger and Michael Harriman both started for Northampton Town in their two-one away win over Shrewsbury Town.

Wes Hoolahan was also on target as Cambridge United swept to a five-nil win over John O’Sullivan’s and Liam McAlinden’s Morecambe.

36-year-old Alan McCormack made his Southend United debut in their two-nil defeat to Carlisle United as on-loan Dubliner Joshua Kayode made his mark off the bench with a goal for Carlisle.

Both Paudie and Anthony O’Connor were shown red cards as their Bradford City side drew two-all way to Forest Green Rovers.

Emmanuel Osabede and Liam Kinsella both played as Walsall drew two-all with Harrogate Town, while there was also plenty of Irish involved in the two-all draw between Leyton Orient and Mansfield Town.

Henry Charsely bagged an assist for Mansfield Town while Corey O’Keefe was brandished with a yellow card.

Leyton Orient’s Conor Wilkinson was left on the bench as was Mansfield’s Steven McLaughlin and Aaron O’Driscoll.

Lee O’Connor played the full ninety minutes while keeper Joe Murphy was left on the bench as Tranmere Rovers lost three-nil at home to Cheltenham Town.

There was also a start for Bradford’s Billy Clarke while Ian Lawlor was between the sticks as Oldham Athletic lost three-nil away to Stevenage.

Talismanic defender Shane Duffy played a full part in Celtic’s 3-2 win over Livingston at Celtic Park, while Danny McNamara was subbed off in St Johnstone’s one-nil defeat to Ross County.

Former Lilywhite Dylan Connolly scored off the bench as St Mirren – who included Jamie McGrath, Conor McCarthy, and Joe Shaughnessy in their starting side – lost two-one away to Dundee United.

Gary Dicker and Danny Rogers both started in Kilmarnock’s two-one over Hamilton Academical while keeper Colin Doyle was left on the bench.

Aberdeen’s Jonny Hayes and Tommie Hoban were unable to help the Dons avoid a heavy three-nil home defeat against Motherwell.

Rest of the World

Cillian Sheridan came on as a sub as his Wisla Plock side saw off Wisla Krakow by three goals to nil.

Former Cork City full-back Steven Beattie played a role off the bench as his Chattanooga Red Devils side were defeated at home to Greenville in the USL League One.

Meanwhile, former Ireland under-21 Robert Kiernan helped Orange County SC side to a one-nil win over Las Vegas Lights in the USL Championship.

John Disney started for Connah’s Quay Nomads as they defeated Penybont in the Welsh Premier League as both Dean Ebbe and Tom Holland were left on the bench in TNS’ two-nil win over Cardiff MU.

Graham Carey came off the bench in CSKA Sofia’s two-two draw with Ludogorets while former Finn Harps man Niall Logue played in Tucson’s one-all draw with North Texas in the USL League One as Wexford man Mikie Rowe played for Tormenta in their two-one win away to Fort Lauderdale.

In the MLS, Dundalk native Jon Gallagher scored and started in Atlanta United’s two-one defeat to Inter Miami. There was also a start for Jake Mulraney in the game for Atlanta.

Meanwhile, Dubliner Arron Molloy played as his Portland Timbers lost 5-2 at home to Reneo 1868 in the USL Championship.