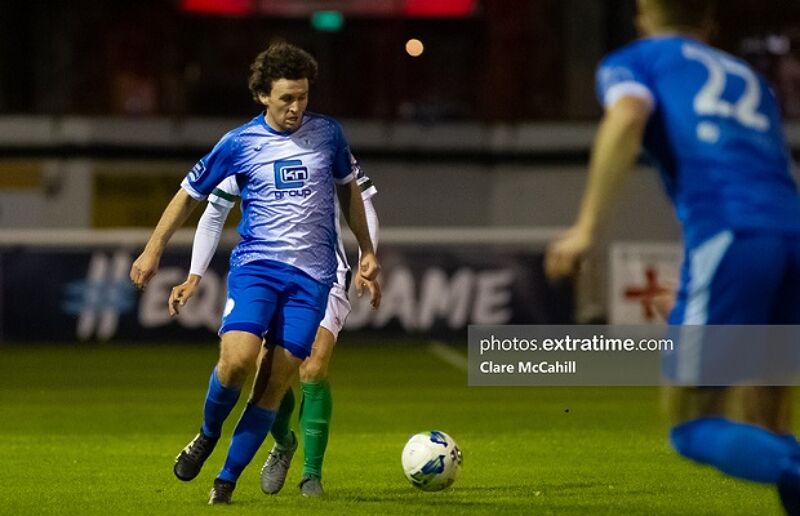 If Finn Harps manage to avoid the drop this season, they may look back upon this most unlikely point on a chilly Saturday evening in Dublin as one of the most vital.

The Ballybofey side were battered for the first 45 minutes, hard-working but listless with the ball at their feet, only to leave at full time unfortunate not to take three points.

Barry McNamee’s goal early in the second half may not have reflected the game to that point but was reward for manager Ollie Horgan’s critical half-time changes.

Ciaran Kilduff had headed the Reds into a deserved lead in the first half but they wilted after the break and finished with ten men after captain Luke Byrne was sent off in contentious circumstances.

It will feel like two points dropped, too, for the home side, for whom a win would have given further distance from the play-off spot now occupied by Harps.

Harps had goalkeeper Mark McGinley to thank for preventing Shels taking an early lead as a slick Shels move ended with the ball at the feet of Dayle Rooney.

The winger’s shot looked set to nestle in the net by McGinley got a firm hand behind it and Ciaran Kilduff was unable to bundle the loose ball behind.

The first half belonged to the hosts, who forced the Harps back five to sit deep and created a string of good chances.

McGinley was in top form again as he denied the excellent Denzil Fernandes from point blank range after the winger played a neat one-two with Georgie Poynton.

Shels continued to press the visitors and Poynton’s looping cross from the right was allowed to run through on goal and McGinley again was pressed into turning the ball behind.

Ollie Horgan’s side had run their luck, however, as the resulting corner saw Poynton pick out striker Kilduff, who buried his header from close range.

Despite being thoroughly outplayed, Harps may have gone in level had Stephen Folan been able to control Ryan Connolly’s ball to the back post.

Horgan recognised that something needed to change at the break, replacing Connolly with Raff Cretaro, but more important was the change in shape from 5-3-2 to a flat back four.

Karl O’Sullivan moved up front alongside Alexander Kogler and, with Cretaro probing from deep, the visitors were suddenly able to get on the ball and create their own chance.

Harps equalised inside nine minutes as, moments after Ryan Brennan saw his header saved by McGinley, McNamee found the back of the net.

Mark Russell’s shot from the edge of the area was spilled by Colin McCabe and playmaker McNamee was in the perfect position to be first to the loose ball and sidefoot home.

Now, Harps were the team in control and looked the more likely to add the scoreline, O’Sullivan seeing his shot deflected wide before Kosovar Sadiki headed wide from the resulting corner.

Shels had a penalty shout with 15 minutes remaining as substitute Aaron Dobbs collided with McGinley – referee Sean Grant judged the striker at fault and it looked a good decision.

More controversial was his decision moments later as he judged Luke Byrne to have impeded Kogler as he raced through on goal – a free kick and a straight red for the captain.

The defender did appear to lean in on Kogler on the edge of the box but Reds boss Ian Morris was of the opinion that he did so legally – the truth is often a grey area.

Rightly or wrongly, Harps were now fully in control and, though Folan’s free kick was blocked, the Donegal side created chance after chance.

A fantastic effort from Cretaro, as he dipped his shoulder and struck from 25 yards, was met by an equally impressive diving save from McCabe – some compensation for his earlier error.

Russell nodded a header just wide and substitute Sam Todd glanced another pinpoint McNamee delivery past the post, but they couldn’t manufacturer a winner and must settle for a point.