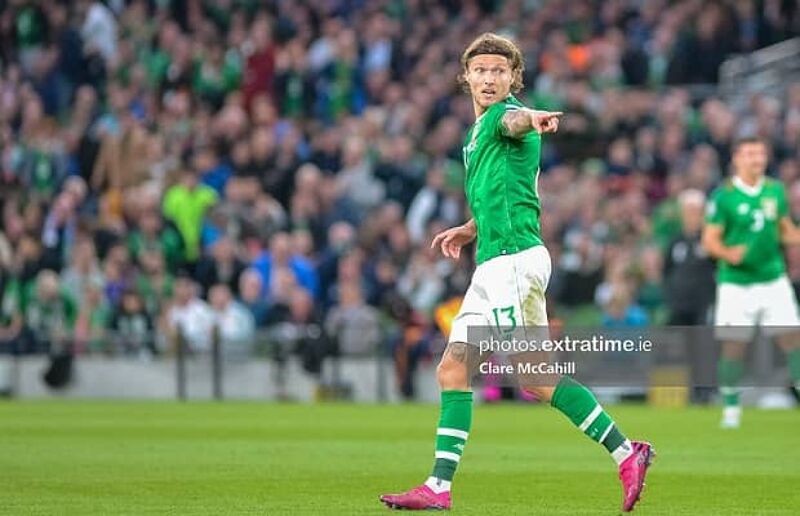 This weekend saw the return of the English football league pyramid – with several Irish players making their mark across the water and beyond.

There were debut goals for Irish senior internationals Jeff Hendrick and Shane Duffy, with Hendrick finding the back of the net for Newcastle during their two-nil win away to West Ham.

Duffy scored on his Celtic debut as they coasted to a five-nil win away to Ross County.

Adam Idah also got on the scoresheet as Norwich City secured an 80th minute winner against Huddersfield Town.

Dara O’Shea also made his Premier League debut for West Brom as did Matt Doherty for Tottenham Hotspur.

There was also a Women’s Super League debut for Denise O’Sullivan as Brighton held Manchester City to a scoreless draw.

There was battle between the two Irish full-backs Seamus Coleman and Matt Doherty as Coleman’s Everton secured a vital win away over Doherty’s Tottenham Hotspur at White Hart Lane.

Dara O’Shea started from the off and Callum Robinson was introduced as a sub, but the duo could help West Brom avoid an opening day Premier League defeat against Leicester City.

Shane Long and Will Smallbone both featured for Southampton who fell to an opening day defeat away to Crystal Palace – with Wilfred Zaha netting Palace’s winner. Michael Obafemi was unused sub for the Saints.

Darren Randolph was left on the bench as David Moyes’ West Ham fell to a two-nil home defeat versus a Jeff Hendrick inspired Newcastle.

Hendrick scored and assisted one as the Magpies went back up to Tyneside with all three points to begin their campaign in the grand manner.

Denise O’Sullivan, Rianna Jarrett and Megan Campbell all played for Brighton and Hove Albion who held free-spending Manchester City to a scoreless draw.

Harriet Scott could not help her Birmingham City teammates avoid defeat against Manchester United, as they lost by five goals to two against the Red Devils.

Elsewhere, Grace Moloney played between the sticks as Reading earned a three-one victory over Aston Villa.

Megan Mackey came on as a second-half sub in Lewes’ three-nil defeat away to Durham in the Championship, while Ruesha Littlejohn featured in Leicester City’s two-all draw against Sheffield United.

Adam Idah netted a second-half winner for Norwich City as they defeated Huddersfield Town by a goal to nil at the John Smith’s Stadium.

James Collins was on target as Luton Town began their season with an opening league victory of the season over Barnsley. Glen Rae also featured for Luton in their win away from home.

New Wycombe Wanderers recruit Daryl Horgan was unable to help his new side to victory in their first ever Championship game – losing one-nil at home to Kieran Sadlier’s and Chiedoze Ogbene Rotherham United.

Mark Travers started for recently relegated Bournemouth as they earned a three-two win at home over a Blackburn Rovers side that saw starts for Derrick Williams and Darragh Lenihan.

Alex Pearce and Shaun Williams both played for Millwall in their scoreless draw against Michael O’Neill’s Stoke City, while former Cabinteely schoolboy Jason Knight was unable to help his Derby County avoid defeat against Reading at home, losing two-nil.

Coventry City and Jordan Shipley could not begin life back in the second tier with a win as they fell to a 2-1 loss against Bristol City. Shipley, a former Irish under-21, came on as a second half sub.

Ryan Cassidy and Seamus Conneely both played Accrington Stanley began their 2020/21 League One campaign with a two-nil win over Peterborough United who had Irish under-21 Jack Taylor left on the bench.

Warren O’Hora and Joe Mason’s MK Dons secured a late point away to Doncaster United – with O’Hora making his first league start for the Dons at the Keepmoat Stadium.

John-Joe O’Toole and Stephen Quinn’s Burton Albion fell to a two-one defeat away a Fleetwood Town side that included Paddy Madden and Glenn Whelan.

O’Toole was dismissed late on for a straight red card with Madden netting a 79th minute winner for Joey Barton’s side.

Former Cork City defender Sean McLoughlin played as Hull City began life back in League One with a two-nil win over Gillingham.

17-year-old Sean Roughan made his first professional league start for Lincoln City alongside Zach Elbouzedi and Anthony Scully as they saw off Liam Kelly’s and Anthony Forde’s Oxford United by three goals to two.

Ronan Curtis could only see his Portsmouth side earn a home draw against Shrewsbury Town – while Gavin Bazunu, Jimmy Keohane, Eoghan O’Connell and Paul McShane all played in Rochdale’s 3-1 defeat against Swindon Town.

Aiden O’Brien was subbed off as Sunderland stuttered to a one-all draw at home to Bristol Rovers,

Eoin Doyle was unable to get his name on the scoresheet as his Bolton Wanderers side lost at home to Forest Green.

Richie Towell and Darron Gibson both played for Salford City as they earned a two-all draw against Exeter City who have former Bray Wanderers man Pierce Sweeney on their books.

Meanwhile, former Republic of Ireland under-21s Ian Lawlor and Conor Wilkinson both played as Oldham drew one-all against Leyton Orient, but Padraig Amond was left on the bench as Newport County drew against Scunthorpe United.

Shane Duffy found the back of the net to score his first Celtic goal as the Bhoys coasted to a comfortable 5-0 win away to Ross County.

Danny McNamara could not help his St Johnstone side earn a point away from against Motherwell – losing one-nil.

On Friday evening, Cillian Sheridan featured for his new Polish employers Wisla Plock, but he could not help them avoid defeat against Legia Warsaw at home.

Republic of Ireland Women’s international Clare O’Riordan was powerless as she saw her MSV Duisburg side fall to defeat against Bayer Leverkusen by two goals to nil, with Diane Caldwell’s SC Sand losing at home to Freiburg.

United States born Kyra Carusa scored twice in the second half as her Danish side Koge won four-one against AGF with Corey Whelan also playing in Phoenix Rising’s 5-1 win over Las Vegas Lights.

Former Finn Harps man Niall Logue played as his Tucson side lost against North Texas in the USL League One, while former Sligo Rovers star Richie Ryan was left on the bench as his El Paso Locomotive won two-one.

In the MLS, former Crumlin United schoolboy Jake Mulraney and Dundalk native Jon Gallagher were both introduced as subs as Atlanta United were defeated by four goals to two against Nashville SC.