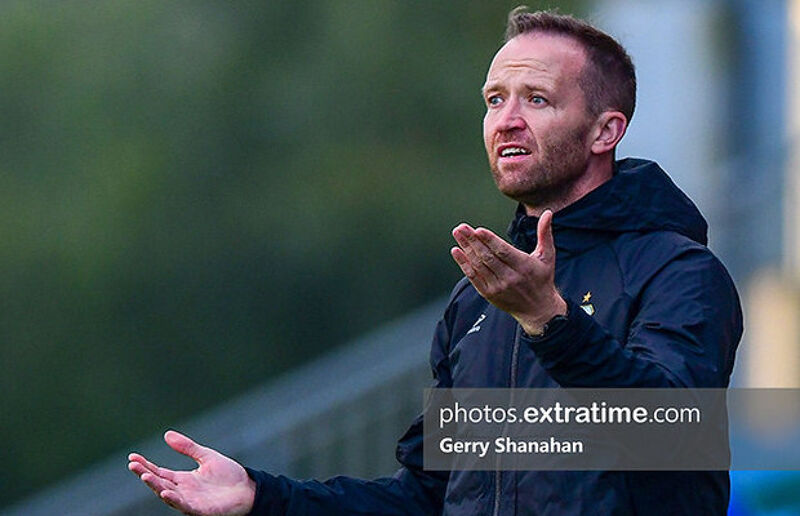 However, John Caulfield will happy to have garnered the three points as his side made it three league wins on the bounce.

The opening 20 minutes at Deacy Park was all Shamrock Rovers, with Galway chasing shadows, as Aaron Bolger & Brandon Kavanagh orchestrated matters from the centre of midfield.

That said they did not create any clear-cut chances except for a speculative shot from Kavanagh from over thirty yards out which Horgan dealt with capably.

The pattern changed completely on 25 minutes when Shane Duggan picked up a loose ball 35 yards out and blasted a rocket of a shot to the roof of the net.

While totally against the run of play it energised Galway and they were in control for the remainder of the half.

Rovers did show some more adventure late in the half, but apart from the goal the main highlight of the half had been the silky skills of Kevin Zefi – this 15-year-old is some prospect.

The second half started much like the first with Rovers playing with confidence and Galway stuttering. Galway manager John Caulfield got frustrated enough to make three substitutions on 61 minutes as he tried to turn his team’s fortunes around and copper fasten their lead.

Rovers introduce two replacements themselves five minute later with Dunne and Ryan joining the fray. As Galway tried to kick on an unfortunate error from Timmy Molloy who stood on the ball allowing Rovers to move the ball at lightning speed with Zefi involved before Leddy prodded the ball home.

Two more Galway subs after 75 minutes seemed to steady the ship with the experienced Vinny Faherty and Stephen Christopher joining the battle.

The final fifteen minutes saw the game swing from end to end with the technically better visitors looking dangerous while Galway’s subs added extra muscle to their cause.

The frantic scenes in the 93rd minute when Farragher grabbed the winner for Galway were more relief than anything. They were extremely lucky to win while Rover’s young ‘stars of the future’ will wonder how they left Deacy Park empty handed.

For the visitors Callan at the back was dominant while Bolger and Kavanagh in the middle enjoyed long periods of dominance.

In the attacking third Kevin Zefi looks really special – if this 15-year-old is protected he could be top class – he has been picked as my man of the match based on the audacious foot skills he showed tonight.

Galway saw some sporadically good passages of play but lacked consistency with Kevin Horgan probably their top performer on the night.