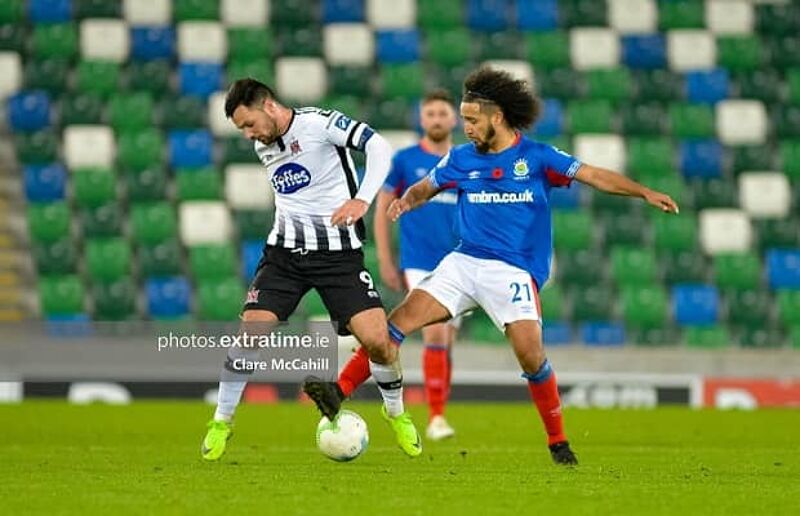 Dundalk could face Irish Premiership champions Linfield in the second qualifying round of the Europa League after UEFA confirmed their possible opponents ahead of Monday’s draw.

A replay of last season’s third round tie with Slovan Bratislava is also on the cards as well as Shamrock Rovers’ 2016 conquerors KuPS on Finland.

The Lilywhites may also be drawn alongside minnows Inter Escaldes of Andorra or Maltese champions Floriana when the names are picked in Nyon at midday on Monday.

Earlier on Sunday, Shamrock Rovers revealed they will face one of AC Milan, Zalgiris Vilnius or the side that knocked Bohemians out in round one, Fehervar of Hungary.

A meeting with Belfast’s most-decorated club would be intriguing as the two sides met competitively as recently as November in the Unite the Union Champions Cup.

Dundalk ran out comprehensive 7-1 winners over two legs, putting six past the Blues at Oriel Park following a 1-1 draw in the first leg at Windsor Park.

UEFA have confirmed our possible opponents in @EuropaLeague QR2.

It would also present a minimal logistical challenge for whichever side is drawn away from home as just 52 miles separate Belfast from Dundalk and no quarantine exemption would be required.

Less welcome would be the highest-ranked side in the pot, Slovak champions Slovan Bratislava, who beat Dundalk 1-0 at home and 3-1 in Tallaght as the Lilywhites bowed out in 2019/20.

Slovan would go on to beat PAOK on away goals in the play-off round and finished third in a group containing Braga and eventual semi-finalists Wolverhampton Wanderers.

The most favourable draws would be the lowest-ranked sides, Inter Escaldes and Floriana, for new manager Filippo Giovagnoli’s first European test since assuming the reins last week.