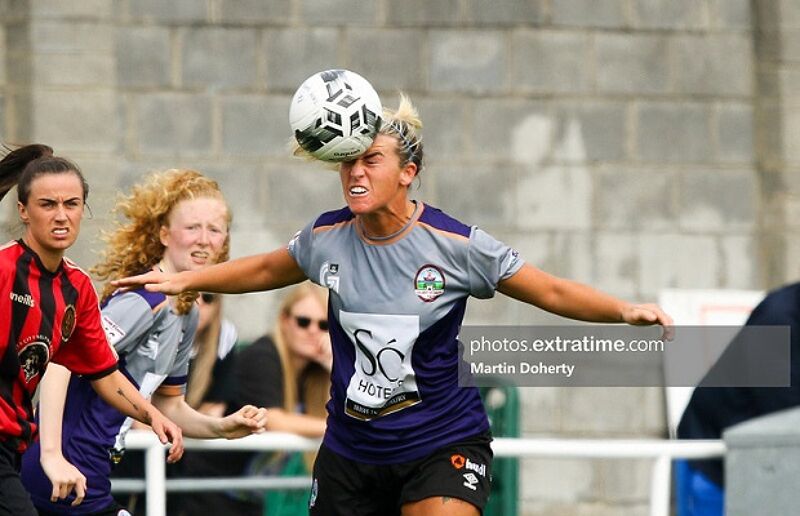 A hat-trick from veteran midfielder Lynsey McKey was enough to see off the WNL, despite a spirited performance from Tommy Hewitt’s side.

The game was played behind closed doors with the new restrictions from the Irish Government preventing spectators at sporting events coming into effect for the first time on Wednesday.

There was added interest to the tie with four former Galway players lining out for the newcomers to the WNL— Leah Brady, Kayla Brady, Roisin Jacob and Kellie Brennan.

The Galway Girls almost conceded in the first minute after a lapse in concentration from Amanda Budden when the goalkeeper played a lazy pass in the box straight to Katelyn Keogh.

She would have had an empty net to stroke the ball into if it wasn’t for the sliding intervention of captain Keara Cormican.

Budden was involved again in the sixth minute after a long ball beat the defence and fell to Kellie Brennan but the goalkeeper advanced quickly enough to smother the shot and deflect the ball away.

Galway got their first chance of the game in the 12th minute when some hesitant defending from Athlone allowed Ellerose O’Flaherty to sneak in and steal the ball from Robyn Heatherington.

The ball rolled to Aoife Thompson, but her snapshot was saved by Niamh Coombes in the Athlone goal.

Leah Brady denied her former club after a great passage of play started by O’Flaherty when she stormed through the centre of the field before threading the ball through to Thompson.

Thompson nicked the ball across the goal for McKey to just roll the ball over the line but Leah Brady stopped the ball dead on the line.

The home side made the breakthrough ten minutes before half time after a searching through ball from Savannah McCarthy was picked up by Leah Brady inside the Athlone box.

The defender had the ball stripped from her from behind by McKey, who took a quick touch and slipped the ball past Coombes and into the net.

McKey came close to doubling the lead twice early in the second half, first with a long range effort that Coombes just managed to keep from the top corner, and then the midfielder rattled the woodwork with a free-kick from the edge of the box.

The midfielder got that second goal in the 71st minute after Shauna Brennan won possession after being winded by a hard ball to the stomach.

McKey picked the ball up with her back to the goal, she turned and smashed the ball into the goal from long range.

Athlone had their half chances and, ten minutes from time, Kayleigh Shine had an effort from long range but Budden wasn’t troubled by the shot and made the easy save.

In the dying minutes McKey found herself alone in front of goal after a perfect through ball from second half substitute Sinead Donovan. The midfielder made no mistake as she easily slotted the ball past Coombes to secure her hat-trick.