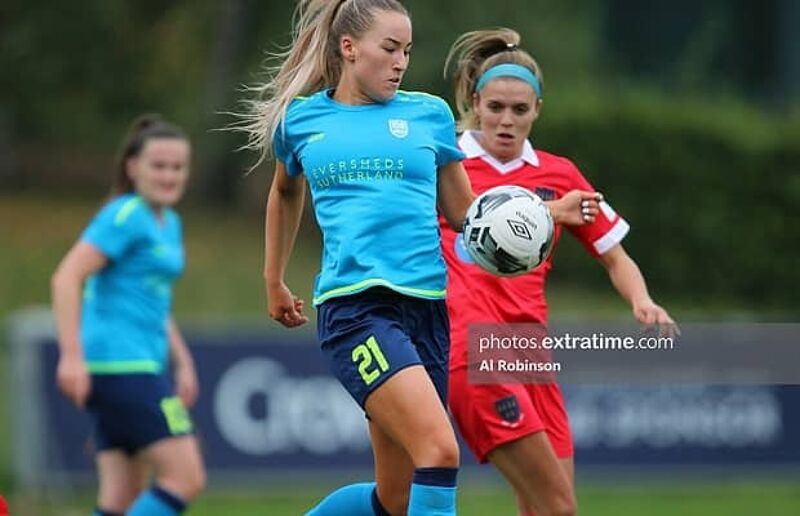 Shelbourne kept pace with champions Peamount United at the top of the Women’s National League but only just following Pearl Slattery’s last-gap winner at DLR Waves.

The skipper’s header in the fourth minute of injury time earned her side a 2-1 win and ensured Dave Bell’s side made it two wins from two since the league kicked off last week.

There were nervy moments too for Wexford Youths, who were pushed all the way by league debutantes Athlone Town before Aisling Frawley’s late goal settled the tie.

Peamount had a much easier time of it in Bishopstown on Sunday afternoon, however, as three first-half goals saw them to a comfortable 3-0 win over Cork City.

And Galway picked up their first win of the season as they overcame Bohemians 4-1 in their first home National League game, all the goals coming in the second half.

If there was high drama to be had it was at a sold-out (Covid restrictions notwithstanding) UCD Bowl as DLR Waves welcome Shelbourne for the first Dublin derby of the season.

A high-intensity affair saw a vastly-improved Waves side take it to last season’s runners up for an hour before Ciara Grant opened the scoring.

The Letterkenny native made it two from two as she raced onto an Alex Kavanagh pass and lifted the ball over the advancing Eve Badana.

Waves were not prepared to roll over, however, and they levelled 11 minutes from time when Niamh Prior caught Shels keeper Rachael Kelly off her line from a free kick.

Waves looked to have done enough to earn their first draw against Shels in three years but Slattery had other ideas, glancing home an Izzy Atkinson cross with style deep in injury time.

Over in the midlands, Athlone’s first-ever league game, and in front of a capacity crowd, was going as good as could be expected with the scores tied at 0-0 going into the final 20 minutes.

The FAI Cup holders tend to find a way to win, however, and they did just that when Vanessa Ogbonna found space on the right-hand side of the box and teed up Frawley for a tap-in.

In Saturday’s early afternoon game at the Oscar Traynor Centre, Galway left it late to put a 4-1 scoreline on newgirls Bohemians.

Despite losing goalkeeper Courtney Maguire to a first-half red card, Bohs held on until the 52nd minute against a ruthless Galway outfit.

Aoife Thompson put the visitors in front seven minutes after the interval but Sean Byrne’s side hit back when Bronagh Kane levelled things up.

Shauna Fox’s header put Galway back in front and further goals from substitute Ellerose O’Flaherty and Thompson wrapped up the win.

In Sunday’s only game, Peamount got their work done early with three goals in the opening 12 minutes.

Eleanor Ryan Doyle added a third following good work from O’Gorman and Peamount, who lost Louise Masterson to a late red card, remain top of the table on goal difference.