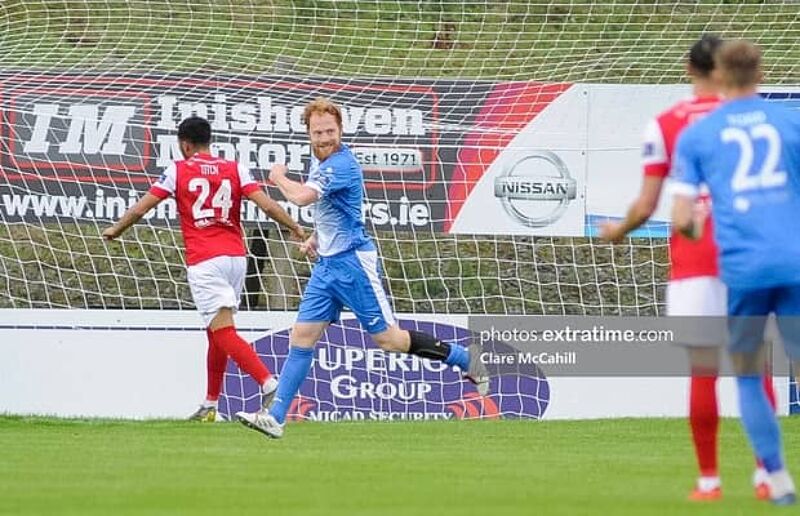 Finn Harps are through to the second round of the Extra.ie FAI Cup thanks to a Ryan Connolly goal as the home side escaped with a 1-0 victory at Finn Park.

The midfielder capitalise on an error from Saints keeper Conor Kearns to slot the ball into an empty net after just five minutes.

Having lost 2-0 to the Dublin outfit only four days ago in the league, Ollie Horgan made four changes as his side looked to progress to the second round of this years’ competition.

Without a goal in their last two matches, this one couldn’t have started in a better fashion for the hosts with Connolly finding the net just five minutes in.

Connolly was the intended target of a cross from the right side by Karl O’Sullivan and it looked as if it was easy to gather but a mix-up between debutant Kearns and Rory Feely allowed the Harps man to tap into an empty net.

A well struck free-kick from Stephen Folan - who made his debut at Inchicore - brought the best out of Kearns five minutes later with the shot-stopper saving low to his left hand side.

Pats replied with a free kick of their own not long after, Jamie Lennon the kick taker. It was well saved by Mark McGinley and, fortunately for him, Darragh Markey skied the rebound.

Chances dried up a little bit as the half hour mark approached with both sides looking good in possession but the final third passes were intercepted more often than not.

Harps looked threatening from set-pieces and had a number of chances to take advantage but it was the visitors who struck the last decent effort of the half.

After a low ball in from the right, Martin Rennie took a delicate touch to lay the ball off for Markey to have a pop at goal, but the shot fizzed past McGinley’s right hand post.

The second half nearly started in a similar style for Harps who came close to a second goal but the woodwork denied Sam Todd after a looping header from close range.

Shortly after in a bid to at the very least force extra time, Stephen O’Donnell made a triple substitution, bringing on Robbie Benson, Georgie Kelly and Chris Forrester.

Benson only recently signed after a long spell with Dundalk, while Kelly is on loan from the Lilywhites.

Forrester, meanwhile, can list Peterborough United and Aberdeen amongst his former clubs so, all in all, a pretty good bench to call upon.

Harps had a wave of attacks in and around the hour mark as they piled further pressure on the travelling side. After several clearances, Todd headed over, much to his annoyance.

Soon Pats began to ask questions of the home defence. Kelly glanced a header wide while Benson also went close with an effort from just inside the box.

The last 15 minutes of the game was mostly a barrage on the Harps backline.

Ball after ball over the top from Pats, hoping for a kind bounce, rained but Harps held strong to earn their first win since the 14th of February and a spot in Wednesday's second-half draw.